RRR presents... THE MAIDEN AND THE MERCENARY by Nicole Locke - REVIEW + GIVEAWAY!

Today, we're back from turkey day with another Rachel's Random Resources tour featuring a work of Historical Romance, but this time, we're heading more along the lines of medieval times than that of the regency era.  Note to self, I found myself initially out of my element, but one things got going, I was hooked...for anyone that may have been wondering where one time period would differ that much from another when reading, my answer is a resounding YES!  But I digress, let's get on with the show because there was much showing and sometimes telling going on between the pages of today's blog tour guest and book of choice... 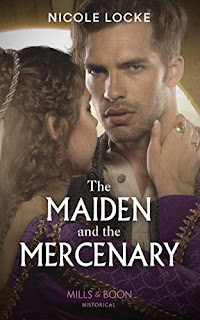 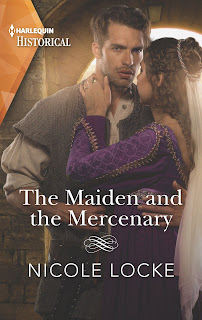 The Maiden and the Mercenary
by
Nicole Locke
Mills & Boon/Harlequin Historical
About the book...
Keep your friends close…
But your enemies closer?
In order to find a legendary treasure map, mercenary Louve of Mei Solis must infiltrate his enemy’s fortress under the guise of a servant. There, Louve meets beautiful maiden Biedeluue, a fellow servant with her own hidden agenda…to save her sister from the malevolent Lord’s clutches! Their high-stakes missions may be at odds with one other, but their attraction cannot be denied even in this most dangerous of situations…
AMAZON  US  |  UK
~~~~~~~~~~~~~~~~~~~~~~~~~~~ 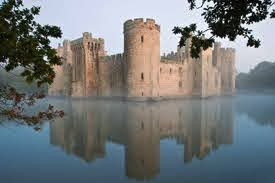 What did I love about thee?
Let me recant the ways...or rather the situations!
Seriously guys, these two get into all sorts of shenanigans right from the start!  A favorite scene?  Ooh...that's a tough one.  Let's see, there's the initial goblet stacking scene (which was definitely not one of Bied's finer moments) in which she's not only trying to out drink/stack a fellow "competitor", but keep her own goblets out of the way of knocking everything over, if you know what I mean!  Then there's Louve trying to act the part of a lowly Usher (let's just say his acting skills leave much to be desired...and he's already desirable!), accomplishing said task (sort of), and being granted a higher position albeit temporary (sort of) by a less than above the bar Steward (seriously guy, goblets?  That's your important mission? *cough cough*  Yeah, I believe that for a nanosecond...).  Next we have the day after scene in the kitchen...and by that I mean Bied's vague attempt to step into the cook's roll wearing an overly flattering (not really) dress that will serve her well as it distracts those she is serving from the less than palatable food (hahaha!).  But then there's her nighttime drinking party with the barrels, the ladle, and an uninvited (yet not wholly unwelcome) guest, their time spent inspecting the previous mentioned kitchen (and I mean inspecting in a not for cleanliness way!), their new found closet space (let your imagination roam!), and a myriad of others situations I warned you they get into, up to, and so on!
There are some serious things going on as well though, so it's not all "fun" and games...okay, so it is a lot of games, but not in the way you think!  The Warstones are a formidable family, but they are also all pretty much trying to kill one another, and by book's end, someone (though you may not guess who!) definitely falls...much of this particular game is where Louve is either pawn or master.  The formidable family has skeletons in its closets as well though, and also a mistress who may be being kept against her will...which is whom Bied means to free!
So you see, not all simply trysts, drunken madness, and broken goblets.  Definitely spying, espionage, kidnapping, and rescues needing to be made!  Sound like something you'd like to get lost in?  Good news...it's available now, so seek thee out a copy and get to know this curious duo you never saw coming!
~~~~~~~~~~~~~~~~~~~~~~~~~~~
About the author... 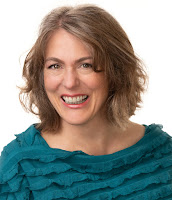 Nicole [Locke] first discovered romance novels hidden in her grandmother’s closet. Convinced that hidden books must be better, Nicole greedily read them. It was only natural she should start writing them (but now not so secretly).
SITE  |  FACEBOOK  |  TWITTER  |  INSTAGRAM
~~~~~~~~~~~~~~~~~~~~~~~~~~~~~

Chance to Win a £20 / $20 Amazon Gift Card
(Open Internationally)
*Terms and Conditions –Worldwide entries welcome.  Please enter using the Rafflecopter box below.  The winner will be selected at random via Rafflecopter from all valid entries and will be notified by Twitter and/or email. If no response is received within 7 days then Rachel’s Random Resources reserves the right to select an alternative winner. Open to all entrants aged 18 or over.  Any personal data given as part of the competition entry is used for this purpose only and will not be shared with third parties, with the exception of the winners’ information. This will passed to the giveaway organiser and used only for fulfilment of the prize, after which time Rachel’s Random Resources will delete the data.  I am not responsible for despatch or delivery of the prize.
a Rafflecopter giveaway
~~~~~~~~~~~~~~~~~~~~~~~~~~~~~~~

Special thanks to Rachel at Rachel's Random Resources for the chance to bring this tour to you and to the author for the signed edition for review. (THANK YOU!) For more information on this title, the author, this promotion, or those on the horizon, feel free to click through the links provided above. This title is available now, so click on over to your favorite online retailer to snag your copy today and be sure to check out the rest of the tour for more bookish fun! 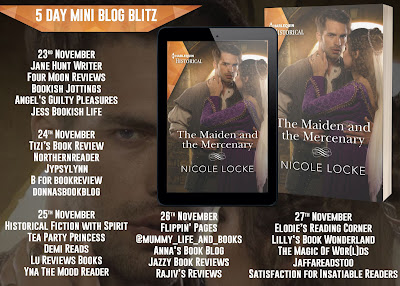 Until next time, remember...if it looks good, READ IT!
Posted by Gina at 12:00 AM No comments:

Today, we've got another Rachel's Random Resources tour starring a Historical Fiction title you won't want to miss!  It had me nostalgic for one of the first of this genre that I read so many books ago (it was from the Wild Warriner's series by Virginia Heath and yes, you should totally check it out after reading this post!) not only for that shared shelf space, but the basic storyline, and the wonderful characters.  But I digress, let's get the introductions done properly so we can REALLY dive in!  Ladies and gents, get ready as we welcome today's blog tour guest and ebook of choice... 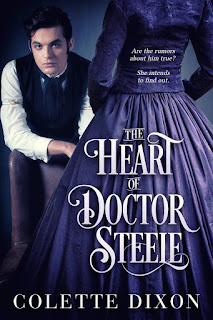 The Heart of Doctor Steele
by
Colette Dixon
About the book...
Are the rumors about him true? She intends to find out.
The mysterious Dr. Steele has taken up residence next door, and scandalous rumors about him are spreading through Margaret Landeau’s small Massachusetts town. Rumors of women he’s ill-used and exploited for his experimental surgeries. Never one to believe gossip, Margaret arms herself with a basket of baked goods and ventures to discover the truth from the man himself.
John Steele has lost everything. His parents, his aunt, too many women he intended to save, and his good name. All he has left is his aunt’s home in a far-flung village and a library he’s stocked with whiskey. He has nothing to offer anyone. Especially not the bold woman next door whose passion for healing reminds him of the man he once was.
But when a dangerously ill girl arrives on his doorstep, pleading for help, Margaret is thrust into his world. She will learn who the real Dr. John Steele truly is, and soon, not even his dark past can stop her from fighting for the brilliant doctor she now loves. But he must deny his crushing desire for her—loving a man like him can only cast a shadow over her own bright future.
--->   SNAG YOUR COPY TODAY   <---
~~~~~~~~~~~~~~~~~~~~~~~~~~

Did I mention I really liked this one?
Oh...good.  Because yes, yes I did.
So, the short and sweet of it all is we've got an unconventional lady of her time, and the similarly unconventional man that happens to land right next door after the passing of his aunt. Margaret is forward thinking, unlikely to judge without proof against which to measure, and trusts her heart...which until now, hasn't been affected nearly as much as by the gorgeous blue eyes of one Doctor Steele.  The good doctor, for his part, claims to be anything but good as he is running from a past that won't let him be, and trying to find his way beyond it at the bottom of a bottle.  Good thing Margaret doesn't take no for an answer!  Good thing she can see past the downtrodden exterior and to the heart of the man that beats strongly beneath.  Through her, he begins to gain his footing...and yet also through her, he may ultimately break his heart for good, unless he let's her into every corner of that same said heart to lay everything bare and accept what fate (and love!) may bring...
Again with the whole I LOVED IT bit, but as I said...the characters are well written, the back stories had depth, the message of second chances was received loud and clear, as was that of Margaret's methods of people being innocent until proven guilty.  I adored her character for all her strength, the perceived weaknesses turned attributes, and the way she never gave up.  I adored his character for his strength of heart even when it seemed completely used up, his ability to accept (eventually) what/who he truly was, his desire to take back what was taken from him, and let's face it, his skilled hands and forward thinking were nothing to shy at either!
So, if you're a fan of Historical Fiction and love a good Romance angle as well, this is SO the book for you and yours this holiday season, or any season for that matter!
~~~~~~~~~~~~~~~~~~~~~~~~~~
About the author... 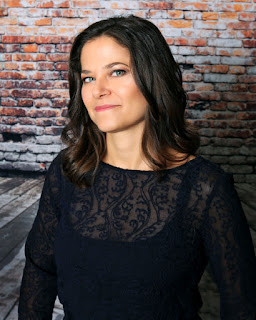 Colette Dixon writes steamy stories with heart and humor about slightly tortured people who learn how love can heal. For more years than she cares to admit, she worked in a hospital while dreaming up love story plots. A farm girl who landed in Chicago, she loves to eat (food made by others), drink tea, and sun herself at every chance she can get to survive the Midwest winter.
TWITTER  |  INSTAGRAM  |  FACEBOOK
~~~~~~~~~~~~~~~~~~~~~~~~~~~~~~~~ 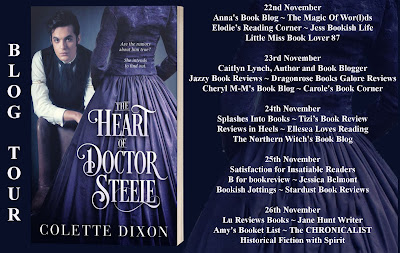 Until next time, remember...if it looks good, READ IT!
Posted by Gina at 12:30 AM No comments: