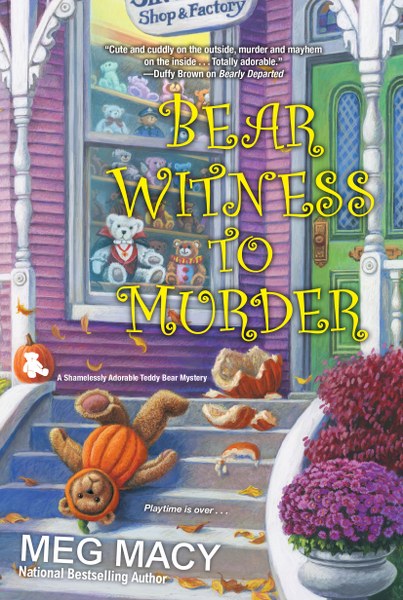 “Cute and cuddly on the outside, murder and mayhem on the inside . . . Totally adorable.” —Duffy Brown on Bearly Departed
As autumn air settles into the quaint small town of Silver Hollow, there’s nothing more popular than Sasha’s teddy bears—and murder in cold blood . . .
Silver Bear Shop and Factory manager Sasha Silverman is cozying up to the fall season by hosting Silver Hollow’s Cranbeary Tea Party, the opening event of the village’s Oktobear Fest—a too-cute celebration themed around teddy bears. She barely has a moment to agonize over the return of her former high school rival, Holly Parker, whose new toy and bookstore in town could spell big trouble for the Silver Bear Shop and her cousin’s small bookstore . . .
But when Sasha discovers Holly’s shop assistant dead with a knife plunged in her body, the unpleasant woman suddenly looks like a real backstabber. So does Sasha’s ex-husband, rumored to have rekindled the fiery extramarital affair he once had with the victim. Now, before a gruesome homicide case takes the fun out of both the Fest and her personal life, Sasha must identify the true culprit from a daunting suspect list—or risk becoming as lifeless as one of her stuffed bears . . .

The village clock struck the half hour while we walked down Theodore Lane. I heard a car’s rumbling muffler ahead of us, probably on Kermit, and hurried past Holly’s corner shop. Once across the street, Rosie led the way to the Sunshine Café; the fog parted, showing Uncle Ross’s vintage pale blue Oldsmobile parked at the curb. He always drove the car in the village Memorial Day and Labor Day parades, chock-full of teddy bears, but never offered anyone a ride if he could help it.
My uncle cussed a blue streak if any speck of dirt marred the leather seats, and he routinely checked the polished fenders for any scratches or nicks.
I caught sight of his grizzled beard and cap through the window. Mayor Bloom sat with him at the counter. Dad and Gil Thompson usually joined them for coffee and the café’s popular French toast, but they hadn’t yet returned from up north.
Past the half-hidden brick library, I cut through a stretch of blacktop to Church Street. It wasn’t easy navigating in the denser fog. Rosie nosed her way through the narrow alley between Abby Pozniak’s antique shop and Blake’s Pharmacy until we emerged into the mist-covered graveled parking lot.
Shadowy forms that loomed in our path turned out to be parked cars, a Dumpster, and a mailbox. I stepped cautiously over the stones.
“Ouch!” I’d hit my shoulder on a lamppost that appeared beside me. I peered at each parked car in the uneven lot. At last I found mine and unlocked the door. Rosie’s whining suddenly turned into loud barks. That meant trouble.
“What is it, girl?” She wouldn’t budge, so I followed the leash hand over hand.
I found Rosie guarding an inert form on the ground, right beside a blue MINI Cooper. Was it Holly Parker? My heart jumped into my throat. The jacket’s hood covered her head. I stood gaping, frozen in place. My brain couldn’t register for several minutes. Letters sparkled in the dim light on the hoodie’s pale pink fabric. THINK, that was clear enough to read, but PINK was darkened by a mottled brown stain.
So was the knife hilt embedded in her back.

Praise For Bearly Departed
“You’ll fall in love with this delightful debut mystery.” —Victoria Thompson, bestselling author of Murder in Morningside Heights
“The first in a new series features a complex plot awash in red herrings, a perky heroine . . . and everything you ever wanted to know about teddy bears.”—Kirkus Reviews
“The appealing, impulsive amateur sleuth, dedicated to the family business, will appeal to fans of character-driven cozies.” —Library Journal
“Entertaining . . . inhabited by quirky, fully developed characters and good dogs and cats.” —Publishers Weekly 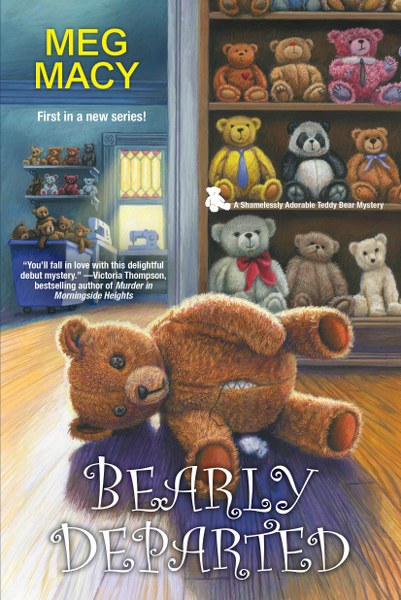 “You’ll fall in love with this delightful debut mystery.” —Victoria Thompson, bestselling author of Murder in Morningside Heights
The Silver Bear Shop and Factory might be the cutest place around, but there’s nothing warm and fuzzy about murder . . .
As manager of the family teddy bear shop and factory, thirty-one-year-old Sasha Silverman leads a charmed life. Well, except for the part about being a single divorcée with a ticking biological clock in small-town Silver Hollow. And that’s just kid’s stuff compared to Will Taylor, the sales rep who’s set on making drastic changes to the business her parents built from scratch—with or without Sasha’s approval . . .
But before Will digs his claws in, someone pulls the stuffing out of his plan . . . and leaves his dead body inside the factory. Reeling from shock, Sasha’s hit with more bad news—police suspect her hot-tempered Uncle Ross may have murdered him. Sasha knows her uncle would never do such a thing, and she’s launching her own little investigation to expose the truth. As she tracks Will’s biggest rivals and enemies for clues, Sasha can’t get too comfy—or she’ll become the next plaything for a killer . . .
“A twisty mystery tale with a likable protagonist and a colorful supporting cast. Sure to be a very enjoyable series!”—Livia J. Washburn, bestselling author of Black and Blueberry Die
“Cute and cuddly on the outside, murder and mayhem on the inside—I love this book!!! Totally adorable.”—Duffy Brown, bestselling author of Braking for Bodies 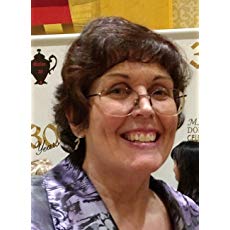 Meg Macy is an award-winning author and artist. Her first published book, Double Crossing, won the 2012 Spur Award for Best First Novel from Western Writers of America. Meg is also one-half of the writing team of D.E. Ireland, authors of the Eliza and Henry Higgins Mystery series—of which two titles have been Agatha Award finalists. Meg lives in Southeastern Michigan, the setting for her Shamelessly Adorable Teddy Bear mysteries.

The cover is delightful and perfect for this story and is colorful and unique.