99 Percent Mine by Sally Thorne 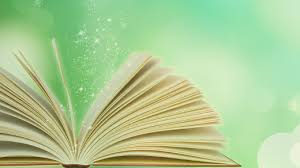 Life goes on, but the way we measure it varies depending on our point of view.  One of my favorites ways is PAGE BY PAGE, and that brings us to today's title in the spotlight.  It's a book that celebrated its BIRTHDAY this week (*blows party horn*) from an author whose work I fell in love with at first read.  Remember THE HATING GAME?  Yeah, so do I and it was SO GOOD!  Loved it so much I almost wanted to marry it...okay, well maybe not, but you get my meaning...so when I saw another release from this talented writer initially "coming soon", I made room on my wish list.  Having just come off the high of reading it cover to cover, I'm filled to the brim with reactions and feelings...some of which surprised even me...but I digress.  Let's introduce this starlet properly.  Today's book of choice is... 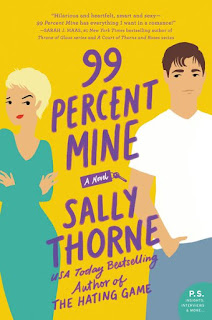 About the book...
Crush: a strong and often short-lived infatuation, particularly for someone beyond your reach…

Darcy Barrett has undertaken a global survey of men. She’s traveled the world, and can categorically say that no one measures up to Tom Valeska, whose only flaw is that Darcy’s twin brother Jamie saw him first and claimed him forever as his best friend. Despite Darcy’s best efforts, Tom’s off limits and loyal to her brother, 99%. That’s the problem with finding her dream man at age eight and peaking in her photography career at age twenty—ever since, she’s had to learn to settle for good enough.

When Darcy and Jamie inherit a tumble-down cottage from their grandmother, they’re left with strict instructions to bring it back to its former glory and sell the property. Darcy plans to be in an aisle seat halfway across the ocean as soon as the renovations start, but before she can cut and run, she finds a familiar face on her porch: house-flipper extraordinaire Tom’s arrived, he’s bearing power tools, and he’s single for the first time in almost a decade.

Suddenly Darcy’s considering sticking around to make sure her twin doesn’t ruin the cottage’s inherent magic with his penchant for grey and chrome. She’s definitely not staying because of her new business partner’s tight t-shirts, or that perfect face that's inspiring her to pick up her camera again. Soon sparks are flying—and it’s not the faulty wiring. It turns out one percent of Tom’s heart might not be enough for Darcy anymore. This time around, she’s switching things up. She’s going to make Tom Valeska 99 percent hers.

Darcy Barrett was a force to be reckoned with, a take no prisoners, kick-a** ex (sorta) photographer and sometimes bartender that can certainly handle herself, but needs that one-on-one contact (friendly or otherwise) to fulfill her hunger.  Sounds more sexual than it was meant, but then again...there was THAT angle too.  Anywho...she's a strong female lead to be proud of, and while I'd like to wash her mouth/mind out with soap (sorry, but she's a bit too crass for my taste...and yes, I'd say the same if it was the male lead with the mouth), she definitely keeps things interesting.

Tom Valeska...perfect man specimen, if ever there was, that has the looks, the modesty, the balanced ambition, correct priorities...and if you think it's a "too good to be true" situation, it is, but only on the most minimum of levels.  He's known Darcy and her twin brother (Jamie) since childhood, been the benefactor of their generosity (whether he wanted it or not) day in and day out, and been harboring feelings for one of them just...as...long.  That's A LOT of tension to build up, and despite the fact that someone else made an appearance on his arm for some length of time, some flames can't be doused...only FED.  He's a sweetheart that puts way too much pressure on himself, but memorable.

Here's the catch...they're both great, and their connection palpable, but the pieces set to connect them from point A to point B...I wasn't as sold on.  For me, the drama of "should they, shouldn't they" was drawn out, I didn't quite buy the twin connection/fight nor did I particularly care for Jamie, and the grand finale wasn't as grand as I was hoping.  I've been told (or rather saw online) that the final print includes an epilogue that the ARC does not...perhaps that solves my last "issue".  In the end, while I wanted to be blown away, I was simply entertained.  Grant it, that's not a bad thing, but it also left me wanting.  Cie la vie...while it wasn't my all time favorite, it just may be yours, so do GO OUT AND GET IN THE PAGES of your own copy, just make sure you're adult age because yeah, there's words, and fantasies, and situations that are more than blush worthy.

Sally Thorne lives in Canberra, Australia, and spends her days writing funding submissions and drafting contracts (yawn!) so it's not surprising that after hours she climbs into colorful fictional worlds of her own creation. Sally believes that romance readers are always searching for intensity in their next favorite book--and it isn't always so easy to find. The Hating Game is her first novel.

Special thanks to the William Morrow team for the ARC for review.  (THANKS!)  For more information on this title, the author, or the publisher, feel free to click through the links provided above.  Remember, this title just celebrated its book birthday this Tuesday, so be on the look out for it on a bookstore shelf or virtual retailer of your choosing...and share a little celebratory love with the author on your favorite social media channel!