By Jove! Could it be?: Vanishing Girl by Shane Peacock

How are you this jolly fine day?
Good I trust.

Today we shall be exploring the merry adventures, or rather not so merry escapades, of a young literary lad you may be familiar with and yet not.  You see, many know him as he is now or rather in adulthood, but not nearly as many can recall his childhood days.  Curious as to whom I speak of?
By Jove, it's Sherlock Holmes! That's right!  Today's post features this notorious character only in his younger days and with a rather large learning curve to still tackle.  It is part of a series, the third installment in fact, and whilst it is usually a good idea to start at the beginning, surprisingly this one is rather enjoyable on its own.  Enough of this idle chatter, the game is afoot!  Today's book of choice is.... 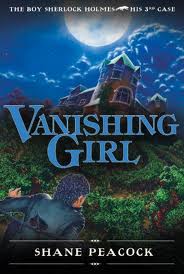 It was a dark and stormy night; one that would sooner draw shadows and catch death than a good night's sleep.  The townspeople were all snug in their beds; dreams undisturbed by the crime about to be committed...and what a crime it shall be.  The victim?  One Victoria Rathbone...the 14-year-old daughter (and heiress) of the distinguishable Lord and Lady Rathbone frequently seen in the best of circles and known of in those in lesser standing.  It is perhaps time that this family that is looked up to by the general populous, yet looks down upon the common man in private, gets their comeuppance; after all, even the most grand estates can have skeletons in its closets...often times more than anticipated.

What reason how the scoundrals for taking young Victoria?  Will she in fact make it back to her high end family and the life she loved?  It could get a bit dodgey...especially when things begin to drag on for weeks at a time without word from the kidnappers.  What exactly do they intend on gaining from there self created game without a ransom note or threat?  Lead Inspector Lestrade may not have a clue to start with, but he intends to find out one way or another....and he hopes to before a certain young man with a crooked nose and an aptitude for solving mysteries beats him to the final revelation once again.  The game is afoot...may the best detective win.

Okay, so truth be told...it wasn't really a "darky and stormy night"...in fact it was in broad daylight whilst the young heiress was parading around the darker side of town so that those in low places could catch a glimpse of her magnificance.  Yeah, to quote the Happy Bunny comic..."You made me throw up a little."  Seriously, how could she stand herself being that there are so many others that needed her help and yet....wait, wait, I'm getting ahead of myself.  We learn later on about the dual personality of this young girl (sorry, shan't explain it further as it would ruin the fun) and what it means to truly have power as well as what happens when it is wielded for good (or not).

The rest of my intro is fact rather than fiction...or rather facts about the fiction of which we are discussing.  The lack of communication from the kidnappers is bewildering, especially with the lapse of time that is involved...but the grand scheme of things unfolds over the course of the story.  Inspector Lestrade is in fact hot on the trail in his own way but whether or not that trail does indeed prove to be the full truth is another story altogether.  Than he have young Sherlock Holmes... 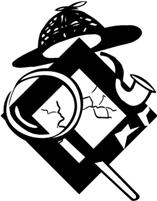 Ah yes...a character known the world over for his grand detective skills, choice of wardrobe, penchant for smoking pipes and yes, that love of violin music no matter how awf...I mean magically it is played.  The one, the only, Sherlock Holmes...only he's still in a bit of a growing stage.  We meet the detective as a young lad honing his detecting skills on the fly as he works his way through his academic studies as well as his understudy with the old apothecary, Sigerson Bell.  Now Bell is a character and a half let me tell you.  He may be up there in years and batty as a belfry at times, but the man knows his craft well...along with many other fascinating tidbits including several odd number of combat styles (I know, surprising, right?) on which he frequently instructs Master Holmes.  But I digress...

Young Holmes has suffered some set backs in life, none of which seem to haunt him more than the recent tragic passing of his mother (took place in book two from what I've gathered) of which he feels he is to blame....how so remains a mystery, but it weighs on him nonetheless.  The story marches on allowing us glimpses of the future detective we recognize most whilst sweeping the plot along toward the finale.

We meet several supporting characters along the way that capture Holmes' attention in matters of love (Irene Doyle...potentially at least), confusion (Irene Doyle, yet again), and competition (Malefactor...a street smart brute whose detective abilities would truly rival Holmes' own if not for his nose constantly being in dirty business), but he never side tracks to their interests for too long.  He has the desire to prove himself (albeit at times too much) coupled with a mind able to accomplish whatever he sets it to and with a little reigning in of emotions (*ahem* pride...yep, definitely pride) he just might realize the future he seeks.  Suffice it to say that character development was certainly not a problem in this book...

Now for me, the book started off slow...drawing my interest along like a new puppy on a leash. The author knew where he was leading me, the reader, but I couldn't see the sense of it all just yet. Case in point, aside from the kidnapping, there are a few others mysteries running tandem with the plot...at first, it's rather confusing as they are seemingly smaller in scale, but they end up being of great importance to solving the overall case.  The thing to remember here...no detail is too small.  By books end, I was thoroughly engrossed in all its happenings and waiting to see if the final reveal was anything along the lines of what I had imagined....it was and then some!  A few of the twists were a complete surprise, while others I had guessed but all in all they balanced each other out rather nicely.

Though this was the third book in a series of which I have not read the prior installments, I was still able to enjoy the story on the whole...but it does make one curious to know how exactly things arrived at the stage they are presented (in other words, they may just make it into my TBR pile one day). A great way to get acquainted with Sherlock Holmes before diving into the classic novels of literature past. Recommended read for all ages...and a work out for the mind to discover just who what when and where things occurred!

Review copy courtesy of LibraryThing's Early Reviewers and Sylvia at Tundra Books.  (THANKS!)  For more information on either of these great names in the world of reading, feel free to check out their sites through the links provided as well as the website dedicated to the series.  Twitter more your speed?  They both have feeds (1 and 2) there as well just waiting for you to follow along.

You are so cute. I love how you opened this review with a dark and stormy night :)

I loved the first book in this series - you've just reminded me that the second installment has been on my TBR for far too long!

I have to say I completely agree with Juju, loved the Intro! I've been seeing a lot of these sherlock holmes novels, not that its a bad thing at all. This one sounds quite good actually. I'd be interested to see how the others in the series fit in. Fantastic review as usual!

Bella Wong: Really? That's great! So you can pick up the second copy and I can look into the first. Any other feedback on it?

the1stdaughter: Thanks! ^_^ Yes, agreed on the influx of Sherlock Holmes...there's a YA one coming out in February (I think) that I'll be reading very soon. So far so good though!