Never More: Edgar and the Tattle-Tale Heart by Jennifer Adams

Can you believe it?  It's almost time to say "never more" to another year and HELLO 2015!  (Here's hoping it's better than this past year.)  Where does the time fly.  What's that?  Oh, my choice in wording for good-bye to 2014 gave you pause a moment didn't it?  Hehe.  Good eye.  There's a reason for that actually, a very good one too.  Consider it a mini introduction to today's featured title... 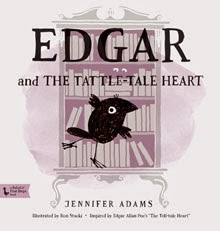 About the book....
The plucky, mischievous toddler Edgar the Raven is at it again in this spirited story with some important lessons. What will Edgar do when he accidentally breaks a statue sitting on a dresser? Will his sister, Lenore, tattle on him? Will Edgar tell his mother the truth? Inspired by Edgar Allan Poe’s “The Tell-Tale Heart,” little lit lovers will delight in this new adventure with characters illustrated in a most “poe-etic” way.

Quite true; quite true indeed.
This is a child's telling of the classic raven-esque story many have come to know and love.  The fanciful yet simple illustrations give it a flair that only a storybook retelling can, bringing the tale fully into the land of enjoyment for little ones as well as those that can appreciate Poe in its many forms.  Edgar, our feathered little friend, is quite captivating as he tries to hide the accident that's got his heart all a flutter.  Despite the fact that his sister is threatening to out him, he tries nonetheless to no avail.  His mother's arrival would normally spell impending doom, but she's got another lesson up her beak that you might not see coming...all the better for it too.

I must say, the BabyLit series has never led me wrong thus far, and this release in its First Step line is another winner.  Being a reader myself, I certainly appreciate Ms. Adams' efforts to bring the classics to the younger set with a life that mimics their origins yet resonates with the target audience.  The illustrations are never something to balk at either, often times making rather swell wall art.  (Have you seen the BabyLit classics?  Then you understand!)  The combination of the two allows parents to feel secure in adding these titles to their libraries, while assuring older readers that the next generation will get their chance to play with the classics too.

Recommended read for all ages...and species.  (^_^)  Signed review copy courtesy of author Jennifer Adams.  (THANKS!)  For more information on this title as well as her full body of works, be sure to stop by her official site.  This title was released earlier this year, so be on the lookout for it on a bookstore shelf or virtual retailer of your choosing.

Sweet. I have to check this out.