BOOK SPOTLIGHT: Thirst: Blood of My Blood by R.P. Channing

Hello everyone!
Welcome back to Satisfaction for Insatiable Readers.

Today, we're starting the week off with a spotlight on a Young Adult Paranormal title that's the first of what sounds like a potential series from a mysterious author unknown and unpublished until now.  Ladies and gents, grab a hold of your hats because this one might just blow them away if it reads as well as it tempts.  Please direct your attention below in three...two...one... 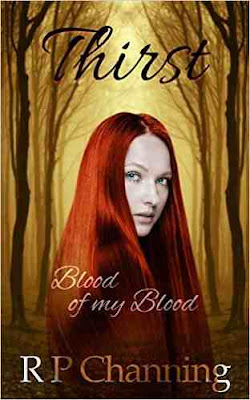 THIRST:  Blood of My Blood
by
R.P. Channing

About the book...
Vampires, Demons & Ghosts.
Welcome to STARKFIELD ACADEMY.


After a near fatal accident (and getting cheated on by her 'boyfriend'), and beating up the lead cheerleader (with whom the boyfriend cheated...), and being labeled as having 'issues' in her school because she, uhm, sees ghosts, Kira is left with two choices:

1. Continue her 'therapy' (where she's told the ghost is a hallucination and also gets her legs ogled too often...)
Or
2. Go to Starkfield Academy, a boarding school for "Crazies and Convicts" (as the social media sites call them.)

She chooses the latter...


Cory Rand has not had an easy life. His mother died in a car accident when he was twelve, and so did his mother's best friend...sort of. You see, Janice made a promise to take care of Cory just before she died, and so she lingers. Undead. A ghost that watches out for him.

Brought up in an abusive home, Cory quickly falls into a life of disreputable behavior. After his third offense (which was prompted by a girl, as usual - he has a weakness) he's left with two choices:

1. Be tried as an adult and share a cell with a guy named Bubba (he thinks...)
Or
2. Go to Starkfield Academy, which Cory is pretty sure is run by vampires. But, hey, at least he'll get an education.

He chooses the latter...

It's at Starkfield that Kira meets Cory Rand, a boy with an insatiable Rage who sees ghosts, too. As well as other things, other things from his past, things that confuse him, things like fire and witches and demons.

I mean, why can they see ghosts?  What's with the ominous things Cory can see?  Why doesn't someone put the hurt on the ogling therapy "professional"?  So many questions, and so many more JUST from the synopsis!  I can only imagine what lies between the pages due to my current reading schedule....but that doesn't mean YOU have to.  Just sayin'...


R P Channing started writing three years ago, but never published anything even after churning out over a million words of fiction. Thirst: Blood of my Blood is the first book he dared to publish. When asked why, he said, “Because I wouldn’t feel bad telling my mother about it...” When not hammering away (most literally) at his keyboard, he can be found buried in a book, reading anything from romance to horror to young adult to non-fiction to comedy. If it has words in it, I’ll take it.

Special thanks to author R.P. Channing for the chance to feature this title here today.  (THANKS!)  For more information on this release, the author, or future WIPs, be sure to click through the links provided above.  This title is available now in ebook format, so seek thee out a copy at your virtual retailers.

Great choice. I'd definitely have picked Starkfield Academy over having my legs ogled.