Today, we're kicking off the week with a blog tour featuring a new release Middle Grade title that is sure to please.  It's creepy, it's spooky, it's downright diabolical at times, and by book's end, you'll never look at a playground the same way again.  *gulp*  Ladies and gents, readers of all ages, gather your courage and prepare to let your imagination run wild as we take into today's book of choice.. 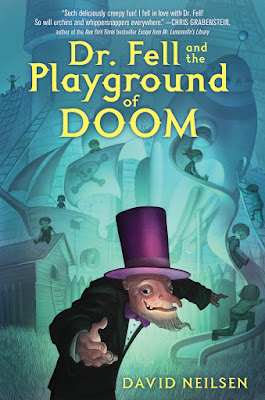 About the book....
When the mysterious Dr. Fell moves into the abandoned house that had once been the neighborhood kids’ hangout, he immediately builds a playground to win them over. But as the ever-changing play space becomes bigger and more elaborate, the children and their parents fall deeper under the doctor’s spell.

Only Jerry, Nancy, and Gail are immune to the lure of his extravagant wonderland. And they alone notice that when the injuries begin to pile up on the jungle gym, somehow Dr. Fell is able to heal each one with miraculous speed. Now the three children must find a way to uncover the doctor’s secret power without being captivated by his trickery.

Once upon a time, there was a quiet neighborhood, much like yours and mine.  Families dwelled, parents worked, schools taught, and children played.  It was all fun and games until one day...it wasn't.  When a mysterious figure moves into what was considered the town playhouse (an abandoned home sitting empty for many moons), it was thought odd.  When he approached our leading trio (Jerry, Nancy, and Gail) with his proper London-esque speech pattern, he was unusual.  When he built a playground that rivaled any currently in existence, he was thought saintly...after all, he was doing it for the children to replace the "playground" he had occupied.  When children started getting hurt or worse yet still showing up day after day to play on the magical, wondrous playground to top all playgrounds, it was...never even noticed except by our trio...and that was only the beginning of the weirdness.

It was a given fact, Dr. Fell was up to something, but exactly what was the hard-to-put-your-finger-on answer.  He had somehow managed to finagle his way into the minds and homes of the whole town to the extent that they were more curious about him than the subjects they were suppose to be teaching.  Mrs. Worth gave the ODDEST assignment ever...to spy on Dr Fell...just so they could learn more about him.  Problem was there was MUCH more to learn about him, but pretty much the whole town was already caught in his web...how were these three kiddos suppose to break his hold, let alone resist falling under his influence as well?  Good question indeed.  It's gonna take some ingenuity, some gumption, and the strength of their friendship to fight the evil that's truly in their midst; of course the help of someone that couldn't be bothered the whole story wouldn't hurt either.  *wink wink*

I gotta say, I was ensnared from start to finish.  The moment I laid eyes on the cover, I had to know more.  I mean you can't simply un-see the image that is Dr. Fell without some sort of explanation, and once you step inside his domain, whether it be the ever expanding playground or his home (decorated with SO MANY kitten pictures, Dolores Umbridge would be proud!), there's no turning back.  Character wise, he was pretty unforgettable, but so were those that would be our potential heroes.  Jerry is the underestimated little brother to Gail who seems to subconsciously default to Nancy in most situations.  Nancy is the friend that some fear, others respect, and still others avoid, but at heart, she's actually a pretty great kiddo.  Together, they are unstoppable...and their tenacity, their inability to accept defeat of themselves or each other may be the very thing that saves the day.

In the end, it was an invigorating read that kept you on your toes just waiting for the unknown to materialize and when it did, you wished it was something you could UN-know.  It reminds us of the power of friendship, to always keep our wits about us, and that not everything is what it might appear to at first be.  Sometimes, what's hiding beneath the surface is unicorns and glitter; other times, it's the dark underbelly of the universe.  Which is which can be hard to discern, but with good friends by your side, there's nothing you can't see through.  I do admit though that after reading this, I've a distinct desire to avoid any and all playgrounds of ginormous proportions from here on out...just sayin'.  *-*  A great read for the intended audience as well as those wracking up the years...you're never too old for a little fun, even on the creepy side of things. 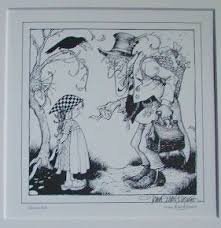 1) Alrighty then, I'm staying the obvious, but Dr. Fell is one strange cookie, yet very distinct. Where did your inspiration for him come from?

The idea for Dr. Fell and the book came from an illustration by the children’s illustrator Trina Schart Hyman. It had been hanging on the wall of my in-laws’ for years. It shows a man in a suit and top hat leering down at a little girl, who looks back at him suspiciously. The man has a large basket strapped to his back out of which are sticking various arms, legs, and heads of little children. It’s labelled “Dr. Fell” and Hyman drew it when asked to create an image from her favorite fable or fairy tale. Curious, I looked up Dr. Fell online and discovered the four-line poem written in 1680 which I’ve included at the beginning of my book.

I loved the picture, and right away all sorts of questions jumped into my head. Who is this guy? What is he doing? What happens when he comes to town? The story began to take form when I went about answering these questions.

2) Were you a fan of playgrounds when you were a child? What was your favorite thing to play on?

I still love playgrounds! My favorite elements have always been things I can climb all over. A few years ago, I led a team to build a new, awesome playground for one of our local elementary schools. It included what’s called a SpaceBall--a 16-foot tall sphere-like structure with countless ropes weaving through the middle. I still like to climb up through the ropes to the top and survey the rest of the playground and neighborhood.

3) The kids really have to band together if they've any hope of surviving this evil in their midst, turning tentative friendship into lifelong (however long that may be seeing what they're facing) bonds. Any childhood friends you’re still tight with so many years later? What cemented your friendship?

I have a good friend from high school with whom I’m still close. We clicked when we met while doing the school plays. Years later, after college, we spent six years working together on a comedy website called The Brunching Shuttlecocks. I’m not entirely sure what has made our friendship last, but I do know that neither of us has ever been angry or upset with the other ever.

4) Of all the genres in the literary world, WHY this one?

I love Middle Grade fiction, particularly MG horror, because the target readers are old enough to be relatively sophisticated, yet young enough that they retain the ability to feel a sense of wonder and awe. Writing for this genre, I’m free to stretch my imagination in ways I might not be capable of doing were I writing for another age group. 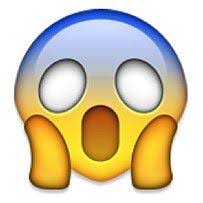 5) What's next on the writing agenda? Any tidbits or WIP you care to share?

Next up for me will be the publication of my second novel by Crown Books for Young Readers, tentatively entitled Beyond the Doors, next August. After that, I have three projects I am working on- a new quirky MG Horror novel, a new look at the first book I ever wrote, and then a possible sequel to Dr. Fell and the Playground of Doom.

Alright, time for a little quid pro quo.  I say FAVORITE and you say the first thing that pops into your mind.  Ready?  Favorite....

...color? Green
... season? Summer
... school subject? Theater
... place to write? The Audubon Room at the Warner Library in Tarrytown, NY
... author? Too many to name one. Some favorites include J.K. Rowling, Arthur C. Clarke, Jonathan Stroud, Issac Asimov, and Roald Dahl.
... book? Also too many to single one out. Basically, any book that can successfully transport me into a unique and well-fleshed-out world.

David Neilsen is a classically trained actor/storyteller, a journalist, and a theater/improvisation teacher for children and adults. During the Halloween season, David can be found telling spooky tales to audiences of all ages, or performing one of his one-man shows based on the stories of horror author H.P. Lovecraft. David lives in New York with his family. Dr. Fell and the Playground of Doom is his first novel. Visit him at neilsenparty.wordpress.com

Special thanks to author David Neilsen for sharing a bit about himself and his work, and the Penguin Random House team for the ARC for review as well as the chance to participate in this promotion.  (THANKS!)  For more information on this title, the author, or the publisher, feel free to click through the links provided above.  Be sure to check out the rest of the stops on THE TOUR for other amazing insights, tidbits, and whatnot just waiting to be shared, including yesterday's gem at Books Complete Me and tomorrow's stopover at Books, Movies, Reviews, Oh My!. This title celebrated its BOOK BIRTHDAY last week via Crown Books for Young Readers, an imprint of Penguin Random House, so be on the lookout for it on a bookstore shelf or virtual retailer of your choosing.

Loving the title and the cover even before I'd read the book blurb or your thoughts, I'm so glad that you bore out my feelings that here was an unforgettable read.

Oh so neat! I really like that cover, feels inviting. :) And great interview!

Lost in enjoyment this book goes over the top everyone should give this book a go. Kudos for the great review also