Lonesome Lies Before Us by Don Lee

HI there!
Welcome to another bookish day here at Satisfaction for Insatiable Readers.  I warned you.  This month and next are chock full of new and new-to-me titles that I'm going to share, share, share, so best leave that book buying ban behind because frankly, it's a lost cause.  Hey, I say that with the most love possible and the biggest hug because, really, we're all in the same boat here.  ^-^

Today, we're tackling a book that released earlier this month via W.W. Norton & Company, Inc.  It's a work of Fiction that tries to lend a melodious sound to an aging musicians life soundtrack with...somewhat "B" side results.  If you're a music fan or of a certain age, you'll get the reference; if not, I'm shaking my head at you right now and will forgive you Googling the term before continuing.  Anywho, let's get this show on stage to better discuss its bits and pieces, shall we?  Today's book of choice is... 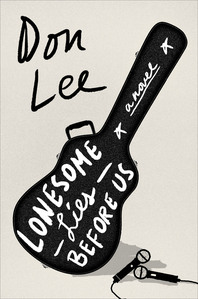 About the book...
A contemporary ballad of heartbreak, failure, and unquenchable longing, this novel presents Don Lee at his best.

Yadin Park is a talented alt-country musician whose career has floundered—doomed first by his homely looks and lack of stage presence and then by a progressive hearing disorder. His girlfriend, Jeanette Matsuda, might have been a professional photographer but for a devastating heartbreak in her teens. Now Yadin works for Jeanette’s father’s carpet-laying company in California while Jeanette cleans rooms at a local resort.

When Yadin’s former lover and musical partner, the celebrated Mallory Wicks, comes back into his life, all their most private hopes and desires are exposed, their secret fantasies about love and success put to the test.

Okay, here's the thing...
I had high hopes for this one, really and truly.  I'm all for rooting for the underdog taken down by circumstances (mostly) beyond his control, seemingly insurmountable challenges, and unexpected second chances.  What I'm also for is some sort of forward movement for those in the aforementioned positions within a written work, and that simply did not happen here.

Yadin is an aging musician looking to release a "goodbye" album despite the fact that he's been out of the music business for the last 20 something years.  He had and still has the talent, the writing skills, and the voice, just not the personality, and his hearing is fading fast.  That was the real kicker.  Beyond the band and industry that couldn't say yes to a shadowed figure belting it out on stage in near darkness, the rare disease that is stealing his ear was the nail in the proverbial coffin.  He accepted his lot in life and moved on to a blue collar career where he dates the daughter of the owner and called it even.  But that's the problem.  His acceptance of things is "great" but doesn't truly make for a story that I was sold on, heart and soul.  His relationship (if you can call it that) is more of convenience than passion, his job is definitely a job with no real feel for the furtherance that the owner intends to present him with, and his designs on this project felt half hearted.  Even when presented with the blast from his past, he was shaken up enough to accept some help shaping his work but not enough to actually CHANGE in some small or monumental way.

To all this I say....
KUDOS to him for sticking to his guns and not letting Mallory or anyone else tell him what to do.  FANTASTIC that he figures out what he needs in life to be happy even as he attempts to sabotage himself and simply settle.  WONDERFUL that he pursued risky avenues in order to try to see him dream to fruition. DARN IT ALL though that he was pretty much EXACTLY where he was when we first started out on this adventure.  Yes, he found himself a little more, and yes, he still had his songs, but where did that actually leave him and with what?  Exactly where he stated in the song and title of the book...with LONESOME being what LIES BEFORE US....

Recommended for Fiction fans that like a hint of music in their works and flock towards characters that never really seem to get their day in the sun, though they do figure out a thing or two about life along the way.

Don Lee is the author of the novels The Collective, Wrack and Ruin, and Country of Origin, and the story collection Yellow. He has received an American Book Award, the Asian/Pacific American Award for Literature, the Sue Kaufman Prize for First Fiction, the Edgar Award for Best First Novel, an O. Henry Award, and a Pushcart Prize. He teaches in the MFA program in creative writing at Temple University and splits his time between Philadelphia and Baltimore.

Special thanks to William at W.W. Norton & Company, Inc. for the copy for review.  (THANKS!) For more information on this title, the author, or the publisher, feel free to click through the links provided above.  This title celebrated its book birthday June 6th, 2017, so be on the lookout for it on a bookstore shelf or virtual retailer of your choosing.