The Fifteenth of June by Brent Jones

So, here we are.  It's the FIFTEENTH OF JUNE and we're ready to take a stroll through the pages of yet another book.  I wonder what we might discover today?  After all, the future is as of yet unwritten and the possibilities are endless, two things that our leading man will learn (eventually) in spades.  So, what are we reviewing today?  Why, it's simple...a book that shares its title with the very day that it is.  Ready or not, today's book of choice is on deck... 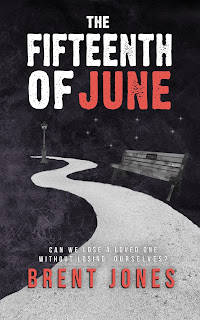 About the book...
Can we lose a loved one without losing ourselves?

Twenty-eight-year-old Drew Thomson is haunted by a troubled past. After struggling for years with alcoholism and antisocial behavior, he ends a stable relationship with his girlfriend and finds himself without a home, job, or purpose.

Just as he learns that his father is terminally ill, he meets a stranger who offers him a flicker of hope for a better future. But is he ready to bury the past?

Rich with dark humor and a keen insight into the human condition, this debut fictional release from author Brent Jones delves into life’s most pressing trials—destructive relationships, love, loss, and pursuing happiness.

Well now, that was... interesting.
Honestly, I can't say much in favor of Drew, though I get the gist of his story.  We begin with a father cut down by fate, that succumbs to his own demons (literally and figuratively), while attempting to guide his sons in the ways of life...not exactly a recipe for success.  One son turns out alright by most standards but is an utter disappointment to his old man (for reasons I won't disclose...you'll have to uncover them on your own), while the other he's as proud, well...as proud as he could be.  Yep, Drew is a spitting image of his father and we're not talking looks...but give it a few years, I bet he would become his double there too...and that was fine by him, to a point.  Once he finally hits the wall of what-has-become-of-my-life-and-why-is-my-father-the-way-he-is, he hits rock bottom....but as they say, the only way to go from there is up.  Though generally one to sit and let life pass him by, he's met a force that won't be pushed aside...and her name is Sierra.  She's a breath of fresh air in a drug and haze filled room....something he sorely needed in the worst way...but will it be enough for him to truly see the light?

Drew is nothing less than a seriously flawed character, but he also reminds us that redemption, whether to ourselves or in the eyes of others, is merely a series of choices away.  We need only choose the path left of self-destruction, and right of going-it-alone, because there's nothing wrong with asking for help.  Everyone needs a shoulder to lean on, an ear to bend, and heck, even a drinking buddy now and then, but it's in the moderation of those things (and avoidance of illegal substances) that our character is built.  Drew had enablers and stabilizers, but it took staring a version of death in the face for him to see that maybe things could be better without the drug induced hazes (surprised he could ever walk a straight), liver crushing binges (so much drinking!), and wallowing in self-pity.

Recommended read for adult readers due to language, content, and "extracurricular activities", but all in all, it carried the paper soul of our leading man to a brighter tomorrow...and who couldn't use a message of hope in today's day and age, even if it is whiskey flavored? 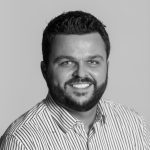 From bad checks to bathroom graffiti, Brent Jones has always been drawn to writing. He won a national creative writing competition at the age of fourteen, although he can’t recall what the story was about. Seventeen years later, he gave up his freelance career as a social media manager to pursue creative writing full-time. The Fifteenth of June is his debut novel.

Jones is working on his sophomore release from his home in Fort Erie, Canada. He’s a bearded cyclist, a mediocre guitarist, (mostly) vegetarian, the proud owner of two dogs with a God complex, and a devoted “Instagram husband.”

Special thanks to author Brent Jones for the copy for review.  (THANKS!)  For more information on this title, the author, and what he may be up to next, be sure to click through the links provided above.  This title is available now, so stop by your favorite online retailer to snag a copy today.

Thank you so much for featuring my debut novel. I appreciate it. You rock!