Today, we're joining Rachel's Random Resources for a stop along their current promotion featuring the third book in The Meonbridge Chronicles.  It's a work of Historical Fiction that from the sound of things, packs quite a punch...but you don't have to take my word for it.  I'm going to indulge our curious natures with a little bit of this (spotlight!) and a little bit of that (guest post!).  Ready, set, let's take a closer look at... 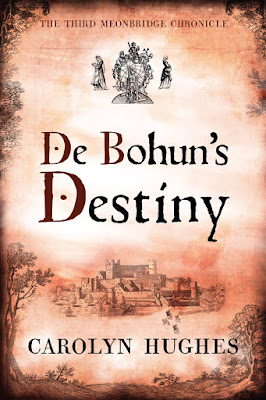 About the book...
How can you uphold a lie when you know it might destroy your family?

It is 1356, seven years since the Black Death ravaged Meonbridge, turning society upside down. Margaret, Lady de Bohun, is horrified when her husband lies about their grandson Dickon’s entitlement to inherit Meonbridge. She knows that Richard lied for the very best of reasons – to safeguard his family and its future – but lying is a sin. Yet she has no option but to maintain her husband’s falsehood...

Margaret’s companion, Matilda Fletcher, decides that the truth about young Dickon’s birth really must be told, if only to Thorkell Boune, the man she’s set her heart on winning. But Matilda’s “honesty” serves only her own interests, and she’s oblivious to the potential for disaster.

For Thorkell won’t scruple to pursue exactly what he wants, by whatever means are necessary, no matter who or what gets in his way…

If you enjoy well-researched, immersive historical fiction, with strong female characterisation and a real sense of authenticity, you’ll love De Bohun’s Destiny, the third Meonbridge Chronicle, set in the mid-14th century, in the turbulent and challenging years that followed the social devastation wrought by the Black Death. Discover for yourself if, in Meonbridge, it is Margaret or Matilda, right or might, truth or falsehood, that wins the day... 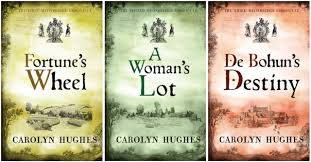 “It is June 1349. In the Hampshire village of Meonbridge, the worst plague in England’s history has wiped out half its population…”

So goes the blurb for my historical novel Fortune’s Wheel, the first in my series of Meonbridge Chronicles.

The Meonbridge Chronicles series is set in the 14th century, in the years following the devastation caused by what we call the Black Death, the terrible plague that killed up to half of all people in England (and Europe and Asia too). The disease lasted a matter of months in any one location although, overall, as it spread relentlessly across England, it persisted for the best part of two years.

It is hard to imagine what it must have been like – indeed, felt like – to see a third to a half of all your family, friends and neighbours killed within the space of a couple of months, or maybe even only a few weeks.

But it is what happened after the Black Death that is the underlying premise of Fortune’s Wheel. I was interested in what happened after it had passed on, leaving communities with fewer neighbours, empty houses, unfarmed land. Social change had already begun in rural manorial communities, with the feudal system of lords and peasants starting to break down, but the huge demographic shift that resulted from the simultaneous deaths of so very many people during the plague greatly accelerated that change.

I wondered how people coped, both emotionally and practically and, gradually, a story developed in my mind. It would portray the conflict that arose between the village people, who realised their new scarceness meant they had more power than before, and their masters, who were desperate to retain the status quo.

So the great upheaval in society brought about by the plague was the starting point for Fortune’s Wheel… And, having started there, all I had to do for subsequent Chronicles, each of which is set roughly two years following the previous one, was see what historical event might present Meonbridge with a particular challenge or, if there was nothing suitable, consider what social themes might offer appropriately demanding tribulations for my characters.

Although the main conflict in Fortune’s Wheel is between the men of Meonbridge, I wanted to reveal the story through the voices of the women, partly because women in history rarely have the chance to “speak”. Indeed, it was – and still is – the lives of the women that interested me most. And, in the second Chronicle, A Woman’s Lot, I focussed even more on those women’s lives. Following the plague, the changes in society brought relative (and I do mean relative!) improvements to the lives of women. The storyline again follows the tensions between the poorer in society and the richer, and the ups and downs of rural life, but it is also about marital discord, women’s (modest enough!) ambitions, and the widespread misogyny that women faced.

As I embarked upon Book 3, I realised that certain decisions I’d made for the first two novels had placed the inheritance of the Meonbridge estates in jeopardy! And, surely, given the somewhat lawless nature of the times, wouldn’t such jeopardy be an ideal – if potentially damaging – challenge to set my characters? The story thread in De Bohun’s Destiny is rather more focussed on the world of the de Bohuns, the “masters” of Meonbridge, than that of their tenants – or it is initially, at any rate. But it was predictable that the trouble the de Bohuns, in effect, brought upon themselves would eventually affect the community as a whole, so that everyone in Meonbridge would be in danger.

A Woman’s Lot and De Bohun’s Destiny do not draw on particular historical events of the 1350s but instead focus on appropriately troubling social themes. However, for Book 4, I am returning to historical events… Time has moved on to the 1360s and something very significant happened that will have another dramatic effect on the poor folk of Meonbridge. But more about that another time… 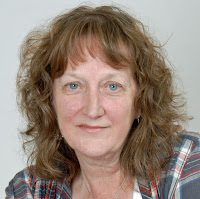 CAROLYN HUGHES was born in London, but has lived most of her life in Hampshire. After completing a degree in Classics and English, she started her working life as a computer programmer, in those days a very new profession. But it was when she discovered technical authoring that she knew she had found her vocation. She spent the next few decades writing and editing all sorts of material, some fascinating, some dull, for a wide variety of clients, including an international hotel group, medical instrument manufacturers and the government.

She has written creatively for most of her adult life, but it was not until her children grew up and flew the nest several years ago that writing historical fiction took centre stage in her life. She has a Master’s degree in Creative Writing from Portsmouth University and a PhD from the University of Southampton.

De Bohun’s Destiny is the third novel in the MEONBRIDGE CHRONICLES series. A fourth novel is under way.

Special thanks to Rachel at Rachel's Random Resources for the chance to bring this reveal to you. (THANKS!) For more information on this title, the author, this promotion, or those on the horizon, feel free to click through the links provided above.  Be sure to check out the rest of the tour as it makes its way through the blogosphere...