Hi there!
Welcome back to a NEW YEAR here at Satisfaction for Insatiable Readers.

So, did you have a great time last night?  Party the night away?  Say goodbye to 2019 and welcome 2020 with open arms?  Here's hoping because it's here whether you're ready or not and it can only go THAT much better if you start the year off on the right foot.  Speaking of which...

Seeing as we're all book lovers here,  I have a FABULOUS opportunity for you to keep your New Year's Resolutions this year.  What's that?  You didn't make one?  Oh, well that's easy enough to fix.  I'll make it easy, BOOKISH, and totally worth your wile.  Sound good?  GOOD...because it gets better.﻿  Today, I bring to you news of the upcoming Candlewick Press catalog for 2020.  It's filled to the brim with Middle Grade Fiction you won't want to miss...and if I have my say in it, TWO of you won't be missing it for certain.  That's right.  It's...

...and the prize is double your pleasure, double your fun because you have a chance to win (1) of TWO DIFFERENT themed prize packs from the folks at Candlewick Press!  Over on Instagram, I'm featuring the "A Light in the Dark" prize pack with three titles that totally get what being that for someone else means...

(for more details on that one, click on over to my feed and enter!)

...but over here, you've got your shot at winning "The Heroine Within" prize pack featuring three books starring ladies of courage, candor, and determination.  Let's take a closer look, shall we? 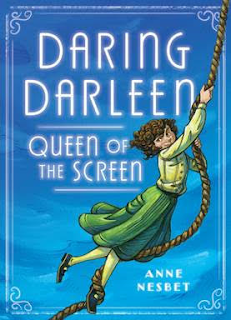 When a publicity stunt goes terribly wrong, twelve-year-old Darleen Darling, star of the silent film era, must defeat villains both on screen and off in this edge-of-your-seat adventure.
It’s 1914, and Darleen Darling’s film adventures collide with reality when a fake kidnapping set up by her studio becomes all too real. Suddenly Darleen finds herself in the hands of dastardly criminals who have just nabbed Miss Victorine Berryman, the poor-little-rich-girl heiress of one of America’s largest fortunes. Soon real life starts to seem like a bona fide adventure serial, complete with dramatic escapes, murderous plots, and a runaway air balloon. Will Darleen and Victorine be able to engineer their own happily-ever-after, or will the villains be victorious? 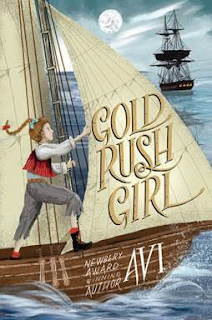 Newbery Medalist Avi brings us mud-caked, tent-filled San Francisco in 1848 with a willful heroine who goes on an unintended — and perilous — adventure to save her brother.
Victoria Blaisdell longs for independence and adventure, and she yearns to accompany her father as he sails west in search of real gold! But it is 1848, and Tory isn’t even allowed to go to school, much less travel all the way from Rhode Island to California. Determined to take control of her own destiny, Tory stows away on the ship. Though San Francisco is frenzied and full of wild and dangerous men, Tory finds freedom and friendship there. Until one day, when Father is in the gold fields, her younger brother, Jacob, is kidnapped. And so Tory is spurred on a treacherous search for him in Rotten Row, a part of San Francisco Bay crowded with hundreds of abandoned ships. Beloved storyteller Avi is at the top of his form as he ushers us back to an extraordinary time of hope and risk, brought to life by a heroine readers will cheer for. Spot-on details and high suspense make this a vivid, absorbing historical adventure. 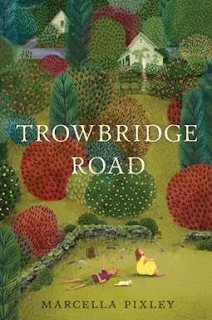 In a stunning novel set in the 1980s, a girl with heavy secrets awakens her sleepy street to the complexities of love and courage.
It’s the summer of ’83 on Trowbridge Road, and June Bug Jordan is hungry. Months after her father’s death from complications from AIDS, her mother has stopped cooking and refuses to leave the house, instead locking herself away to scour at the germs she believes are everywhere. June Bug threatens this precarious existence by going out into the neighborhood, gradually befriending Ziggy, an imaginative boy who is living with his Nana Jean after experiencing troubles of his own. But as June Bug’s connection to the world grows stronger, her mother’s grows more distant — even dangerous — pushing June Bug to choose between truth and healing and the only home she has ever known.
Trowbridge Road paints an unwavering portrait of a girl and her family touched by mental illness and grief. Set in the Boston suburbs during the first years of the AIDS epidemic, the novel explores how a seemingly perfect neighborhood can contain restless ghosts and unspoken secrets. Written with deep insight and subtle lyricism by acclaimed author Marcella Pixley, Trowbridge Road demonstrates our power to rescue one another even when our hearts are broken.

FILL OUT THE RAFFLECOPTER FORM BELOW
FOR YOUR CHANCE TO WIN THIS PRIZE PACK!

** OPEN TO US/CANADA residents only; no PO BOXES please. Entries will be accepted through 01/31/20. The winners will be drawn, contacted, and given 48 hours to respond with their full name and mailing information (Canada friends, I've been told the publisher will need a phone number as well!) to be passed to the publisher for prize send out. If no response is received in the given time frame, a new winner will be chosen.

Special thanks to Raquel with Candlewick Press for the chance to bring these titles to you as well as the prize packs for giveaway.  (THANKS!)  For more information on these titles, click through the links provided above and be sure to check out the second part of this giveaway for your chance to win the "A Light in the Dark" prize pack over on my Instagram!