Benjamin Pratt & the Keepers of the School: We the Children by Andrew Clements

Hi everyone!
Glad you could make it!  Yesterday we had a blog tour stop by, loads of fun as always, and today we have a post featuring a newly released title sure to please the younger crowd and the young at heart (I love these types of books...adventurous, fun, and light-hearted...)!  Let's set sail for adventure in the newest release from a well know author.  Today's book of choice is.... 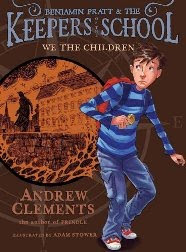 Benjamin Pratt & the Keepers of the School:
We the Children
by
Andrew Clements

Benjamin Pratt is your average kid.  Dreaming big, studying hard...all the things your average child should be up to, or at least he was until the day that he became a keeper of the school.  The school janitor Mr. Keane had taken a fall, injuring his leg and Ben being a noble lad stops to help him in the school hall.  As he is doing so, Mr. Keane imparts a rather peculiar story about the children being the true keepers of the school and that it should not fall into enemy hands...at the end of his tale he leaves Ben with a gold coin passed down from custodian to custodian all the way back to the time of Captain Oakes himself (founder of the school).  Stamped within it's golden borders is a message telling how to seek assistance should the time come that the school needs to be defended.  That time has come ironically enough since the school is about to be torn down for a new developer.  But if the deal is already made what could possibly be uncovered that would stop progress from taking this landmark and home of budding learners?  It would seem that old Oakes had something up his sleeve when this school was founded and it is up to Ben to uncover his secrets.  He won't be alone in his journey though...his school mate Jill (kind of like Hermione is to Harry) is just as interested in this mysterious quest and just as eager to find out what lies at the heart of the matter.  Can two children really make the difference against land developers, multi-million dollar contracts and spies?  (Yep, SPIES!)

I really enjoyed this book!  It was short and sweet and definitely a set up for future books to come as the children barely have time to uncover the secret message tapped in copper let alone explore any of the five levels of defense methods told of.  I found it rather interesting that the author placed the care of the school in the hands of the students.  Grant it, it wasn't by choice since Lyman (the new janitor) is more than a bit shadey, but it was definitely an unexpected story choice that worked quite well overall.  After all, the hallowed halls of learning were meant for students of all ages, why shouldn't the younger generation value these institutions as well (nice message there from the author).

Aside from a love of learning and treasuring our schools, there is also a bit of knowledge imparted in this fun tale in regards to sailing.  Ben is a member of the Bluewater Sailing Club and he has an upcoming race against a fellow classmate.  While we visit with him during the course, you get to learn what different parts of the boat come into play, as well as different calls and their meaning.  Such as "Starboard", means they are requesting the right of way, or "jibe-ho", which is a warning shouted when steering off the wind so others know to duck.  Since I am not in any shape or form a sailor, I found this inclusion rather interesting and definitely beneficial for both myself and the characters when working through the mysteries in the book.  After all, this is a school built right on the harbor by an old sea captain...there are bound to be more than a few surprises of the nautical sort waiting for them.


Last but not least, I really enjoyed the strength of character the author instilled within young Ben.  He sticks up for himself and his friends, can be trusted, counted on, and called upon in times of need, and keeps his moral compass ever pointing North.  He deals with his Mom and Dad's separation by commuting between homes, yet trying to keep both parents happy and not make the situation worse.  During the boat race when a fellow competitor is in trouble, he does not stop for a second to wonder if he should help them, he simply does.  He's a young man of action, and yet he knows when to seek out additional help...that help often times coming in the form of young Jill.  She too is an admirable girl as she takes him at his word when necessary, choosing to believe her friend rather than blow off his story as crazy talk.  Afterwards, she'll allow her natural curiousity to take over and back up both of their claims with cold hard facts...definitely handy when trying to bring down those that would rather see you gone. 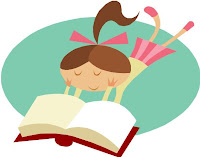 ARC for review received courtesy of Lucille at Simon & Schuster.  (THANKS!)  Be sure to check out their site, or follow along on Twitter for more fun!  To unlock the series, you may want to check out the official website too!

I think I need to grab this for my nephew :)

Wow. I'm off to Amazon to add it to my wish list before I forget! (this is the second time I've done this today, btw) :-)

How strange is that, quite eerie in fact - I went to school with a Ben Platt, his mother taught PE and was known as Platt the mat as she favoured gymnastics done on a, you guesses it, mat. A must have for niece #2 (not to mention me).

Juju: It was definitely a fun book...and start of a series!

Shannon O'Donnell: Happy to help add to your wish list. ^_^

Petty Witter: Wow, that is quite the coincidence....spooky. Love the nickname, I wonder if she did as much? Hope your niece (and you as well) enjoy the book! =0)