Emily For Real by Sylvia Gunnery

Hi there!
Welcome back to Satisfaction for Insatiable Readers...the place to be when the need to read strikes and you're looking for a few good books.  (Speaking of which, don't forget to check out the right hand side bar for your chance to win a few titles currently up for grabs!) Take today's for example...

We have a Young Adult choice that deals with real life in a REAL way.  Ups, downs, and everything inbetween are housed within the pages of this short read and they come together to an ending that is almost anything but.  Allow me to introduce you to today's book of choice... 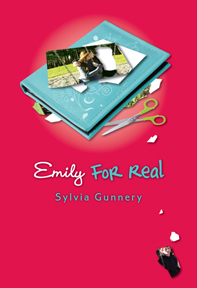 Emily for Real
by
Sylvia Gunnery


Seventeen-year-old Emily’s world crumbles when her boy friend dumps her, and when she thinks her life can’t possibly get any worse, a series of secrets are revealed that threaten to tear her beloved family apart. Emily’s heart has been broken into a hundred pieces and she feels like there is no one to turn to, until an unexpected friendship blossoms with a troubled classmate named Leo. Sometimes moody but always supportive, Leo is Emily’s rock in an ocean of confusion and disbelief.
But Leo doesn’t have an easy life either. He struggles to be both mother and father to his little sister while his mom battles her alcohol addiction. His deadbeat dad darts in and out of the picture, and Leo would rather he stay away, permanently. The two friends lean on each other, and in the end discover the inner strength to face whatever life throws at them.


It all starts with a death in the family...a simple enough start it would seem and yet the tragedy itself it not what has Emily all torn up on the inside.  Nope.  In typical teenage fashion, it's the ironically timed break up from her long distance boyfriend (over the phone no less!) that has her heart in shambles.  You can't truly blame her, after all she wasn't really close to her grandfather and yet with all that's about to be uncovered, apparently, NO ONE really was.

The secrets begin to reveal themselves at the funeral with an unexpected (and at the time, unknown) guest and continue through books end when more than one person's whole world will be shaken not stirred.  How does Emily deal with the news?  Well, the immediate revelation has more to do with her parents than with her but with the emotional hurricane she's rolling through at the moment, that's probably best.  She decides to take the "lets-try-to-focus-on-someone-elses-problems-not-mine" route and in turn meets the new guy in school that seems to be a walking add for anger management.  Don't worry, he's not completely self destructive or about to turn his blossoming friendship with Emily into a Jerry Springer episode but he does have his issues as well as a few good reasons for their existence.  I'm not excusing his acting out (including a stolen/misplaced incident with his Dad's truck) but it certainly is understandable.  The yin and yang of these two seemingly polar opposites aids in them both rectifying their situations to the best of their abilities but if you're looking for a neat and clean tidy type of ending, think again.

This is not the story of what once was, what could have been and what will be with wishes becoming horses and the less fortunate riding.  This is a story of the crud that life can deal us and how our story is not written by its appearance but by our reaction to it.  The author does a good job of getting us inside the heads of Emily and Leo....even Emma and Dana whom me meet more in-depth later on and have their own stories to share.  If we choose to breakdown and hide away from the world, then our downfall becomes our ending.  If we choose to accept the change, muddle through our feelings and move on, then our recovery and new found stronger self will be our victory song.  Emily is dealt a rather LARGE load of...problems.  Some are typical teenage land stuff, others not so much...and one still felt a little "added" much like the straw on the camel's back in lieu of actually being needed, but the way she finds her way back, the way she picks up the pieces to put things not back together but to form a new masterpiece are real.  The decisions are filled with drama.  Emotions are spent time and time again yet still ready for another go round. With the somewhat help of her new friend, she comes to terms with what happened and what's happening, realizing that the grass is not greener on the other side, just simply another shade of mixed up and confused.

Recommended read for YA fans of all ages though I think those literally living in the moment of their later teens will be spoken to most clearly.  At times, it might even take a page out of your own diary....but that's okay, life happens in reality and between the pages.  Review copy courtesy of Erin at Pajama Press.  (THANKS!)  For more information on this title as well as their complete catalog, be sure to visit them online, catch up on their blog, pin them on Pinterest, like them on Facebook, or follow along on Twitter.  This title is distributed by Orca Book Publishers and should be available now on a bookstore shelf near you.

Sounds like a winner in that most of us will relate to Emily. I mean how many of us haven't had our heart broken at some time or other? How many of us have at some point felt we have no-one to turn to? Great review, thanks for recommending this.