BOOK KINS: It's all relative...

Hi guys and gals!
Welcome back to another edition of Satisfaction for Insatiable Readers.

Okay, so this is a post that took some time to create not so much in content (though that did as well), but in TITLE.  I toyed with SO MANY OPTIONS, some of which I liked (Book-to-Book) and some of which I discarded before I could even record the name.  In the end, I went with 'Book Kins' because it was cute, it was short, and in essence, each of the titles featured today reminded me of the next, and the next, and so on, until I was on a reading journey where everything seemed to relate to the other in some fashion. Sound good?  Great!  Feel free to create your own post with the title/theme...

Today's selections are a collection of Children's Fiction, Middle Grade, First Reader, and Picture Book wonders that will tantalize little ones, entice the slightly older, and still capture the imagination of those well beyond the target range.  Ready my bookish friends?  Here we go!  Our initial starting point is...

This is the tale of second grade class that is about to bite off more than they can chew...or rather their class PET is.  Yes, indeed, for you see that cutie patootie little fur ball on the front cover?  That's Fluffity.  That's the little adorableness that will enchant upon her arrival to Mr. Drake's class.  That's the tiny harmless critter that they all want to hold, and pet, and touch, and...have been warned very strictly to LOOK ONLY.  But why?  Wonder of wonders, the day Mr. Drake is late to class, this group of kiddos learn EXACTLY why it's best to listen to teacher.  *-*

I'm telling you, if the cover doesn't invite you in with Fluffity's mesmerizing eyes, the tiny subtitle there should....'A Mighty Bite-y Class Pet".  It's a hoot and a half story wise, and the illustrations work ever so much in its favor, it's not even funny...but it is!  It's HI-larious and charming all while teaching kids a valuable lesson on active listening, and pet selection/care.  Now, after reading this little wonder, I was still thinking about SCHOOL, thus I picked up.... 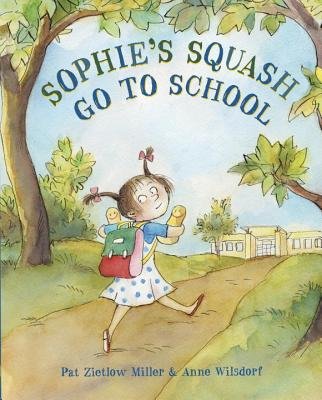 Sophie is off to SCHOOL and with her are her two best friends, Bonnie and Baxter...who are squash.  Umm...someone needs to tell her that vegetables (excuse me, fruits...as Steven so informed us) are best on your plate, not on a play date, but I won't be that person because to squash (pardon the pun) imagination is a terrible thing.  Seriously though, Sophie is worried about making human FRIENDS despite the reassurance of both her mother and father.  She just doesn't seem to think it's possible for someone to like what she likes and do what she does without ruining everything and the fact that the kids don't understand her love for her inanimate buds doesn't lend a helping hand in the least.  Good thing Steven is a persistent little fella and doesn't give up easily.

As much as I enjoyed seeing Sophie open up to the possibility of friendship outside of the grown variety, it was really Steven and his little stuffed frog that stole my heart.  When the misunderstanding of epic proportions happened in the the classroom putting an end to her artistic rendering, his gesture was so sweet, and ultimately melted the doubts that our little Sophie had from the start.  Good form little man, good form.  Now, this book left me with a smile at the FRIENDSHIP that was discovered and ultimately led me to my next pick.... 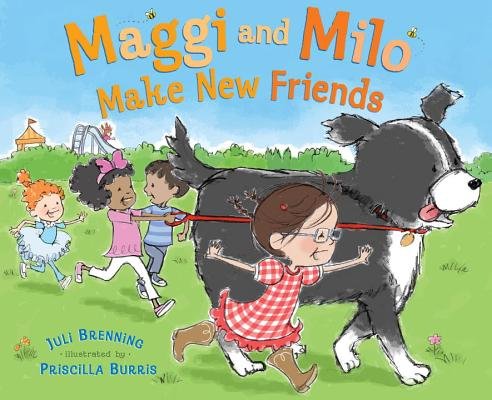 This book had two connections, the obvious FRIENDSHIP but also our leading lady.  Sophie's spunk and imagination dearly reminded me of little Maggi in this story, not to mention her fun little hairdo.  In this story, we've a little girl and her best friend Milo, a wonderfully large, fluffy, MAMMAL OF ALL MAMMALS (aka dog).  They've a wonderful bond and the good times to be had are endless, but Maggi's Mom wants her to get a little playtime in outside the house with other kids her age at the local playground.  Maggi's not fond of the idea but agrees, so long as Milo can go too.  Problem is the park doesn't allow dogs...the horror!  Maggi wants no part of it, if he can't go, she won't either...but Mom intervenes giving a solution to the problem, thus removing the obstacles Maggi was placing in her own way, and wouldn't you know it?  In the end, Mom was right...

First of all, those illustrations!  I adored little Maggi with her gingham getup and cowboy boots, so cute, and Milo I simply wanted to pet right off the page.  I'm a sucker for cute pups, big and small...what can I say?  It was great to see her so devoted to her dog and he to her, but also a joy to see her discovering friends of the two-legged variety that she could engage with as well.  It was wonderfully creative (and a tad sneaky) how Maggie was able to work Milo back into the fun and games, and that scavenger hunt angle was too much!  Not only was she able to score more alone time with Milo, but she also showed her new friends just how far a little imagination can take you.  I was delighted to also receive a scavenger hunt invitation (of sorts) to create something from my own backyard, and while not nearly as ingenious as Maggi's creation, I think it came out kinda nifty in the end, though I won't be sharing the work here.  *ahem*  Let's just say it involved a few sticks that kinda stood for half a second with leaves and grass precariously placed around them like a tepee, and a flower or two to adorn the doorway.  ^-^   Now, this story left me in the frame of mind to think about PETS, which led me to... 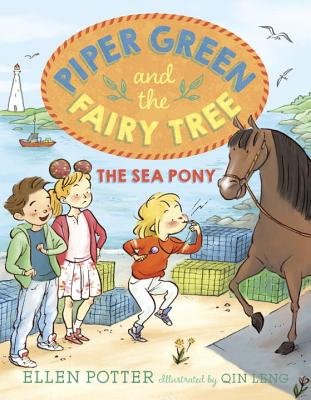 Piper Green is back and as imaginative as ever.  She still rides the lobster boat to school, the Fairy Tree is still stands proudly in her front yard, and she's still trying to one up Allie O'Malley.  Kids, what can you do?  *shakes head*  Anywho, in Piper's latest treasure switcheroo with the Fairy Tree, she's gotten herself a bright, shiny, interesting...whistle?  Yes, a whistle...but not just any whistle.  This is a bosun's whistle.  Not sure what that is?  You'll learn soon enough, and though seemingly NOT what Piper wished for when she set her trade in motion, it will come in handy in the end in finding both the PET (of a sort) that she wanted as well as something thought long lost.

The beauty of this series is held in both the story and drawings.  The simple pencil renditions are detailed enough to capture the mood of the moment, but not so much that young readers just taking flight will be completely distracted from the tale.  The story is interesting enough to pull even the most timid of readers along for the boat ride and with characters as spunky as our little Piper, easily coming back for more.  I also enjoy the pinch of educational material inserted in the tale, such as the bosun's whistle - history and use - because it allows for further expanding of young minds while giving them an entry point to investigate the nautical aspects of the story further.  Another win for Piper Green and her adorable (and smart!) "sea pony".  Speaking of SEA, that brought to mind our next title... Paddington and the Browns are off for a trip to the SEA shore!  Having never been to the beach, Paddington packs everything, and I so mean EVERYTHING, a bear could possibly need for such an excursion.  A float upon the waves, and a sandcastle competition later, and our little Paddington is pooped!  He takes a few moments respite in his sandy creation...only when he is rudely awakened by an unexpected splash, he's not quite on the shore anymore.  *-*  Uh-oh...it seems the tide has come in and washed our little bear out to sea!  Will Paddington make it back to the beach safe and sound?  Will the Browns have to rescue him from the salty depths?  Will I stop posing questions and let you and yours get to reading the book?  Yes!

Paddington is a timeless character which makes his adventures one and the same.  Though this trip through the big waters is much shorter than his original journey, it's adventure filled and ADORABLE nonetheless.  If you haven't discovered the joys of this little blue-coat-red-hat-wearing bear, it's high tide...I mean time...you start.  While we were swept out to SEA with this read, I was still focused by book's end on the BEAR, which led me to....

Speaking of timeless characters, the Berenstain BEARS are definitely another occupant of that category.  Mama, Papa, Brother, Sister, and Honey Bear are all here and getting ready for the first day of school.  You'd think it'd be all fun and games; new supplies to shop for, clothes to pick out, and friends to meet up with again.  Alas...the trepidation for that FIRST DAY is what's spoiling all their fun.  Though Brother and Sister Bear know what to expect despite their own fears of a particular subject or two, Honey Bear is just starting her "academic career" and the jitters are seriously getting to her.  With a little encouragement from Mama and Papa plus a prayer for guidance and strength from above, the siblings discover that everything will be alright in the end.  They learn to lean on each others strengths to undermine their perceived weaknesses and to leave the bigger things to the Big Man upstairs.

I grew up with these BEARS in their non-secular based classics, and still find the faith-tinged series most enjoyable.  Who couldn't use a reminder at any age that they are never truly alone with their struggles?  Who doesn't need someone to lean on in times of need?  Who couldn't use a source of strength when their own seems to be failing?  These stories use everyday instances to relate to the kiddos while allowing the secular ideals to work their own magic, bringing the lessons of the Bible home for all ages.


So, you see fair readers, our first BOOK KINS has come to an end.  Here's hoping you found some amazing new titles to add to your Summer Reading and beyond!  My thanks to the publishers and publicists that work day in day out to help authors and illustrators get their stories in the hands of readers worldwide.  Review copy thanks to the teams at HarperCollins, Penguin Random House, Schwartz & Wade, Zonderkidz, and Abrams Books for Young Readers.  For more information on the titles covered here today, the authors, illustrators, or publishers, please feel free to click through the links provided above.  Most of these titles are available now (except those noted otherwise), so be on the lookout for them on a bookstore shelf or virtual retailer of your choosing.

What wonderful and delightful books.