Today, we're helping to spread the PRE BOOK BIRTHDAY BUZZ for the forthcoming release from author John Herrick.  If the name sounds familiar, it should...I've read/reviewed several of his other works and have yet to be disappointed.  This time around, it's a Romantic Comedy that will have you not only in stitches, but by the heart strings as you hold your breath wondering whether life will imitate art and if love of a muse can turn into something more.  Ready or not, make room on your wish list for today's book of choice... 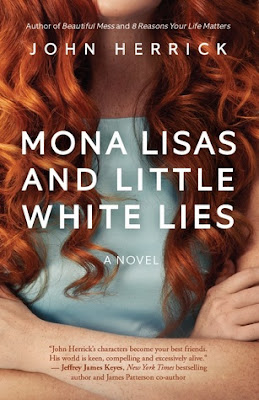 About the book...
She’s America’s hottest new celebrity. But her identity remains a secret.

Lily Machara is a wisecracking auto mechanic. She’s never cared for glitz or drama. But when Ryder Flynn, a rising star in the world of commercial art, adopts Lily as his muse after a random sighting, Lily discovers herself painted into his hot new pieces … and becomes America’s newest — anonymous — celebrity.

The only problem: The woman Ryder imagines isn’t the true Lily.

Now, as Lily and Ryder give in to mutual curiosity and a budding romance, Lily’s life — secrets and all — fall victim to a pop culture with one question on its mind: Who is the woman in Ryder Flynn’s art?

I started this one in the middle of the night, just as I was about to tuck in from a long day at work, and I found myself...rather addicted.  From my previous experience with the author's work, I was already high on my anticipation levels for the story to come, and that instant draw to the story was OH SO promising.  Did it live up to my hopes?  You'll see...

I really enjoyed the opening chapters, and meeting the leads for the first time.  It was very one-sided, after all...you didn't REALLY know what she would hold on to come morning...but still so magical.  I loved how he saw such beauty through her pain.  I adored the pedestal he placed her on, and yet it wasn't set at an unattainable height...merely a fantasy (of sorts) that needed a little more explanation, or perhaps imagination.  When Lily discovered herself EVERYWHERE, I could only imagine how disconcerting that had to feel, but the emotions it stirred were enough to set in motion events that may not otherwise have come to pass, allowing her to discover not just the artist behind the art, but the beauty of her own character in ways she hadn't previously viewed herself.  Oh and hats off for the nonconventional life, or rather career choice the author gave her.  Hey, not everyone is made for an office!

Now, I will admit to being a bit concerned for our artistically rendered Mona Lisa as she reached a crossroads or two and things could have gone so many ways my head was spinning! Regardless of the outcome, I was content in the knowledge of one thing...it was gonna be one heck of a trip.  With his high level emotions and her feistiness, there were bound to be some fireworks...whether they were beauty personified or burning something to cinders remained to be seen.  The only issue I had was the lynchpin that seemed ready to potentially tear their whole world apart.  I get it, it was an untruth, but as a reader, it only registered on a minor level.  I had to really place myself in the story and view it through their eyes to feel its full force.  I mean, if this was made to seem this way, what else may be hidden in darker corners?

Like any work of artistry, in the end, it had its ups and downs, but its true beauty shined through. Fans of the author's previous works will not be disappointed (like moi!), nor will those just being inducted into his fan club (like some of you that haven't had the pleasure previously).  This is definitely one novel that is its own unique work of art.

A self-described "broken Christian," John Herrick battled depression since childhood. In that context, however, he developed intuition for themes of spiritual journey and the human heart.

Herrick graduated from the University of Missouri—Columbia. Rejected for every writing position he sought, he turned to information technology and fund development, where he cultivated analytical and project management skills that helped shape his novel-writing process. He seized unpaid opportunities writing radio commercial copy and ghostwriting for two nationally syndicated radio preachers.

The Akron Beacon Journal hailed Herrick's From the Dead as "a solid debut novel." Published in 2010, it became an Amazon bestseller. The Landing, a semifinalist in the inaugural Amazon Breakthrough Novel Award contest, followed.

In Between These Walls, readers returned to Hudson, Ohio, to which he introduced them in From the Dead. And in Beautiful Mess, a 2017 Best Book Awards winner, readers found a romantic comedy with a twist on screen legend Marilyn Monroe.

Herrick admits his journey felt disconnected. "It was a challenge but also a growth process," he acknowledges. "But in retrospect, I can see God's fingerprints all over it."

Special thanks to author John Herrick for the copy for review.  (THANKS!)  For more information on this title, the author, or his other works, feel free to click through the links provided above.  This title is set to release March 19th, 2019 via Segue Blue, so mark your calendar or preorder your copy today!

Great review! This is a new one for me and it sounds unique. I love it when you start a book and it pleasantly surprises you.