RRR presents... STARTING OVER AT THE VINEYARD IN ALSACE by Julie Stock - EXCERPT!

Hello, hello!
Welcome back to Satisfaction for Insatiable Readers.

Today, Rachel's Random Resources is back with another great tour.  The title in the spotlight is a story filled with new beginnings set in beautiful wine country and ready to whisk your heart away, if only you'll let it.  Ready or not, here comes today's blog tour guest and your potential must read addition... 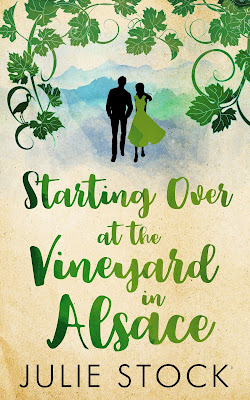 Starting Over at the Vineyard in Alsace
by
Julie Stock

About the book...
It’s springtime at The Vineyard in Alsace, a new season and a new beginning

After being abandoned by her partner when she falls pregnant, Lottie Schell goes home to live on The Vineyard in Alsace, where she has started a new relationship with the estate’s winemaker, Thierry. Now about to give birth, Lottie’s determined to raise her child and to provide for them both on her own without having to depend on anyone else.

Thierry Bernard is still dealing with his grief and guilt following the death of his wife two years earlier, for which he blames himself. When he meets Lottie, the instant attraction he feels towards her gives him hope that he can move on from the tragedy of his past, as long as he can tell Lottie the truth of what happened.

When circumstances force Lottie and Thierry closer together, they both find it hard to compromise – she’s proudly independent and he’s fiercely protective – and they’re both wary about trusting someone new with their heart.

Can Lottie and Thierry take a chance on each other, move on from their pasts and start over?
Escape to The Vineyard in Alsace once again with this romantic read set in the heart of Alsace’s wine country.

This is the very beginning of the story when Lottie, the main female character is pondering the fact that she is soon going to give birth and how much her life has changed since she found out she was pregnant.

Lottie
Lottie Schell gazed out of her bedroom window at the dormant vineyard estate of Domaine des Montagnes on the hillside in the distance. At last winter was coming to an end and soon the vines would be coming to life again as the new season got underway. The vineyard had been in the Le Roy family for generations and was now run by Didier, together with Lottie’s sister, Fran. Lottie smiled as she thought how close she and her sister had become since she’d found out she was unexpectedly pregnant. When she’d had to return home to Alsace from her travels, Fran had taken her in.
Lottie glanced down at her stomach in the mirror, still unable to believe it had grown quite this big, even though she’d had eight months to get used to it. She turned from side to side, amazed at how taut and shiny her skin was. Her baby was due in about four weeks’ time, according to the dates her doctor and midwife had given her, and she was impatient to meet him or her after all these months. At the same time, the thought of moving the baby from the relative safety of her body to face the dangers of the outside world scared her half to death.
As if to confirm agreement with her on that thought, the baby kicked, and Lottie touched her hand gently to the spot.
‘I know you’re ready to come out, little one. You’re in the driving seat on that, I’m afraid.’
She slipped her clothes on before negotiating the twisty staircase of Sylvie’s old cottage and emerging into the living room. Sylvie Le Roy was tucking away the knitting she’d been busy with for the past few months since Lottie had moved in with her. Lottie kept up the pretence of not knowing what she was up to so it would be a surprise when Sylvie finally gave her the gift she’d been making. This was sure to be at the upcoming baby shower, which the whole village seemed to have been invited to, despite Lottie’s request not to make a fuss.
‘Bonjour, Lottie. Ça va ce matin?’
‘Yes, I’m fine, thanks. How are you today?’
Didier’s mum was only just fully straightening up after pushing herself gently out of her chair, and Lottie caught the grimace that passed across her face as she did so. Not for the first time, she worried about the added pressure she was bringing to Sylvie’s life by staying with her.
‘I’m absolutely fine. Now, what can I get you for breakfast, before you go to the doctor for your check-up? You need to keep your strength up.’
Lottie willed herself not to roll her eyes at the older woman’s mantra. Sylvie was always quick to deflect the conversation away from her aches and pains in favour of fussing over Lottie’s wellbeing and, by association, that of the baby.
‘Fran will be here to take me in a minute, Sylvie, and we’re going to get breakfast on the way, I promise.’ She didn’t want to impose on Sylvie any more than she already felt she was doing by staying in her house. 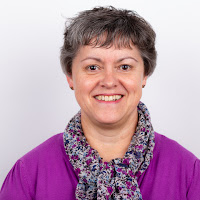 Julie Stock writes contemporary feel-good romance from around the world: novels, novellas and short stories. She published her debut novel, From Here to Nashville, in 2015, after starting to write as an escape from the demands of her day job as a teacher. Starting Over at the Vineyard in Alsace is her ninth book, and the second in the Domaine des Montagnes series set on a vineyard.

Julie is now a full-time author, and loves every minute of her writing life. When not writing, she can be found reading, her favourite past-time, running, a new hobby, or cooking up a storm in the kitchen, glass of wine in hand.

Julie is a member of the Romantic Novelists' Association and The Society of Authors. She is married and lives with her family in Bedfordshire in the UK. 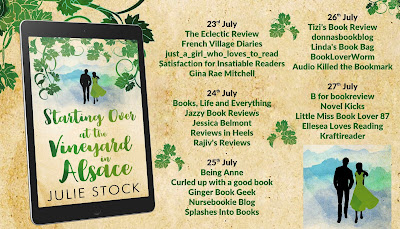 From one Gina on the tour to another...lovely post!

Thank you so much for sharing this extract on your blog. I really appreciate it - Julie Stock.