Hi there, everyone!  Welcome to Satisfaction for Insatiable Readers!  I'm very pleased to announce that today we are the featured site for the '28 Days of Winter Escapes' spectacular brought to you by HarperTEEN (HarperCollins)!  (Cue excited squeals of joy .... SQUEEE .... regain composure and continue typing....)  That's right!  Thanks to their amazing promotion, YOU have the chance to win a different book every day throughout the month of February!  I am very excited to have the chance to participate in this event and hope that you enjoy the feature as much as I have.  Now, on with the show! 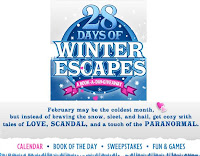 For today's post, you're in for a triple treat....you not only get a book review, but a Q&A with the author and a chance to win your very own copy of the book!  (Exciting, right?)  I had actually seen this title in stores once or twice as the brillant pink cover is definitely eye-catching, but I had not had the opportunity to snag a copy for my own reading pleasure.  Thanks to Jana at HarperCollins and her matching capabilities, the title and I found our own place in readers heaven.  Without further adieu, today's book choice is.... 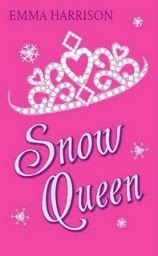 Snow Queen
by
Emma Harrison
Aubrey Mills is your average teenage girl.  All she wants is to hang with her friends, kick a little butt in a hockey game, and ....win a beauty pageant?  For this tom-boyish temporary transplant from Florida, a winter escape to Vermont with her best friend Christie to the Spotted Owl (her grandparents lodge) seemed like the perfect chance to unwind, play a little ice hockey, and catch her first glimpse of snow.  Little did she know what her trip would really entail.  We're talking girl-against-girl rivalry with the "greater-than-though" Chamberlain's, a potential romance with said Chamberlain's brother, and a serious lack of the white fluffy stuff.  Yep, things are looking decidedly downhill....oh, and did I fail to mention the beauty pageant?  (I did?  GASP!)
That's right!  Best friend Christie has always wanted to win the coveted crown at the Snow Queen competition and this is her year to enter.  The problem?  Christie has a bit of a confidence issue when seeing things through and so she not only entered herself in the competition, but Aubrey as well!  Let's see, sports loving tom-boyish girl plus a girly-girl pageant competition...equals a recipe for potential disaster!  It's No worries!  Aubrey is there to support her friend so win or lose, she'll be A-OK!  Well, that is until Layla Chamberlain begins her attempts to sabotage Christie and sparks Aubrey's competitive instincts.  The satin gloves are about to come off, but who will the ultimate winner be? 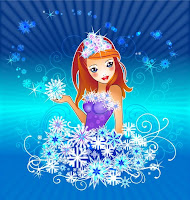 Okay, so when I first heard the book I was matched with for today's post, I wasn't sure what to think.  I mean, the title could go so many ways.  Once I began reading though, I can honestly say I was happy for the YA chick-lit type break.  (You need that sometimes from the heavier fantasy-laden reads, you know?)

This is the perfect book for a weekend escape.  You get to bond with your new girlfriends Christie and Aubrey, see the dark and light side of little-miss-perfect Layla Chamberlain (love her or not-so-much-love her, you gotta love the flippancy her character shows when she knows who her audience is....it's on rank with Dr. Jekyll and Mr. Hyde!), revel in the first notes of potential love with Grayson (whom I dare say would definitely be a site for sore eyes!), and hope against hope for that rare appearance of snow!  Being Southern state bound myself, I can totally sympathize with Aubrey.  I've lived where there was PLENTY of snow, but just when you want it...it decides to play hide and seek without telling you where to find it.  All in all, a fun little romp for your next reading adventure (in my humble opinion, of course).

Enough of my rambling....let's get on to the good stuff!  We've got a special treat indeed!  May I introduce....a special Q&A session with none other than author Emma Harrison!  (cue the applause.....okay, you may stop applauding now....people are staring, plus it makes it hard to read....)

Q&A with Emma Harrison
Aubrey tends to be a little clumsy around Grayson. What’s the most embarrassing thing you’ve done in front of a crush?
OK, this was REALLY bad. When I was fourteen I went shopping at the mall with my best friend. I was pretty new to bras, and the one I had on had an underwire (WHY, I ask you? I was basically an AA), which was really uncomfortable. So when I was in the dressing room at the Gap, I slipped the bra off and stuffed it in my shopping bag. (Technically, I didn’t really NEED to wear it. See above.)  A little while later we bumped into a couple of guys from school, including the boy I was crushing on. We had to leave soon, so we went outside to wait for my mom to pick us up, and the guys came with. They started asking us what we bought, so I yanked out this sweater I’d gotten on sale to show them, and out came the bra, which then proceeded to blow across the parking lot in the wind, with me and my crush chasing it. Yes, my crush was chasing my bra. While the other guys laughed their butts off. Sad, sad moment for me.

Christie is always pretty nervous around her crush, Jonathan. Do you have any tips for getting over nervousness like that?
I still get nervous talking to certain people, but I think the trick is to take it slow. Listen to what the other person is saying to you, then take a breath, then respond. I think what often trips us up is that we’re so nervous, we’re planning out what to say next while the other person is talking, and then we end up talking over them or saying something that has nothing to do with the conversation—which makes us look silly or self-centered. It also helps to remember that the other person might be just as nervous as you are. And he wouldn’t be talking to you if he didn’t want to be.

What’s your favorite romantic movie?
When it comes to romantic dramas, I love Sense and Sensibility with Emma Thompson and Kate Winslet, and Pride and Prejudice with Keira Knightly. The moment at the end of that movie when Mr. Darcy comes walking toward her in the sunlight . . . gets me every time. My favorite romantic comedies are While You Were Sleeping and The Wedding Planner, although I’ve been obsessed with The Proposal lately, too!

What do you think is most important to have in common with someone you’re dating?
I think it’s important that the two people like to do some of the same things. Not EVERYTHING, because you want to have some activities you can enjoy on your own that belong just to you. But I know that every guy I’ve dated has been interested in sports, food, travel, movies, and books, which just gave us a lot of events to attend together and mutually enjoy, and a lot of stuff to talk about. I don’t think I could be with a guy who didn’t want to take me to a Yankees game every once in a while, or play tennis with me or gorge on Italian food or sit at the movies a couple times a month. I know opposites attract and all that, but if there’s nothing fun you can enjoy together, then what’s the point?

What destination have you been to that you’d recommend for a romantic getaway and why?
I’d say Paris, but I was there when I was thirteen and I was with a bunch of girls from my school, so I can’t attest to its romantic side. Though I’d really like to take my husband there and find out! The most romantic destination I’ve been to with a guy would have to be Antigua. The beaches were gorgeous and the light as the sun went down over the ocean was amazing. And if I can dance outdoors with a guy I love to the sound of a Caribbean band while a warm balmy breeze tickles my bare ankles and the waves crash in the background, that’s really all I need.
~~~~~~~~~~~~~~~~~~~~~~~~~~~~~~~~~~~~~~~~~~~~~~

Review copy courtesy of Jana at HarperCollins.  I'd like to save a special thank you for allowing me to play host for the day on such a fabulous book promotion.  (THANK YOU!)  Special thanks as well to author Emma Harrison for the great answers and insight into this fun read (I too favor some of the movies you listed!).  To my readers, thank you for stopping by!  Be sure to check out our feature page for the day and enter for your chance to win your very own copy of this book!  Remember, this feature lasts through the month of February so check the widget every day for a chance at a different book!

You are so funny. What a great way to start my day

Great review and interview! I cannot believe that embarrassing moment she had! I think I would have died! My mom would have called that a character builder, but I think I'd have to argue that it's just plain embarrassing.

Anywho...the book sounds great. Just perfect, like you said, for a weekend getaway and great for girls of all ages. Great job!

Great review, I just saw this at the bookstore the other day! Thanks so much for stopping by my blog and for the nice words :) Thanks for entering my contest!!

LMAOS at your most embarassing moment with your crush:D its just soo funny and cute!! what did he say to you when he gave your bra back?:D

Oh poor girl, moving from Florida to the North where as I keep being told, "they have winter."

This one seems fun! Enter me please. :)

Thanks for all the great comments guys! I'm glad you enjoyed the review and Q&A...and good luck in the competition with HarperTeen! See you in the blogosphere....or on here, whichever comes first. =0)