Hello, hello!
Welcome back to Satisfaction for Insatiable Readers….where the reading is fresh and always served piping hot.

It’s February…in case you didn’t know…the month of LOVE (or a grim reminder of what you’re missing out on…depending on if you’re a glass half full or half empty kinda person). Combine with that the fact that it’s also FRIDAY and BAM…you have the perfect recipe for today’s post. How so? Ah, you’re about to find out.

Today is date night to many and for those looking for a 2D version of the potential man of their dreams (or simply a read that just so happens to feature two hunky guys in its varied cast)…I offer today’s selection. It’s about a girl with a past, or rather many pasts, that has many a decision ahead of her…besides the obvious everyday of what to wear and how much or little to study. Without further adieu, today’s book of choice is… 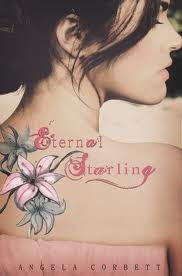 
A love so strong, even eternity can't separate them
Evie Starling has lived a relatively uneventful life hanging out with friends, gossiping about boys, and driving her 1966 Mustang. All of that changes when she moves to Gunnison, Colorado, to start college and meets two mysterious men.

For centuries, Alex Night and Emil Stone have yearned for Evie—but they each have their own reasons for wanting to be with her. When both men claim to be her soul mate and tell her about an unbelievable past, Evie learns that she’s not the person she thought she was. Soon, Evie finds herself in the middle of an age-old battle between the Amaranthine Society—the soul protectors, and the Daevos Resistance—the soul destroyers. With a past she doesn’t understand, and a future rife with danger, Evie has to decide who she can trust. But Alex and Emil aren’t the only ones who want Evie, and her soul is about to become the rope in an eternal tug-of-war.

Sounds exciting, right? It is! Alex Night is a gentleman; considerate, kind and never wanting to push things too far despite any high voltage feelings floating about. He says he’s there to protect Evie…but very exactly what or whom, he can’t truly disclose…at first. Then we have Emil Stone, the bad boy; he’s edgy, more modern in his freedoms, and won’t say no to a kiss at first sight (yes, that DOES happen and it’s quite a showstopper considering where and how it happens). He seems to be your average Joe otherwise…but that temper that flares just beneath the surface seems to be hiding something oh-so-dark. Both are a great catch, some for reasons more apparent than others but in the end, the truth is SO much more than you could have guessed. Now let’s talk a moment about Evie, the actual “focus” of the story….

After getting around the eye candy, we can clearly see Evie; a modern woman of the times, she loves to hike, spend time solo or with close friends, and adores her muscle car. She’s not exactly a girly girl but hey, there’s no rule book saying she has to be and her friends and family love her for who she is….that’s why her relationship with Alex and Emil is that much more difficult to navigate. While she has feelings for both in one way or another they clash in the most unusual ways….some speak to her emotionally and physically, others but up against her sense of self. Oh, and that’s BEFORE the “visions” she encounters when they touch. Visions you ask? Yes…visions. They each feature a girl of about Evie’s age and appearance with each of these fellows but the outcomes are anything but happily ever after. *cue mystery theater music*

There were two parts I had a hard time swallowing though. First, there were a few sections of the book where Evie’s personality seemed to flip like a switch…leading me to believe that either her resolve to be herself wasn’t as strong as I imagined or perhaps it was a tiny character building flaw. Second, the birthmark or rather soul mark of the flowers. Umm, yeah…that’s QUITE the beauty mark….I mean if my parents told me I was born with THAT, I’d be thinking…yeah, you got me tattooed when you were out of it. I mean, it’s lovely….but for a fantasy type story somewhat set in reality, I didn’t quite buy it.

In conclusion, an interesting concept with enough emotion to spark fireworks in the month of July and enough back-story revealed to allow readers a comfortable viewpoint at this early stage in the planned trilogy. I know I’ll be coming back for more….how about you? Recommended read for older Young Adult fans through adult…like I said….fireworks. ^_^  ARC for review received courtesy of Pendrell Publishing.  (THANKS!) For more information, be sure to check out the publishers site.  This book is now available through your favorite retail outlet.

From your summary of the two guys, I think I'd go for Alex, myself. I've never completely gotten the bad boy appeal in triangles. Oddly, I'm ok with bad boys if they're the only romantic interest, like in Hush Hush.

While I love faeries and stories about crossing into the fae realm are totally my cup of tea, I've read in several places besides here that Evie as a character was irritating and her constant mood swings felt like she had a personality transplant mid-book. For now, I think I'll be skipping this one, but maybe look at it again later on down the line.

Melanie: Nice choice...totally understandable...but let me throw a monkey-wrench in there. Emil? He may not be exactly as bad boy as he apears.... *dun*dun*dunnnnnn* ^_^

LoriStrongin: Well, to each their own. As I mentioned, there are a few areas where her personality seems "flawed" but overall I still enjoyed the story myself.

Nice review! Haven't heard of this one, but like the premise! As for Evie's personality, well, isn't she still a teenager? Teenagers are moody and changeable, so maybe she was just being herself?