A Christmas Kerril by Denise Jaden

Today's post is coming to you from me via our local library.  Why?  Well, it was UBER late last night/this morning when I finished reading the title and I find it best to be coherent when trying to type up my thoughts, don't you?  That's what I thought.  Anywho, so back to the setting....I'm in the Read-It-Again Bookstore in the lobby area of the library and I overhear two little old ladies conversing... 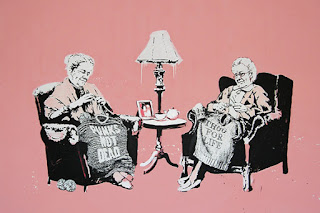 ...all while I stand about two rows over with a look of mild shock on my face (well, I'm sure there was and I could have confirmed it had I had a mirror handy).  Oye!  I mean, hello....you're in a bookstore, let alone a bookstore IN a library...not usually the best place for theater outings.  Kind of the home of the written word, you know?  NOt judging, just saying and slightly exasperated.  Anyway, it's all good, provided a small jolt to the heart, and aided me on my way back to my table to type of today's post.  So, shall we get to it?  *turns on The Piano Guy radio on Spotify*  Alright, I'm ready.... 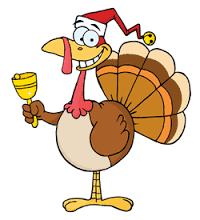 Today, we're featuring a holiday themed title that works for both turkey day and the forthcoming-and-being-forced-here-ever-faster Christmas season.  How so?  I'm glad you asked.  You see, it may be set in the month of December, be a newish blend of two very traditional holiday stories, and have a leading character who is anything but friends with the season she's thrown into, but it also reminds us to be grateful for the things we have as well as everyone that touches out lives.  Sounds like a winner, right?  It was on many levels, but let's get the formal introductions out of the way first.  Ladies and gents, teens of all ages, please make room on your reading lists and join me as we welcome today's ebook of choice... 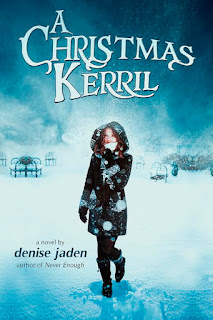 About the book...
In this modern take on a holiday classic, high school junior, Kerril, faces her past, present, and future to be reminded of the good in others, and in herself.

Haunted by the memory of the worst of her divorced parents’ public Christmas blowouts, Kerril, will do almost anything to avoid the upcoming tinsel-filled season. Unfortunately, a teacher with a grudge casts Kerril as the lead in the school’s holiday production. To add to the misery, she will star alongside ultra-awkward Adam as her love interest.

Wanting to ditch the play, Adam, her parents, and Christmas altogether, Kerril accepts an invitation to take off to a cabin with her ultimate dream crush, Perry – only Perry may not be the guy she hoped he was, and it’s not until she’s left Adam behind to fend for himself onstage that she realizes he might just be the guy of her dreams. 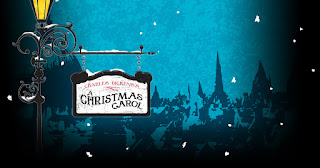 A little bit "It's a Wonderful Life" with "A Christmas Carol" and a healthy dose of modern teen drama...that's the interesting concoction you get in this wintry snow globe of a book.

Our leading lady Kerril has an unusual gift (curse?).  She has lucid dreams.  Curious what that is?  According to Google and Wikipedia, it is defined as "any dream in which one is aware that one is dreaming".  In Kerril's case, it means she can also manipulate them to her whim and explore things her subconscious picked up while her conscious mind was wandering away.  Pretty cool, right?  Umm, I'll take a pass on them if it's all the same to you.  Where this "talent" comes into play here is not exactly a pleasant experience, for it seems to lock our girl into reliving her families less-than-finer-moments, i.e. Christmas time three years ago.  Let's just say that the parents were definitely on the naughty list and their reactions in turn to what was revealed did nothing to sort that situation out.  *ahem*  Anywho, the tragedy and upset left Kerril despising the season and stepping right into the role of a modern teen Scrooge-ette.  In our modern times, we have the right to express ourselves our love or lack thereof of the holidays how we see fit...she would rather they pass and leave her alone.  Or does she?  This year is going to be a BANNER year.  So much is happening and she's about to be put center stage to it all...literally, and whether she likes it or not.  True, she still has free will....to make decisions, choices, MISTAKES, and the like, but she also has a good heart.  Will the joys of the season help thaw her icy feelings or will she self-destruct like an angry little elf leaving a path of ruin and heartache in her wake?  Only one way to find out...

Kerril, Kerril, our little Christmas Kerril.  You and I had a love/hate relationship throughout the story.  Your Scrooge-y side was in full swing about halfway through, so much so that I almost smacked you upside the head through the pages.  I appreciated your candor when it was allowed breathing room (page 151, the quote about Christmas in retail....DEAD ON!), but your wishy-washy decision making skills need a rest.  Make up your teenage mind already!  Will you or won't you?  It's your choice, your LIFE, and you have to live with whatever consequences you set into motion.  After all was said and done though, I'd still call you friend.  Now Adam I found truly mesmerizing.  He's not a character that usually gets the spotlight as more than a sidekick or passing fancy.  Here, he gets a pretty big starring role both in the story and the play.  I loved the way he was depicted, the challenges he faced and how it was handled.  His stutter wasn't danced around, but faced head on....for better and worse.  Were kids mean to him?  You bet.  Were the parents less than helpful in building his confidence?  Definitely....and as harsh and evil as that all sounds, it felt real.  Again, a sad point for sure....we should be beyond things like that in today's world, but not everyone is and the way Kerril (and friends) interacted with him, helping, and guiding, was refreshing.  It warmed the heart much like the additional coal on Scrooge's fire.

On the sidelines, we have the additional characters that had face time (sometimes in the literal sense as well).  There's Perry, the boy Kerril's been crushing on forever who is currently seeing one of her friends.  That boy, I'll tell you what.  I don't care what he looked like or kissed like, just...no.  I know he had problems of his own, but it wasn't helping anything to create BIGGER ones and for crying out loud....let the girl go.  The girl in this case would be his girlfriend that seriously, despite the fact that she's not the nicest and is pretty much the Tiny Tim of the story, deserves better.  Another soul to note would be Brooke, Kerril's bestie...but truth be told, I'm not really feeling this friendship as a two way street.  I think she was more caught up with the ailing friend's predicament and her own love life than anything else.  I'm not saying she was fully in the wrong but friendship is a give and take...there really wasn't much of that going on here.  The supporting cast list could keep going, illuminating Kerril's parents (ugh), teachers, and Dream Adam (you'll have to read the book to see who this is), but they are best left for your own discovery. 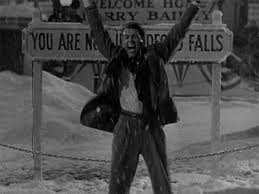 In conclusion, Kerril is definitely no George Bailey, especially with her face plant in the snow, but she comes through like a true Christmas angel who just scored her wings (*rings bell*).  The road was tough, littered with wrong choices, regrets, and worries, but with a little help from past, present, and future (and a pretty cute dream-guy), she just might see the beauty of the season and wish YOU a merry holiday.  I admit, I had a hard time finding the other aspects of the Dickens tale here though.  The ghosts of past, present, and future weren't really that clear, and only after some pondering on my part after the fact, did I really see how they were represented.  While reading the story, it simply blends into all that is transpiring.  Is that a bad thing?  Certainly not, it's just a quirk I noticed and was trying without end to figure out; saving you some unnecessary displeasure.  Just read it through, THEN look for the pieces.  They'll fall into place.  Recommended read for teens through adults.

I am, or have been, everything from a professional Polynesian dancer and fitness and strength competitor to a mushroom farmer and church secretary.Most of my time now is spent homeschooling or playing with our eleven-year-old son or in front of my computer writing. I’ve been writing for about twelve years. I’ve published fiction for teens and nonfiction for writers, as well as short stories and articles for magazines.My pet peeves include clutter (somebody please tell my husband this!), wet socks, and being cold (which is a common occurrence in B.C.!)

Special thanks to Kathy at I Am a Reader, Not a Writer for the ebook for review as well as the chance to bring this promotion to you.  (THANKS!)  For more information on this title, the author, or those promotions on the horizon, feel free to click through the links provided above.  This title is available now, so be on the lookout for it on a bookstore shelf or virtual retailer of your choosing.  Be sure to check out the other books spotlighting this title through November 15th!

Email ThisBlogThis!Share to TwitterShare to FacebookShare to Pinterest
Labels: 2015, A Christmas Carol, book review, classic with a twist, eBook, holidays, I Am a Reader Not a Writer, young adult