BOOK SPOTLIGHT: Let Me Die in His Footsteps by Lori Roy

Today, we're shining the BOOK SPOTLIGHT on a title that's just about to celebrate it's birthday.  That's right!  Tomorrow, the title of the day hits bookstore shelves both virtual and physical via Dutton, an imprint of Penguin Random House.  It's technical classification is Suspense/Thriller...but perhaps calling it the "next-title-added-to-your-bookshelf" is more appropriate.  Ready or not, here comes our eager celebrant... 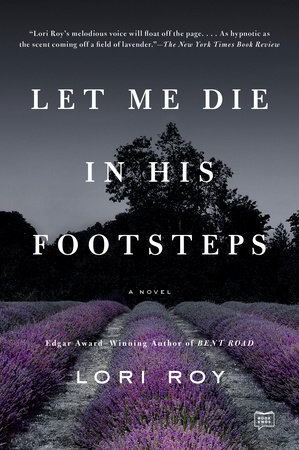 About the book....
On a dark Kentucky night in 1952, exactly halfway between her fifteenth and sixteenth birthdays, Annie Holleran crosses into forbidden territory. Everyone knows Hollerans don’t go near Baines, not since Joseph Carl was buried two decades before, but Annie runs through her family’s lavender fields toward the well on the Baines’ place, hoping to see her future in the water. Instead, she finds a body, and Annie’s future becomes inextricably tied with her family’s dark past.

In 1936, the year Annie’s aunt, Juna Crowley, came of age, there were seven Baine boys. Before Juna, Joseph Carl had been the best of all the Baine brothers. But then he looked into Juna’s black eyes and they made him do things that cost innocent people their lives. With the pall of a young child’s death and the dark appetites of men working the sleepy town into a frenzy, Sheriff Irlene Fulkerson saw justice served—or did she?

As the investigation continues and she comes of age as Aunt Juna did in her own time, Annie’s dread mounts. Juna will come home now, to finish what she started. If Annie is to save herself, her family, and this small Kentucky town, she must prepare for Juna’s return, and the revelation of what really happened all those years ago.

Lori Roy's debut novel, BENT ROAD, was awarded the Edgar Allen Poe Award for best debut novel by an American author. BENT ROAD was named a 2011 Notable Crime Book by the New York Times, a 2012 Notable Book by the state of Kansas and nomiated for the Book-of-the-Month Club First Fiction Award. Her second novel, UNTIL SHE COMES HOME (Dutton 6/13) has been named a New York Times Editors' Choice.

Lori Roy lives with her family in west central Florida.

Special thanks to Emily at Penguin Random House for the head's up on this release.  (THANKS!)  For more information on this title, the author, the publisher, or to pick up a copy to call your own, feel free to click through the links provided above.  This title is set to release JUNE 7th, 2016, so be on the lookout for it on a bookstore shelf or virtual retailer of your choosing.