READ TO WIN with the AW Teen Summer Reading Challenge!

ATTENTION FELLOW READERS!
WE JUST GOT SOME EXCITING NEWS COURTESY OF CASEY AT MEDIA MASTERS PUBLICITY THAT YOU NEED TO KNOW!


Join the AW Teen Summer Reading Challenge and win books!
Who: Everyone who loves reading YA!
What: Read any AW Teen title (full list here: http://www.albertwhitman.com/teen/) and review it anywhere (your blog, Goodreads, Instagram, YouTube—wherever!).

Elena Martinez has hidden her eidetic memory all her life—or so she thinks. When powerful tech giant Aether Corporations selects her for a top-secret project, she can’t say no. All she has to do is participate in a trip to the future, and she’ll be set for life. Elena travels with four other teens with special skills, including Adam, a science prodigy. Soon they find themselves running out of time, and deadly secrets are uncovered. Can Elena and her new friends figure out how to change their futures?
Resurrecting Sunshine (ARC)
Seventeen-year-old Adam Rhodes is famous, but he’s been in a downward spiral since he lost the girl he loved, Marybeth, who went by the stage name Sunshine. Then, Adam is approached by Dr. Elloran with Project Orpheus, who wants to resurrect Sunshine. As the process sweeps Adam and Marybeth ever closer to reliving the tragedy that destroyed them, Adam must decide how far he’ll go to save her.
Until I Break (ARC)
Two boys: One is a star athlete and top student with a deep-seated need to prove himself. The other is a chip-on-his-shoulder quarterback who will never settle for second best. When gunshots echo through the halls of Broadmeadow High School, whose finger is on the trigger? This unforgettable novel counts down the twelve months leading up to an explosive moment.
Biggie (paperback)

At an obese 300+ pounds, Henry “Biggie” Abbott prefers classroom success to sports. As Biggie’s junior year begins, the girl of his dreams, Annabelle Rivers, starts flirting with him. He’s been told to follow in his dad’s footsteps and play baseball, but Annabelle might be the one to actually convince him to try.
Girl Last Seen (hardcover) 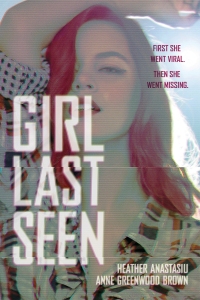 YouTube stars and best friends Kadence and Lauren recently had a major falling-out over Kadence’s boyfriend. Kadence launched her solo career when a nasty throat infection paralyzed Lauren’s vocal cords. And she knows how deceptive Kadence could be sometimes. But nobody believes Lauren when she claims she had nothing to do with Kady’s disappearance.
Hurricane Kiss (hardcover)

For sixteen-year-old Jillian McKay, the threat of Hurricane Danielle means a long car ride with her neighbors—including River Daughtry, the former star quarterback of Harrison High. The guy who was headed to glory until suddenly he disappeared to a West Texas juvenile detention center. Once cocky and flirtatious, he’s now silent and angry. But their evacuation route is soon gridlocked. As the teens wait out the storm, they confront the past and realize survival is more than just staying alive—it’s about fighting for yourself.
Join the fun and get your read on this summer!