So, the weather...she is SO unpredictable right now...at least in my neck of the woods.  I live in NW FL, so we're keeping our eye on that Irma character lurking in the islands at the moment.  Fingers crossed and eyes raised in prayer that it keeps heading further towards the east, though I truly don't wish it on anyone.  Anywho...while I'm battling the surging customers (I work in retail...let's just say there are Thanksgiving type crowds and madness, but without the delicious turkey dinner to look forward to) and keeping a weathered eye on the weather, how about you direct your attention to this curious read....

Today's title on deck came to me via Caitlin Hamilton Marketing and Publicity, LLC.  It stars the sophomore release of this particular author (new-to-me) and a  work of Fiction that manages to snag several larger issues within its story weaving web.  Interested?  Well then, what are we waiting for!  Today's book of choice is... 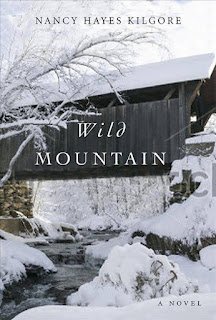 About the book...
Vermonter Mona Duval loves the covered bridge beside her store. She loves local history and the rugged, rural nature of her home state. But when an ice storm collapses the bridge, she is bereft. Frank MacFarland, a seasonal resident who is beguiled by Mona, lends his political expertise to help rebuild the bridge. But they meet with powerful opposition. Tensions arise in the town, compounded by resistance to the soon-to-be-voted on Freedom to Marry bill. And then, unexpectedly, Mona's abusive ex-husband arrives. Wild Mountain is a page-turning, beautifully written novel about the love between Frank and Mona, the love of place, freedom to marry, and freedom from the past, by a writer whose prose has been compared to Alice Munro's.

The story creates a visual picture of the beautific landscape of Vermont, both how it is, was, and could still be. It's a somewhat lyrical journey, embracing the wonders to be found in nature, the exhausting supply of deities, entities, and "powers that be" to believe in, and how a seemingly small change in landscape can have a much bigger ripple effect.

What at first glance I thought to be a tale of a woman's life changing right from her very foundation and her having to muster to push through or accept defeat...which I would have been fully satisfied with...ended up being intertwined with many heavier issues (surprise!). We've the spousal abuse she experienced in her past come to haunt her in her present. There's the subject of gay marriage and the fight for equal rights, each tackled as a topic but also something deeper as it directly affects several character's lives as well as plays a role in a spiritual aspect of the story. We've the constant battle to strike a balance between the past and the future, and the unexpected impact those decisions can have on our present. There's the reconciliation of old loves and new possibilities, both in the mind as well as the heart. We even have a contemplation on who it is exactly that's responsible for our world in the first place (non confrontational to readers though), and what they really wanted for us as a people. Pretty heavy stuff, like I said, but interesting just the same, and it still plays well with the side story of potential love to be found.

In the end, while not at the top of my favorites list, it did subtlety work its way into my heart.  For me, the most memorable moments were Frank coming to the aid of the baby moose (~tear~), Mona's reaction when the covered bridge was in peril (~double tear~),  and the unexpected freedom found in the passing of two souls (one we'll mourn, the other...not so much).  So take a chance, and welcome the autumnal reads with a wordy walk through the Northeast US of A.  See what catches your eye, your thoughts, and your heart...

Nancy Hayes Kilgore, a writer and psychotherapist, and was 2016’s winner of the Vermont Writer’s Prize. Her writing has been nominated for a Pushcart Prize and her first novel, Sea Level, was a Foreword Reviews Book of the Year. Formerly a parish pastor, Nancy leads workshops on writing and spirituality for clergy, therapists, and writers throughout the U.S. She lives in Vermont with her husband, a painter, and expresses her passion for nature, spirituality, and psychology through writing.

Special thanks to the Caitlin Hamilton Marketing and Publicity, LLC team and Green Writers Press for the ARC for review.  (THANKS!)  For more information on this title, the author, the publisher, this promotion, or those on the horizon, feel free to click through the links provided above.  This title is set to release October 1st, 2017, so mark your calendar or pre-order your copy today!