Today, we're joining a Quill & Ink Book Tour already in progress as we explore between the epages of the final installment of The Four Worlds trilogy by Angela J. Ford.  You may recognize the name from a blast we featured not so longer ago starring this very title, and you'd be correct...but I couldn't simply let it go with that tease.  Ready or not, here comes today's ebook of choice...

Run, run as fast as you can. Never stop...Changers have arisen, wreaking havoc as they harvest the world, searching for the Green Stone. The South World sinks in despair, holding its breath, waiting for the One. Eliesmore is a Blended One, growing up on the edge of the forest of the creatures of the wood. Young, headstrong, and inspired by magical rituals, he spends his time between his overprotective mother and sneaking out to dance with the wild things. His courage is tested when Eliesmore discovers that he is the One who is meant to save the Four Worlds from the Changers. Unwilling to accept his fate, he turns his back on the prophecy and the futile quest to dissolve the Green Stone. But Eliesmore will soon learn he cannot escape his destiny. Beset by creatures of the deep and hunted by servants of the Changers, Eliesmore finds his task will test the loyalty of his companions and help him answer the ultimate question: Can he trust the immortals – or are they the reason the Changers have come to power?

There was a creak, and the door opened. Unbothered, Eliesmore looked up, expecting to see Optimistic. Instead, his eyes met Glashar’s. She was clothed in golden light, and hints of mint and lavender drifted around her as she shut the door. She had bathed or at least cleaned herself from the journey. Her golden hair had a bounce to it, and her eyes were brighter than he’d ever seen them. “Eliesmore.” She shut the door, leaning against it for a moment to ensure no one was listening in. “I have come to tell you about your wound.” Eliesmore smoothed his fingers over the map, arching an eyebrow as she approached him. “What do you mean?” Glashar covered her mouth with her hand, her long fingers touching her nose as she considered. He felt like he could see thoughts move through her mind, shifting through what she knew versus what she wanted him to know. “I used all my powers to heal you, yet I fear the Rakhai may retain some control over you.” Even as she spoke, Eliesmore knew what they could do. They would call to him, draw him out, and try to force him to give up the Green Stone. Before, this knowledge would have frightened him, forcing him to react out of fear. It may have been the strength of the fortress or his companions that reassured him. “I will be aware.” Glashar nodded, opening her mouth once again. A thought perched on the edge of her lips; she had knowledge that she did not want to escape. Her face turned a shade darker. “Be careful.” She turned to leave, although Eliesmore could tell she had more to say. It burst out of her when she reached the door. She glanced over her shoulder, her sharp chin almost jutting into her thin shoulders. “Beware the Green People. They are up to something.” Eliesmore froze. “What?” “I am an Idrain; the Green People are Iaens. I know my kind. We are treacherous. We care only for ourselves and our wishes. Once they are granted, we leave the mortals to their own folly. The Green People set in motion the events of the world long again; now they have come to fruition. There will come a time when you should stop trusting the Iaens.” She opened the door, her eyes repeating the warning as she disappeared. Eliesmore sat still, eyes glazing over as he stared after her. What should he do? Who should he talk to? Frustrated, he stood and began to pace back and forth, wondering what he had gotten himself into and questioning whom he should trust.

This was a curious adventure with a wide range of fantastical characters and creatures intricately created to pull you fully into their realm.  Whether you start at the beginning or the end (well, the beginning of book 3), you'll feel right at home...though as always the more the merrier when it comes to reading, thus you'll get a richer experience having the others under your belt.   That being said...

I fully enjoyed this Fantasy tale of dark and light, good and evil, hidden futures and pasts that are revealed with time.  I reveled in the night dances that dear Eliesmore had the pleasure of joining, once upon a time, while my heart sank at the loss of that unbridled joy for reasons unknown.  I feared for his safety once he set out upon his journey, though he did not know it was truly his at the time, and gasped in despair when it seemed he had given up his own future for something less dangerous but oh-so-more detrimental for the world at large.  I was curious to see if the Green People were really all they seemed, or simply hiding their true colors, so to speak.  I was fit to be tied when it looked as though we might not reach the end we so desperately sought with the newly pledged One fighting on our side...but even at that darkest moment...hope still glimmered like a light in a fathomless night.

In the end, it was adventure worth taking with characters you'll grow to love, loathe, and something in between.  I likened it to a Young Adult version of the LOTR in some ways, though obviously not a copy in the least and with its own brand of magic and wonder to enthrall, enchant, and otherwise ensnare the mind.  A great pick for Fantasy and YA Fantasy fans, as well as those newer to the genre. 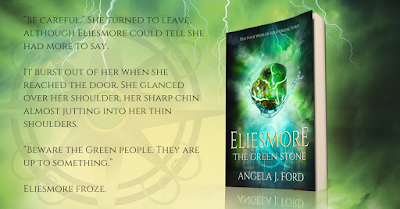 Brought up as a bookworm and musician, Angela J. Ford began writing The Four Worlds Series—a fantasy series—at the age of twelve. The storyline of those books was largely based off of the imaginative games she played with her sisters. Angela originally finished the series when she was sixteen. After college, Angela began to rewrite The Four Worlds Series, bringing it from a child’s daydream to an adventure young and old can enjoy. Since it is inspired by fairy tales, high magic, and epic fantasy, Angela knows you’ll enjoy your adventures within the Four Worlds. If you happen to be in Nashville, you’ll most likely find her at a local coffee shop, enjoying a white chocolate mocha and furiously working on her next book. Make sure you say hello!

Special thanks to the Quill & Ink Book Tours team and author Angela J. Ford for the ebook for review as well as the chance to bring this tour to you.  (THANKS!)  For more information on this title, the series, the author, THIS TOUR, or those on the horizon, feel free to click through the links provided above.  This title is available now, so click on over to your favorite online retailer to begin your adventure today!