Today, we're joining Rachel's Random Resources for a stop along their current tour for the second title in the Friendships Online series.  It just celebrated its BOOK BIRTHDAY earlier this month (*throw confetti*) and is all ready for your afternoon reading escape.  If you read the first release, then you're primed and ready to go as the party just ended and the next steps in Constance's journey are about to begin.  Ready or not, here comes today's blog tour guest and ebook of choice... 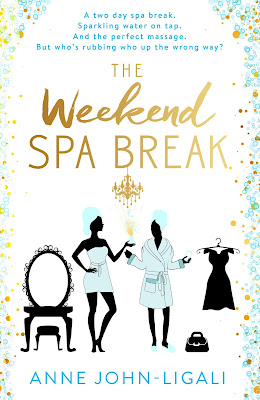 About the book...
After finally meeting in person at the publishing party of the season, Constance and Estelle are determined not to let their friendship return to mere virtual champagne bottles and uploaded pictures of food.

It’s been a busy year, and Constance feels it’s time to reward herself with the spa break Estelle gave her for Christmas. Naturally, Constance wouldn’t dream of taking anyone other than Estelle, and this will provide the perfect opportunity to bond with her new chum.

As the excited pair spend some quality time together, they realise it’s not just writing books they have in common, but something that goes much deeper. After a few Jacuzzi sessions, facials, pedicures, and a massage by sexy Senior Therapist, Julio, everything seems to be peachy until an unexpected visitor turns Constance’s weekend of bliss … on its head.

A two-day spa break.
Sparkling water on tap.
And the perfect massage.
But who’s rubbing who up the wrong way?

For the life of me, I don't remember the first installment of this series being quite as long, covering nearly as much time, or having a HUGE TWIST to the story line pop up at the end...but maybe it's just me?  *double checks first review...nope, not just me*

Here, we have the continued story of Constance...romance writer, adoring mother, jilted fiance...beginning at the end, or at least where the end of the first story left off.  (Love the lack of time gap!)  She's met some of her online acquaintances, and while some she'd rather not hang about, there are others that fast turn into friends.  Some add humor, some bring style, some  have attitude to spare, whether or not any of these things are actually valid matters not because they are delivered with confidence and that makes anything lacking in luster THAT much more appealing.  Anywho...one new friend would be Estelle, and she's about to learn that they share more than simply genres as these two gals take a much needed break from life and head to Glitzy Spa.  A weekend of relaxation, pampering, oversharing, and perhaps a little flirtation is just what the doctor ordered...but wait, who requested the room service serving of psycho?  Yeah...about that....

I was all in for the weekend trip, and getting to know Constance and Estelle better, but I was a tad confused (as was Constance for that matter) by the sudden appearance of someone...rather unexpected...and with ties to someone else that were clearly unknown.  Let's just say things get more than a bit tense and the lacksadaisy housekeeping of one of these gals is gonna prove to be a lifesaver.  I suppose I was basing my initial impressions of it off the first in the series, thinking I was in for another light and quick read brimming with social media savviness and authorly fun...but in the end, the added pages and heavier story line served to set us up for another installment COMING FALL 2018!  Needless to say, you've got plenty of time to get caught up in the series in the mean time should you so desire...or can plan on a mini-binge later in the year.

Anne John-Ligali is a writer and the founder of Books and Authors UK, a popular website featuring author interviews and book reviews. She loves all things books: reading, writing, going to book events, and meeting other book lovers. She has written a series of short stories and is currently writing her first novel.

Anne has always loved stories and read many books as a child, including the entire Sweet Valley High and Caitlyn series. Her interest in writing fiction came years later, when she began writing for pleasure in 2007.

Originally from Peterborough, Anne now lives in London. After moving to London, she studied graphic design at the University of Arts and has held a number IT administration jobs in the city. Anne continues writing and aspires to write more women’s fiction books, a non-fiction book and several children’s books. 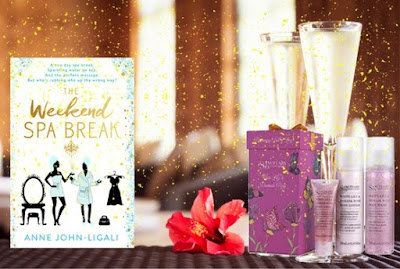 To enter, all you have to do is visit the author's Twitter page and retweet the pinned tweet showing this GIVEAWAY.

A winner will be chosen at random by Tweet Draw and announced on Saturday the 19th of May at 20:00hrs.

Special thanks to Rachel at Rachel's Random Resources for the chance to bring this tour to you as well as the ebook for review.  (THANKS!)  For more information on this title, the author, the series, this tour, or those on the horizon, feel free to click through the links provided above.  This title is available now, so click on over to your favorite online retailer to snag yours today!  Be sure to catch the rest of the tour as it makes its way through the blogosphere... 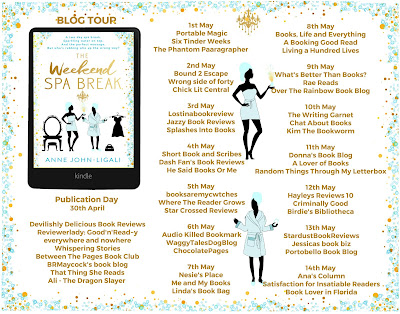