Hello, everyone! Welcome back to Satisfaction for Insatiable Readers! You may have noticed (or may not have, but for my sake, I will pretend you did) that my blog has a new look. You may even have some comments on that look or the navigation menu wording, etc....that's good! Leave me your comments or feedback...don't be shy! Hopefully you are as thrilled with the new set up as I am (okay, so I'm giddy about it, but I'm guessing you're a bit more subdued) and it will keep you coming back for more great finds! Enough with my jibber-jabber, let's move on to what you REALLY came here for.

The feature of today's post came my way as an ARC (advance reader copy) from the good folks at HarperCollins! (Thank you HC! You rock!) The official release date (as of this post) is 09/29/09 so mark your calendars! Today's book choice is....

Secret Society
by
Tom Dolby
"Secret Society" by Tom Dolby tells the story of the socially privileged and just how far some are willing to go to preserve their way of life. Focusing on the lives of four young students from Chadwick Prep, we are introduced to both the light and dark sides of their lives.
Lauren is one of the popular crowd who one day wants to go into fashion design. Nick is the guy who skirts the outer edge of his families privileges trying to make a name for himself and endeavors to become a club promoter. Phoebe is new in town and looking to one day devote her time to her true passion...art. Patch is in the same creative sphere although he wants to work in media productions. All of their worlds collide after a mysterious invitation from the Society is sent to three of the four, widening an unseen rift between them.
Not to worry though, there will not be an odd man out in this story. Patch anticipated his non-message recipient situation and planned ahead. Using his vlogging connections (for those not in the know, a vlog is a video version of what you're reading...essentially) and bits from his parents mysterious past as revealed by his lovable grandmother, Genie, he had the forethought to rig recording equipment to capture the mysterious Night of Rebirth ceremony. Let's see there is drinking, masked guests, and oh yeah, tattoos of an ankh placed on the backs of their necks to label them as Society members.
This footage is highly sensitive and highly prized by all those in high places as it would expose the organization and its members, both of which are deeply rooted in everyday society. Unfortunately, these same people are also willing to do anything to keep their secret, secret. Has Patch gotten himself in too deep? Will his friends be able to save him from a seemingly eventual downfall? Or will they be so swept away by the life the Society sets them up for that they leave their friend by the wayside? Society life seems so perfect. Your dreams handed to you on a silver platter...but what if that platter is served by gloved hands? Do you really know who you can trust? 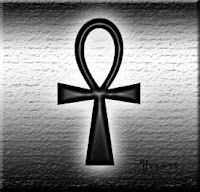 You'll have to wait until the book's release to find out! Hate to leave you wanting more, but I must! I will say that I liked the incorporation of the Egyptian theme and the connections to the city that were revealed in the book. Don't worry if you aren't into the historical aspect of the novel though, although it is an integral part of the Society, it is mentioned more in passing than in detailed explanations. The characters were also realistic in their reactions to the situations they encountered; their feelings palpable through the pages. You would be hard tasked to guess the conclusion through all the twists and turns....better to get initiated and enjoy the ride!
Feel free to leave your comments and feedback!
Until next time....happy reading!
Posted by Gina at 2:49 PM