The More the Merrier?: Another Faust by Dina and Daniel Nayeri

Welcome back, everyone!  I hope you had a wonderful weekend!  Mine, a bit stressful, but all in all it worked out semi-decent.  Managed to finagle a little reading in as well as a movie (went to see Whiteout...not bad!), thus providing the fuel for today's entry.  Before I jump into that...just wanted to wish everyone a happy Book Blogger Appreciation Week!  There will be various posts throughout the week in support of this event and if you're not quite sure what it's all about, check out their site for more info!  Alrighty then...on with the show!  Today's book of choice is... 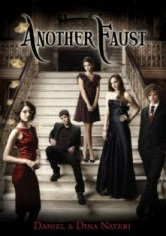 Another Faust
by
Daniel and Dina Nayeri

We begin with five children.  Each one is longing for something more than what they currently have (umm, who isn't?)...so strongly in fact that it becomes a weakness or flaw in their character tainting their hearts black (which becomes visible when wet.....an odd, yet intriguing write in).  If you haven't heard the old adage, "it's not what's on the outside but what's on the inside that counts"....this book will certainly show you where that came from.  Let's take a look at our cast....

One day, these five little children disappear.  Just like that....all at once.  Surprisingly though, NO ONE MISSES THEM.  It's almost as if they weren't really there in the first place.  (they were though)  The cause of their common disappearance, a chance (not really) meeting with Madame Nicola Vileroy.  She promises gifts for each child to reach the dreams and desires they have, but they have to make a deal....the gifts to reach their dreams, for their very souls.  (GASP!)  Three of the four make the deal readily, hungry to get all they can.  Christian's not so certain about this decision and Bice is flat out against it.  What happens when the flock doesn't follow their shepherd?  What bigger plan are they fueling by making this deal?  They'll soon find out.  On the stage set as New York City and the prestigious Marlowe School for a background, new meaning is brought to High School H.....heck.  =0)

Personally, this book was not all I had imagined it to be (hang on, I promise not to decimate it).  I found it hard to go back to this one once I put it down, and yet as I was reading it, I did still want to know what happened in the end.  (Indecisive, huh?)  I think that for me the reason behind my detachment is the fact that the story, although some what interesting, is told through way too many character's eyes.  I mean, you keep bouncing back and forth between each of the Faust children (5 in all!), and Madame Nicola Vileroy, it makes it hard to develop a relationship with the characters (keep reading, that's not as creepy as it sounded....).

When a story is told through one person's eyes, you really get to know their voice, develop a mental image...become their imaginary friend as it were.  You are invited into their world as a guest and are able to partake of their adventures (although in this book, you may not want to experience some of the events....think shock and awe..).  I didn't really feel that connection with this book.  That's not to say that I didn't appreciate the story with it's twisted plot and religious/historical tie-in's (multiple references to legion as well as one to the forgotten tongue), or the flashback type entries at the beginning of each chapter (those were really good), but overall, it did not strike a happy note with me.  Even the ending (as I was hurridly reading the last few pages at about 3 AM....), left me with a funny taste.  It's not quite an ending, nor is it a beginning as the book suggests.....it just sort of ends.

Whew!  There I said it.  Not the most glowing review, but honest and respectful none the less.  Would I buy this one personally?  No...I think I'm happy with the read I finished from my friend's copy. (Thanks, Bri!)  Will I be checking out the next installment in the series?  Probably.  I'd be interested in seeing just where the story would lead and with whom.  Do I think YOU would like it?  That's not truly for me to say.....your tastes are your own after all....I'm just here as a guide (or chef) to show you potential options.  I would leave this recommendation as a "to each his (or her) own".

For those interested in finding out a bit more about this brother and sister writing duo or the "Another" series, check out the authors website at Daniel & Dina.  It also looks like they are available on Twitter, @DinaNV and @DanielNayeri.

COMMENT CREATOR
Have you read this title yet?  If so, who was your favorite character?  If not (or if you feel like answering this one too), if you could be given any power in the world, what would it be and why?
Feel free to leave your comments and feedback!
Until next time....happy reading!
Posted by Gina at 4:30 PM

Great review! Thanks for being honest...I had been wondering about this book. I've seen it a few times lately.

An interesting review on a book I've heard a lot about though I haven't read it myself.

Given any power in the world, what would it be? I think I'd like the ability to tele-transport from place to place - it would be lovely to be free of my crutches and be able to move so freely.

Annie: Thanks! Glad you appreciated the honesty...wasn't sure if everyone would.. =0)

Juju: Nice to see you again...and thanks!

Petty Witter: That would be a great power! Free from any physical limitations...and able to by pass morning traffic too! =0)