Hello, everyone!  Welcome back to another day, another post...here at Satisfaction for Insatiable Readers!  Before we get started, a few things.... First off, the meme from yesterday's post (Taste Testing Tuesday)...definitely looking for feedback on whether or not you like the title and/or the picture.  I ended up with 4 or 5 choices and the results of that are what you see...but just trying to make sure it was the right decision!  My second "thing" to mention is a funny (and slightly irritating) life-type encounter....

So...over the weekend, we swung by the local drive-thru fast food joint (which shall remain nameless) to order a rather simple item....a soda.  (GASP!  I know, what was I thinking!  That's a crazy item to order!  You have no idea....read on....)  Now grant it I had a coupon from a previous visit thus making the item free but it shouldn't be that complicated, right?  (HA!  Oh, sorry...continuing...)  Pull up to the window, kind of hear the "may I take your order" speech and clearly state "I would like to redeem my coupon please for one free medium drink".  I was answered with a "you what" and so repeated the request with slightly altered text thinking maybe I was too quiet or something the first time.  This time I received a "so you're saying you have a coupon for this" as if it's so far fetched (HELLO!  It was on the RECEIPT they gave me from the last visit....), so I sorta-politely said "yes, that's why I said I want to REDEEM it".  I mean for crying out loud, the darn thing says "to redeem this offer..." right on it.  So where was the problem?  Bad day....crazy person....lack of knowledge of the English language....don't know, but in the end my thirst was quenched.  (Sorry to bombard with this retelling, but come one....really?  Was the order that hard?)

Speaking of other languages, or in this case accents specifically, today's book choice is a short read that makes an impression.  It is a children's biography as far as genre's go, but I think it definitely works for readers of all ages on many levels.  Without further adieu....today's book choice is.... 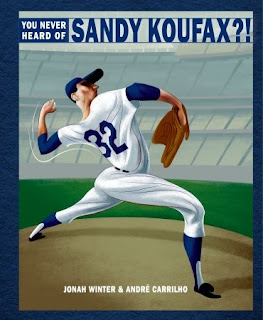 (HI THERE!  The following is purposely typed incorrectly.  Just read it as you see it....all will be revealed.)  Picture this.  Yous at the ball park.  Hot dawg in one hand, baseball mitt on the other...ready to catch that fly ball if it so dezires to come your way.  Such is the life of a spectator.  But life ain't no spectator sport.  It's for the wheelin' dealin' players that take what they've got and show'em whose boss.  Don't believe me?  I'z got a feelin' yous will once the story of Sandy Koufax is revealed.  Regular all American ball player?  Don't think so.  See he was more and less than that all rolled inta one.  Yous had to know him to see where he was coming from, but only he knew where he was goin'.  (OKAY...you may now resume your regularly scheduled accent....although I may slip back into the accent once or twice.)

Such is the tale dispelled in this charming cross between a children's picture book and biography.  Sandy Koufax was a talent in his own right.  Signed to the Brooklyn Dodgers at 19 years of age, he was one of the only Jewish ball players making it big at the time.  Funny thing about this kid....although signed to play, he was very rarely in rotation.  No practice = no improvement, and being the rookie he was, he needed all he could get.  Time after time, year after year, he was pitchin' fast balls and wild throws left and right.  Then one day, something changed.  Sandy Koufax went from being a nobody run of the mill player, to being THE Sandy Koufax, pitcher extraordinare.  What changed?  Where did this sudden focus come from?  You'll have to read it to find out.... 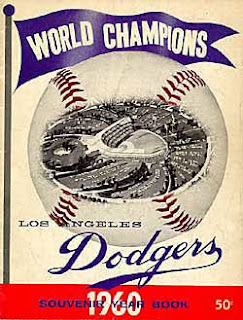 I must say that of the books I have read recently. this has got to be one of my favorites!  No, I am not a huge fan of baseball (or sports in general).  No, I did NOT know who Sandy Koufax was prior to this book.  I did however enjoy the story for multiple reasons.  First, it was short and too the point.  The author clearly had a summarized version in mind when embarking on this work and stayed to the straight and narrow to deliver the memorable moments (which are many).  Second, throughout the book, there are small factoids regarding baseball, Sandy Koufax, and other memorabilia to add to the learning experience.  Thirdly, the pictures throughout the book fit wonderfully with the story allowing for those needing a boost to their imagination to entertain the mental movie creation process as well.  Last but certainly not least (probably my favorite thing too), is the way the story is written.

You know when you are reading and you gain a mental picture of the character?  With the added descriptions and characteristics provided by the author, you tend to give them a certain look, and a certain...voice.  In this story, the narrator has a distinctive aspect to his voice as well.  Now it may be just me, BUT this story is actually written in what I like to refer to as "Brooklyn-ese".  What do I mean?  Well, for those of you that have been there before or spoken to people from that region, you know exactly what I'm talking about.  For those that haven't, re-read the first paragraph of this review....the way you are pronouncing the mistyped words due to their mispelling....that's similiar to "Brooklyn-ese".  (I mean no offense to anyone that has this accent currently reading this post....just shining a light on your unique regional mannerism!)

COMMENT CREATOR
I know sports can be a controversial subject, but we are a friendly community of book readers and bloggers, so I will still "throw" this question out to you....what is your favortie sport?  To play, to watch, to tweet and/or blog about....what sport hits a home run with you?  While you're at it, feel free to share your favorite team!

If I had to choose one, I'd go with the Penn-State Nittany Lions (football).  Why?  They're from my home state and not so far away from hometown...not to mention I had a really cute shirt as a child with their mascot and logo.  (Thanks, Mom!)

Special thanks to Random House Kids for both the book itself and the contest through which I won my own copy! (Psst.....it was via Twitter.  May I recommend following them for great book news, recommendations, and contests?  Oh wait...I just did.)
Posted by Gina at 11:50 AM

Hi there!
I have an award for you!

What a cool book! I'm not a baseball fan, but I am a diehard hockey (Pittsburgh Penguins), rugby (Australia of course) and aussie rules (Geelong Cats) fan.

I just can't seem to get into baseball, but I do love my sports :)

Who would have thought getting a soda could prove so difficult.

We never get to see/hear much of baseball here in the UK unless, of course, it's a film on baseball. Basketball, yes, baseball,no.

Favourite sport? I'm not really into sport but I will watch the five nations rugby when its on - I love to see the New Zealand Allblacks perform their 'dance' - how Husband dearest hates it when I say that, "dance?" he'll say in a certain tone of voice.

Michelle: *SMILE* Thank you so much! You totally made my day....and it is now proudly displayed on my sidebar!

Bella: Ahhh, another Pennsylvania team fan. =0) That's right, you posted the pics of your little one in the jersey. Future fans in the making.

Petty: LOL. It was truly unexpected (soda). Interesting that you don't hear about baseball over there....I guess each region caters to the favorite sport...although I wouldn't have guessed basketball either! LOL again with the "dance" mention. I could imagine that would irk him....or most male sports fans. Thanks for stopping by!