Hello there!
Welcome back to Satisfaction for Insatiable Readers…the place the be when you’re in the mood for good company, a fun bookish discussion and of course, your potential next read!

Today, we play host to a book tour making its way through the blogosphere via Tribute Books Blog Tours (Hi, Nicole!) and starring a Young Adult ebook series you won’t want to miss. Okay, so it's actually for book two in the series, but when the option was presented to feature BOTH titles, I took it and ran.  That’s right!  I’m admitting right here, right now that I DID in fact enjoy them…so if you want to cut out to the “what-book-is-it” part, feel free, but if you’d rather hear (well, read) my thoughts…keep chugging right along because here they come.  Today’s books of choice are from the Midnight Fire series by Kaitlyn Davis… 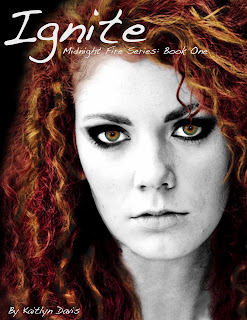 Welcome to !  It’s your Senior year and you’ve just been dropped off in the middle of no-man’s-land to finish off your pre-college (or in Kira’s case, pre-gap year) days.  Aren’t you special?  *-*  No, not really because who wants to switch schools at this point in their lives?  *crickets*  Exactly.  It’s hard enough being the new girl (I should know!) but when you’re working with those who’ve mostly known each other for at least 2-3 years, let’s just say making friends is not the easiest thing to do.  Lucky for our leading lady, she has a knight in shining armor to take the lead.

Luke is certainly not hard on the eyes, quick with the wit and a blast (no pun intended…yet) to be around.  The typical good guy, he’s one of those that can either be your best friend for life or something more, but Kira’s fate seems to be tied to the later…for now.  There’s another vying for her interest though not quite as hard (at first).  He’s a bit of an outcast for reasons to be explained and falls under the “bad boy” category with flying colors (though if he has a heart of gold, you’ll have to read to reveal)…his name is Tristan.  He’s “been around”, knows the lay of the land, and how to bring color to a girls cheeks…oh and did I mention he’s not hard on the eyes either?  What’s a girl to do?  Oh wait…that’s not the whole gist of the story!

You see there’s this whole part about Kira’s hidden past and in discovering who or what she is, she could destroy the very life she’s been building to the core.  It involves a world of Protectors and Punishers with powers , vampires that can go in the sun AND have a heartbeat, a plotline building to a crescendo that’s ready to explode!  But I digress…I shall sum this one up with an acknowledgement that the book lives up to its title; it will “ignite” a desire in you to read on.  Now, let’s have a looksie at the second installment…. 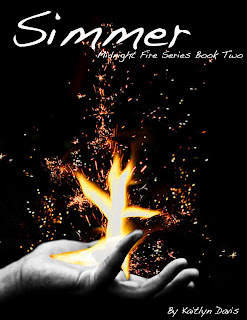 Again, a book true to its title, this one takes everything that was added to the pot in the last story and brings it to a nice rolling simmer.  Feelings are expressed, connections (literal and emotional) are explored, boundaries are tested and Kira learns more about where she comes from…and possibly what her future holds for her.  This time around, there’s more planning and plotting going on but with plenty of action to keep you on the edge of your seat.  There’s certain parts where I kept being interrupted in my read and really, you simply can’t put it down.  The history of Punishers and Protectors is explained in more detail (not boringly so either, just more in-depth so we see where everyone is coming from), Tristan’s nature is tested as is his control, Luke pushes the limits of his friendship with Kira and the face down we’ve been waiting for comes to fruitation…with surprising results.  Yes, this was a great addition to the series indeed and one I’m sure you’ll be pining for once you’ve read book one.

THE GOOD:  If you’re a fan of Young Adult fiction, this one’s for you.  We’ve got vampires, non-vampires, and humans (notice there are THREE distinctions…the reason for that is mentioned above for those of you that skimmed the post…^_^), a love triangle, friendships to test, lives that can be destroyed, secret pasts lurking in the shadows and unknowable futures that contain far more than what they’ll be doing this weekend. You'll make friends with Kira, choose sides with Tristan and Luke, and fall in love with the story at heart about a girl with so bright a future....even shades aren't gonna cut it.

THE NOT-SO-GOOD:  There are a few grammatical issues scattered about (very few, but still there) and the vague likeness of the work at times to other pop culture icons in this arena (i.e. Twilight, Buffy the Vampire Slayer) can give you a crick in the neck….but again these have a minor effect on the overall work.  Once you’re hooked, believe me…you’ll be coming back for more.

THE UGLY:  Hmm…umm….NADA.  Nope.  Can’t honestly think of a thing to fit into this category…then why the inclusion of it?  Well, it rounded things out.  ^_^  ..plus I like to keep you guessing.  (hehe)  No really, there’s no “ugly” running around these parts unless you include a character or two you love to hate, but then again THAT’S what they’re there for!

﻿ ﻿
In conclusion, a great series you won’t want to miss.  (Wait, I think I said that already…cie la vie, it warranted a double statement of it.)  I wasn’t sure what to expect honestly when I first started and the vague references to other works made me question my choice further, but once I finally plunged into Ms. Davis’ world, there was no turning back.  The story caught fire as did my interest and I’ll be fanning the flames until the release of book three.  (Anyone know when it’s coming out?  I needz to know what happens next!)

Ebooks for review courtesy of Nicole at Tribute Books Blog Tours.  (THANKS!)  For more information on these titles as well as their upcoming tours, feel free to visit them online.  As this is a part of a blog tour, my site is not the only stop so be sure to check out all the fun to be had as author Kaitlyn Davis makes her way through the blogosphere at the official tour site.  Today's scheduled stops also include Books-n-Kisses and All Things Books; tomorrow be on the look out for her next appearance at Fictional Candy and vvb32 reads!  Speaking of the author, she can be found other places online as well so if you’re inclined to like, follow, pin, or visit…feel free to click through the links included here and you’ll be whisked away to her neck of the virtual woods.

The first two books in the Midnight Fire series are available now; here are a few sites to get you started should the desire to purchase be stronger than the time it takes to search them out online…

Gina, you always do such an awesome job with your reviews. Your attention to detail just blows me away. And I love how you make me feel like I'm sitting across from you while you tell me your thoughts on the Midnight Fire series. I'm so glad you enjoyed Kaitlyn's books and can't wait for the third! Your intro had me cracking up too - I always like to know right off the bat if a reviewer liked a book or not :)

Love the summarizing!! Sounds like an interesting read, thanks for reviewing.

The 'UGLY' part totally scared me for a second there!! haha, thank you so so much for this amazing review and for all of the tweets!! The extra exposure really means so much to me!

I hope you enjoyed being part of the tour! I'll definitely get back to you when Blaze comes out :)

Tribute Books: Aw, thanks Nicole! ^_^ I just try to share with my readers the best way I know how, and the personal nature of it keeps it accessable I think. Glad I could be a part of this awesome tour!

Kaitlyn Davis: My pleasure! I love spreading the word on great reads and your series certainly left its mark. Best wishes...and definitely staying tuned for Blaze!