Hi there!
Greetings and salutations my friends.
Welcome to Satisfaction for Insatiable Readers, your online outlet for bookish fun day in and day out. 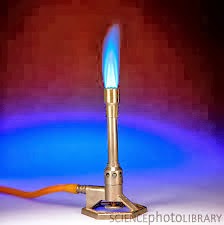 Today, we’re burning up the blog waves with some scientific fun for the middle grade (and older) crowd courtesy of Quirk Books.  It happens to be book two in this particular series but can certainly be read as a stand alone and not only provides an entertaining mystery to solve, but the chance to get a little hands on fun too.  Curious?  You should be and for those that read book one (Nick and Tesla’s High Voltage Danger Lab) , you already have some idea of the adventure that awaits, so don’t use your insider info to spoil the fun, use it to taunt and tantalize!  (^_^)  Don’t worry friends, I won’t leave you in the dark for long, lest a mini-book-reading-robot roll your way and run off with your very best bookmark (*GASP*).  Today’s book of choice is…. 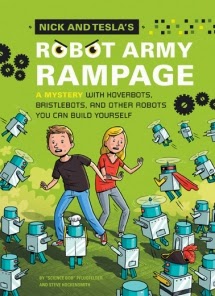 Nick & Tesla’s Robot Army Rampage:
A Mystery with Hoverbots, Bristle Bots, and Other Robots You Can Build Yourself
By
“Science Bob” Pflugfelder & Steve Hockensmith
9781594746499
Quirk Books

WARNING:  CONTAINS WALKING, BUZZING, AND FLYING ROBOTS YOU CAN BUILD YOURSELF!


When a rash of robberies hits the town of Half Moon Bay, 11-year-old sleuths Nick and Tesla are determined to catch the criminals = but to do so, they’ll have to build a host of new gadgets and gizmos!  In this robot-themed follow-up…the brother-and-sister duo build four different droids out of ordinary household objects – and illustrated instructions are included throughout the story, so you can build them too!  Can Nick and Tesla catch the criminal mastermind – and foil his army of rampaging robots – before it’s too late?

It’s a romping, stomping, one measured step at a time, Science Fiction story come to life as robots invade Nick and Tesla’s small town life.  How did these creations come to be in every Tom-and-Harry store in their downtown?  Simple…just ask one Dr. Sakurai.  She’s a mastermind when it comes to robotics and inventions, having followed the same path of schooling and work roles as the children’s charmingly eccentric guardian, and just as she has a way with electronics, she’s sparks a positive reaction in Uncle Newt.  Yep.  That’s right.  The kids have more to worry about this time around than simply their parents whereabouts (how long can you REALLY study the growth of beans?), a missing comic book of substantial value (which if it remains lost will leave DeMarco and Silas no longer local buds), mysterious activity at the jewelry store after lights out (dun dun dunnnn), or even Uncle Newt’s latest invention attempt (a vacuum that runs off decomposing bananas…two letters for you, P-U!)….they have to watch out for his little science loving heart.  Hey, even the geekiest of the geeky can fall in love, and there’s no faster way to his than brains AND beauty.  Anywho, back to the adventure of the mind not the heart…

The local rise in crime is suspicious to say the least, especially when taking into account the other new arrivals both of the flesh and metallic variety.  Fingers get pointed, assumptions are made and folks get painted as the red handed criminals….they might not actually be.  Oh, but wait…just like in book one there are twists and turns, some that involve bagel basketballs with curiously paper centers, while others give us that hands on option I mentioned before in actual robotics, but rest assured, they are FUN, they are CREATIVE, and they are guaranteed SATISFY.

So, what am I saying?  What’s my final answer, the solution to my hypothesis, the experiments final outcome?  (hehehe)  It was a good addition to the series, and while lacking a bit of the danger that brought excitement to book one, still speaks well for the future titles to come…and really, how can you go wrong with the included option to build a ROBOT for crying out loud?  I’ve got my eye set on the hoverbot.  Yep.  If I get around to it, you’ll be the first to know.  ^_^

Review copy courtesy of Eric at Quirk Books.  (THANKS!)  For more information on this title as well as their complete catalog of quirky wonders, be sure to check out their official site, follow along on Twitter or friend them on Facebook.  This title celebrated its book birthday this past February, so be on the look out for it on a bookstore shelf near you.  Recommended read for Middle Grade fans of all ages, but the experiments should be done with adult supervision only.  OH!  One MORE thing…BOOK THREE in the series, Nick and Tesla’s Secret Agent Gadget Battle, will be brought to life this May! In the mean time, be sure to explore the series official site.

A big fan of books that encourage hands on fun, this definitely sounds like a book I could enjoy with my great nephews when they get a little older..... That's if I could prise it away from my husband who I know would love it.