Greetings.
Welcome to a bookish part of the galaxy not so many light years away, Satisfaction for Insatiable Readers.
Today I ask thee to join me in a pleasure cruise to the outskirts of the known galaxy (well, literature and film wise at least) with a cast of characters familiar yet ready to get their Bard on; as in THE Bard.  You know, Shakespeare!  That’s right!  William Shakespeare’s Star Wars is BACK with another exciting installment in this growing-in-infamy trilogy that’s smashing genres with a vengeance…but not too much vengeance because there’s that whole tendency to turn to the dark side with anger leads our way and yeah, I don’t envision calling Vader my “home-boy” anytime soon.  Kay?  Kay.  Now, back to today’s book of choice…. 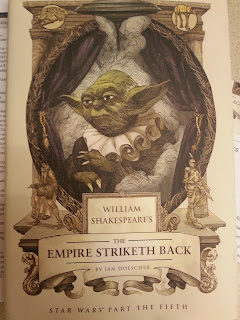 William Shakespeare’s
The Empire Striketh Back
Star Wars ® Part the Fifth
By
Ian Doescher
9781594747251
Quirk Books
About the book…
…Many a fortnight have passed since the destruction of the Death Star.  Young Luke Skywalker and his friends have taken refuge on the ice planet of Hoth, where the evil Darth Vader has hatched a cold-blooded plan to capture them.  Only with a little green Jedi Master – and a swaggering rascal named Lando Calrissian – can our heroes escape the Empire’s wrath.  And only then will Lord Vader learn how sharper than a tauntaun’s tooth it is to have a Jedi child.
What light through Yoda’s window breaks?  Methinks you’ll find out in the pages of The Empire Striketh Back!
~~~~~~~~~~~~~~~~~~~~~~~
Alright fanatics, it’s time to geek out…and before you ask, no, I’m not toting the flag for either team per se (the teams being Star Wars and Shakespeare) but I do enjoy both quite a bit, making this mash up a jolly good time indeed.  For those that have seen the movies (or nay, perhaps read the original stories), you shan’t be lost in this galaxy trolling adventure.  Events play out much the same as you’ve been previously shown….just with a twist.  The Shakespearean spin on things allows readers to both claim intellectual points in regards to their reading choice as opposed to just simple enjoyment (thought that’s more than enough) as well as allowing some characters previously unheard, a voice and back story to flesh out and dare I say, enhance in some ways, the original script.  *ducks flying objects*  Sorry friends but those are my thought points and I’m sticking to them.
Now for those with inquiring minds who want to know, the author touches on the finer points of this creation in an epilogue section, covering everything from his choice in rhyme and meter to tackling Yoda’s speech patterns in a still recognizable form without duplicating the original efforts.  In my opinion?  A job well done!  Our green little Jedi master is still as formidable as ever, offering up his words of wisdom and more from a vantage point somewhere around what, say, 3 feet tall?  Hey, the Force doesn’t require height to be strong; it’s the power of the mind and the heart.  My favorite part though, aside from reading R2D2’s witty repertoire outside of the beeps and squeaks, would have to be seeing Han and Leia’s relationship unfold.  No, seriously!  The verbal sparring both exchanged and muttered under their breaths, the small worded tokens of flirtation that charge the air faster than you can say AT-AT, all add a new dimension to that whole situation that’ll leave you with both a smile and a smirk.  Trust me, both are warranted.
So, still on the fence about a classic sci-fi story brought back in time to the Victorian era and how the final creation on stage would play?  Be assured my friend, be assured.  It doth stand up remarkably well, and affords a good time is had by one and all.  Recommended for fans new and old of either genre or writer; there’s nothing any more or less shocking than is in the original screenplay and really…who hasn’t seen (or doesn’t know someone who’s seen) that by now?  Oh and if you haven’t, get thee to a DVD/BluRay retailer near you…unless you live on Dagobah, in which case I doubt there’s any around, but who knows what the next smuggler’s ship passing by might bring?
Review copy received courtesy of Eric and the amazing team at Quirk Books.  (THANKS!)  For more information on this title, the trilogy, and more, be sure to stop by their official site, friend them on Facebook, or follow along on Twitter.  This book was released this past Tuesday (March 18th, 2014), so verily be on the watch for it on a bookstore shelf near you.  Oh and for those that caught that “trilogy” remark, yes….book one is out, book two is featured here, and the final installment (i.e. book three) releases this July baring the title, The Jedi Doth Return.  Don’t know about you, but I can’t wait.  ^_^
Until next time…happy reading!
Posted by Gina at 5:13 PM