Hi there!
Welcome back to Satisfaction for Insatiable Readers, the place to get your daily fix of bookish fun every day of the week.

Today, we’re jumping into the land of Fiction with a humorous twist…though depending on how close you are to our lead characters personality, is how funny or not funny you’ll find it.  No worries…I’ll explain…but first, the introduction!  Today’s book of choice is….. 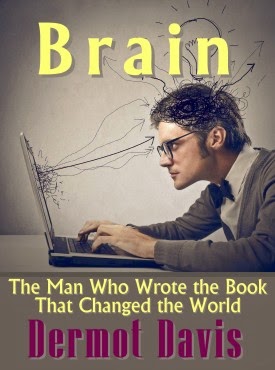 Brain:
The Man Who Wrote the Book That Changed the World
By
Dermot Davis
9780984418138
Expression Unleashed Publishing

About the book….
It’s the classic dilemma of the artist:  Do you write what’s in your heart or do you write what sells?  In this modern age of publishing there is a huge chasm between the best selling authors that are rich beyond their dreams and…well, everybody else.  All Daniel Waterstone ever wanted to do was write the great American novel and change the landscape of modern literature forever.  He has two literary books in print but no one’s buying.  His agent won’t even accept his latest masterpiece which he poured his soul into; apparently, it’s not commercial enough.  In a final act of desperation, Daniel decides to write – not what’s in his heart but – what he thinks will sell.  Boy, did he get that one wrong…

So.
Daniel Waterstone.
He’s an interesting character.  Yep.  Sure is.
When we first meet our star, he’s riding his self induced high of author-dom dreams as he puts the final touches on his masterpiece….only to have those fantasies come crashing down around him in so many fiery type ridden pages.  In short, he’s a mess.  Life couldn’t get any worse…well, unless you factor in a run in with a “self-help guru” that’s hit the big time.  Yeah, that’s pretty much the straw that broke this camel’s back.  Down, down, DOWN we go into a man sized rabbit hole as we lose lights, transportation, and pretty much all sense of time, space, and self.  Hitting rock bottom with a GIANT thud, he finds himself with nothing better to do than the CRAZIEST thing he can POSSIBLY think of...AND IT WORKS. 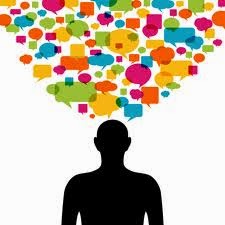 Now before anyone out there gets any bright ideas of following his example, allow me to illustrate a view points…

There…now that that’s been said.
While his idea is INSANE, what happens next is just as (or perhaps even more) outrageous.  I don’t want to spoil it for you but seriously, it defies all logic while still somehow making sense.  Would it happen in real life?  Doubtful…and certainly not with all the explosions, self-realizations, stalking, and mind melding.  That’s just preposterous…right?  Maybe not….which brings to mind the fact that REALITY is most often stranger than FICTION….but in this case, probably not.

While the story leads you on a goose chase to who knows where, the characters leave their mark for better or worse.  Our leading man doesn’t really lead all that much, including himself, until the false reality he’s created explodes into something much bigger than himself.  It opens doors he previously could only imagine and brings him to a discovery he wasn’t anticipating.  Suzanne, his agent, doesn’t really make a good case for having an agent as she’s a bit of a bad apple but we can see the solid gold intentions of all those in her team that really believe in what they’re doing.  Clare, his potential love interest but not but then again possibly, is a curious cat with some interesting problems but she has a good spirit and an open mind that really helps Daniel on his way.  Like I said, an interesting bunch (and more still left unmentioned) that really breath life into this story of strange coincidences and conundrums.

So in short, it boils down to this…it’s a book about a man who writes a book about life that’s taken for something it’s not, which somehow turns him into the poster child for all those lost souls seeking something more…with an explosive ending.  (Ha ha ha ha HA!)  It reads well, more intellectual than you’d anticipate, much like our leading man,  and finishes with enough flurry to grant it a final bow.  While it may not be for everyone, really…what book is?  If you’re up for a curious look at the world of the writer, a chance to see behind the hype into the minds of those creating the art we digest on a daily basis, or simply like to view humanity in its many forms of mental stress…this is the book for you!  It’s a great reminder of the things that really matter in life, even if you can’t see it coming.  Take it with a grain of salt, or if you prefer a salt rim, and enjoy the ride….err, read.

Dermot Davis is an award-winning playwright, screenwriter and author. His creative work encompasses varied genres and styles: drama, comedy, and, more recently, sci-fi; with a special focus on human themes and characters transformed by life experience. A sometimes actor, he was formerly a child actor in Dublin, Ireland and the co-founder of the Laughing Gravy Theatre (which performed Irish literary works as well as original stage plays of Mr. Davis) where he and other members of the troupe toured the US (culminating with being invited artists-in-residence at the prestigious Piccolo Spoleto Festival in Charleston, SC). He is a 2013 International Book Awards finalist and also a finalist in the 2013 Readers’ Favorite Book Award Contest.

Review copy courtesy of  author Dermot Davis. (THANKS!)  For more information on the author or the publisher, feel free to click through the links included within the post.  This title is available now via Expression Unleashed, so be on the lookout for it on a bookstore shelf near you or at an online retailer of your choosing.

lol. This sounds like a neat idea for a story. Cool. :) Thank you.