Edgar and the Tree House of Usher by Jennifer Adams

Hi guys!
Welcome back to Satisfaction for Insatiable Readers.
Today, we're posting in the wee hours of the night to suit the title in the spotlight.  It's a new take on a creepy classic that's the latest addition to the BabyLit First Steps series from author Jennifer Adams.  The star is a particularly precocious raven﻿ and the author's work his stories take for a turn would be Edgar Allan Poe.  Sound familiar?  It might as I have featured another of his adventures right here on the site, but if not, there's no time like the present to make his acquaintance.  Ready or not, today's book of choice is... 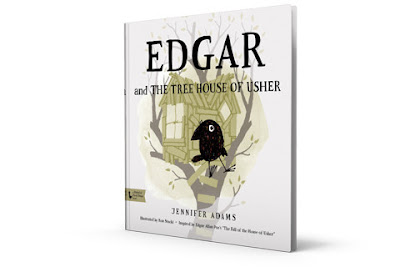 Edgar and the Tree House of Usher
by
Jennifer Adams
Illustrated by
Ron Stucki
9781423640431
Gibbs Smith
Obviously from the title, we're taking a crack at the Poe classic, The Fall of the House of Usher.  Despite having seen the Vincent Price rendition, I've actually read this story as well (and reviewed in on my site, in case you were wondering) and thoroughly enjoyed every passage.  While this one bears some resemblance, it is in a much more passing variety as opposed to its predecessor, Edgar and the Tattle-Tale Heart.  Don't get me wrong, I enjoyed it overall, but if we're pulling similarities, we're talking VERY BASIC.  Let's see, there's a brother and a sister close but only just, and...oh, yes...a terrible fate befalling the "house" come books end.  That's about it for the connections, which may cast a small cloud for avid Poe fans, but fear not...there are other reasons to celebrate.
As with Poe's stories, the true fun is hidden in the details.  From the painting of Poe hiding out in the tree house to the barrel (aka cast) bearing the word AMONTILLADO that Edgar's little friend is perched upon, there are hints and tributes to the writer/story that inspired this work throughout the book.  In addition to these, the book becomes even more interactive when in order to view a page due to it's increasing height, you literally have to turn the book the opposite direction to continue the story.  Well now, one wouldn't put a tree house in a short stubby tree now would we?  It's those little add ins combined with the creative storytelling and sparse illustrations that create the magic that is Edgar the Raven...and friends. 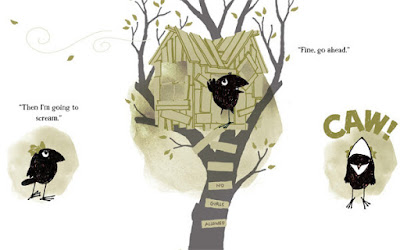 In conclusion, quoth the Raven forever more...and with an even younger generation with this fun and fabulous series aimed at the kiddos but fit for Poe fans of all ages.  While tiny tikes will walk away with lessons learned (this time on barring girls from their tree houses), older readers will catch the humor and tribute points scattered throughout, making it a great addition to anyone's library, public, classroom, or personal.
~~~~~~~~~~~~~~~~~~~~~~~~~~~~~~~~
About the author...

Jennifer Adams is the author of thirty books, including the board books in the bestselling BabyLit series, which introduce small children to the world of classic literature.
Her children’s picture books, Edgar Gets Ready for Bed, Edgar and the Tattle-Tale Heart and Edgar and the Tree House of Usher are inspired by Edgar Allan Poe’s poem “The Raven.” She also has two new picture books forthcoming from HarperCollins.
Her titles also include books for adults, including Y is for Yorick, a slightly irreverent look at Shakespeare, and Remarkably Jane, notable quotations on Jane Austen.
Jennifer graduated from the University of Washington in Seattle. She has 20 years’ experience as a book editor, most recently at Gibbs Smith, Publisher and Quirk Books. She works some evenings at her local independent bookstore, The King’s English, to feed her book habit. Jennifer lives in Salt Lake City with her husband, Bill Dunford, who is also a writer.
~~~~~~~~~~~~~~~~~~~~~~~~~~~~

Special thanks to author Jennifer Adams for the copy for review.  (THANKS!)  For more information on this title, the series, the BabyLit collection, the illustrator, or the publisher, feel free to click through the links included above.  This title is available now via BabyLit, an imprint of Gibbs Smith, so be on the lookout for it on a bookstore shelf or virtual retailer of your choosing.
Until next time...happy reading!
Posted by Gina at 10:54 PM