A Light in the Desert by Anne Montgomery

Today, we're headed out West with a Fiction title that is mighty curious indeed.  There are so many different elements running about, it's hard to wrap your mind around at times, but when reflected on at book's end, the mystery becomes clearer.  Ready or not, here comes today's book of choice... 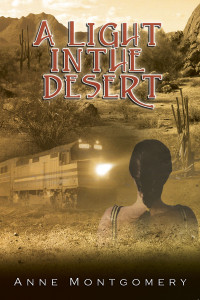 About the book...
A Light in the Desert traces the story of a pregnant teenager who bears an odd facial deformity, a Vietnam veteran and former Special Forces sniper who, as he descends into the throes of mental illness, latches onto the girl, and a group of Pentecostal zealots – the Children of Light – who have been waiting over thirty years in the Arizona desert for Armageddon.

The Amtrak Sunset Limited, a passenger train enroute to Los Angeles, is derailed in their midst’s, a deadly act of sabotage. Their lives are thrown into turmoil when local and state police, FBI investigators, and a horde of reporters make camp by the twisted wreckage of the Sunset Limited. As the search for the saboteurs continues, the authorities find more questions than answers. The girl mysteriously vanishes, the assassin struggles to maintain his sanity, and a child is about to be born in the wilderness.

As I said, SO many different elements.
There's religion, secrets, abuse, vandalism, murder, and mystery...just to name a few.  Separately listed, they seem an odd bunch; put together as one and they create a unique story to say the least.

The basic gist?
Kelly Garcia is a teenager whom fate has not smiled upon. Unloved by her stepmother and overly so by her stepfather, she's a ship without a port to call home in circumstances that are beyond her control.  Despite what was written in her cards, others outside her blood relatives take a shine to her, wanting to do what's best by her and her soon to be born babe.  Between The Children of the Light and Jason Ramm, her future may not be so hard to imagine...that is until some nutters decide to take out the train she just happens to be on.  Grant it those behind the atrocity have had their share of problems, but if we let that be an excuse for improper behavior, than Kelly should be able to do anything carte blanc without someone so much as batting an eye.  No need to worry though, the truth has a way of catching up to people, even when they feel out of reach.

Now, along the way, there are mishaps and situations that no one could possibly predict...yes, outside of the train wreck that is.  One such instance leads a man who prefers the company of the bottle to believe he being visited by the Mother of God while she is with child.  Another finds a man getting lost in his own mind, only to come out believing he is the Messiah.  Finally, that ending!  I'm still reasoning through it and rightfully so when it circles back to Jason Ramm's beginnings.  Nothing is exactly what it seems here, but it reminds us that the same is true in life.  We can't simply take things at face value or from merely what's observed.  What appears to one person as a kidnapping is interpreted as a rescue by another and still a third person may think it was nothing out of the ordinary.  Observation alone doesn't tell us what the circumstances are behind what we are seeing, only experience can take you there.

In the end, an unusual read that will really resonate with some and possibly perplex others.  Personally speaking, I fall somewhere in between the two and I'm perfectly fine with that.  Not every book is cut and dry, sometimes the best ones leave us asking why until we puzzle and puzzle and puzzle things out to a conclusion we can believe in.  Here, Kelly and Jason were obviously the true heroes but I also rather enjoyed Dog the dog.  What can I say....I'm a pet lover and she was an exceptional judge of character.  Recommended read for adult audiences due to some content and concepts discussed. 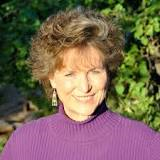 Anne Butler Montgomery has worked as a television sportscaster, newspaper and magazine writer, teacher, amateur baseball umpire, and high school football referee. She worked at WRBL‐TV in Columbus, Georgia, WROC‐TV in Rochester, New York, KTSP‐TV in Phoenix, Arizona, ESPN in Bristol, Connecticut, where she anchored the Emmy and ACE award‐winning SportsCenter, and ASPN-TV as the studio host for the NBA’s Phoenix Suns. Montgomery has been a freelance and staff writer for six publications, writing sports, features, movie reviews, and archeological pieces. When she can, she indulges in her passions: rock collecting, scuba diving, football refereeing, and playing her guitar.

Special thanks to author Anne Montgomery for the signed paperback for review.  (THANKS!)  For more information on this title, the author, or the publisher, feel free to click through the links provided above.  This title is available now via Sarah Book Publishing, so be on the lookout for it on a bookstore shelf or virtual retailer of your choosing.

Always intrigued by characters that are slightly different, a Light In The Desert certainly sounds like it has this. then there's the religion, secrets, abuse and vandalism. Yeah, sounds like a promising read to me.

Yes bring it on Books like this are top shelf with me I loved the review It opened the window on what adventure I will expect. Thanks for the preview can't wait to read it

Wow...that covers quite a bit of territory there with all of those elements! Sounds interesting.

It was certainly curious to say the least. :)

Yes indeed. A hard one to pull off FIR the very same reason though.

Thank you, to all of you. I kind of like the thought of being in the strange and curious realm.
And my thanks, especially to you, Gina, for taking the time to read A Light in the Desert.
:)

My pleasure! It's definitely not a bad place to be! :)