Once Upon a Pyramid: The Pharaoh's Cat by Maria Luisa Lang

Yesterday, we traveled to the West; today we're heading to the West...Nile.  That's right!  Pack your headress and don your flowing white robes accented with gold, we're heading to ancient Egypt for a curous tale that could only be told by....a cat.  Yes, a cat.  Curious?  Well then, let's get this show on the road!  Today's book of choice is... 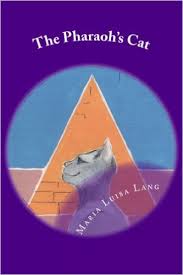 About the book...
The Pharaoh’s Cat, narrated in the present tense by the cat himself, is the story of a free-spirited, quick-witted stray in ancient Egypt who suddenly finds himself with human powers joined to his feline nature.

The cat immediately captures the attention of the seventeen-year-old Pharaoh, making him laugh for the first time since his parents' death, and is brought to live with him at the royal palace.

The cat also becomes friends with the High Priest of the god Amun-Ra and seeks his help in solving the mystery of his human powers and the supernatural manifestations that later plague him. He has an enemy in the Vizier—the Pharaoh's uncle and the second most powerful man in Egypt. The Vizier hates him for himself and even more for his relationship with the Pharaoh.

The cat participates in festivities at the royal palace, developing an insatiable appetite for good food, wine, and gossip. He later accompanies the Pharaoh on a trip through his kingdom, all the while renewing the Pharaoh’s ability to enjoy life and inspiring him to become a stronger leader.
Between the cat and the Pharaoh a bond of love gradually forms which will determine Egypt's destiny.

The Pharaoh's Cat imaginatively blends Egyptology with comedy, drama, and even time travel--the cat and the High Priest will meet Elena, a resident of the twenty-first century and the daughter of a renowned Egyptologist.

A few things that impressed...
...a talking cat!
Well who wouldn't be impressed by that?  Seriously though, Wrappen-Hamen was a great specimen of a cat.  He was funny, witty, giving with his heart, and easy to please.  The love he had for the Pharaoh was like that of a brother; they brought out the best in each other though not even of the same species.  He was also quite the unintentional troublemaker...killing off the royal crocodile, popping the Vizier in the head with the butt cork of a hippo (it's not dirty like it sounds), and several other HI-larious moments.

...Egyptian history galore!
It's not so often you get an edutainment title from the Young Adult genre; it's usually strictly one or the other.  Here, we get a glimpse of life from ancient times.  The glitz and glamour, the rivalries and quests for power...gee, doesn't sound that far off from today's world expect for the dress code now does it?

...the emotional depth expressed!
Yes, indeed.  Despite the lead being a cat, the feelings shown were strong and utterly believable.  The love between him and the Pharaoh.  The friendship between him and the High Priest.  The awe and wonder when Bastet appears to him.  (...him in all these cases being Wrappa-Hamen...)  The mischievious rumbles of laughter rippling from throat to belly as the bull chased a certain enemy.  The sadness when death claimed someone near and dear.  All these and more emote right off the page with ease.

A few things that confused...
...a talking cat!  Deja vu much?
Just kidding.  It wasn't actually the cat talking that stuck in my caw but what he said or rather the language he used.  For a newly talking cat, he was pretty advance.  Perhaps it could be explained by his exposure to humans as a whole and that he's a quick learner, but the frequency that the word "a**" was used, felt off.  I know it's not a bad word or off limits per se, but for a story that for the most part fit the targeted Young Adult audience it was seeking, it didn't sit well with me.

...time travel!
Latter in the story, it plays a prominent feature in getting them out of some MAJOR trouble...for a while at least.  Though I was glad for the escape (and what they uncovered!), the believability of landing in modern day New York even if it was in the house of Egyptian scholars, just seemed a bit of a stretch.

Let's call it a wrap (as in mummy)!
It's a unique story you definitely won't find every day.  You'll laugh, you'll cry, you'll find yourself researching the myths mentioned and beyond.  The creativity used to bring this story to the page is certainly not lost on this reader, nor do I believe it will be on you.  Recommended read for teens and beyond. 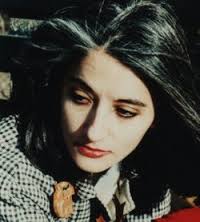 Maria Luisa Lang was born in Rome, Italy, and lives in New York City. She has a degree in art from the City University of New York, and her artwork has been exhibited in New York galleries.

She often returns to Italy to visit her family. She has also stayed for extended periods in Bath and London. She loves all animals and is an amateur Egyptologist. Her love of cats and ancient Egypt inspired her to write two novels about them. The Pharaoh's Cat is her first novel. She has almost completed its sequel, The Lady of Mystery. 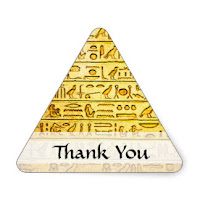 Special thanks to the author for the copy for review.  (THANKS!)  For more information on this title, the author, or the forthcoming sequel, feel free to click through the links provided above.  This title is available now in print and ebook forms, so be on the lookout for it at an online retailer of your choosing.

Great review. Whilst I did enjoy this book I did have some reservations.

A talking cat? That would be a little weird!