As I type this post, I feel like a character in my own fairy tale...and not the good kind.  Think Dorothy as she was whisked away to Oz.  Yeah.  Let's just say that we're having a little MORE than bad weather at the moment but rest assured the family and I are finally safe and sound at home.  While I wait out the Tornado Warning, I shall don my red shoes while keeping my pups close at hand (hehe) and spin you a tale of a book that should be a MUST READ on your wish list.  Why the wish list?  Easy!  It's not out yet.  *smirk*  It's scheduled book birthday is April 12, 2016 via Alfred A. Knopf and having just finished reading my ARC, allow me to illuminate just why this is the book for you.  Ladies and gents, Kid Lit fans of all ages, hold on to the fairy tales you've been told because they're about to get shaken, not stirred.  Today's blog tour guest and book of choice is... 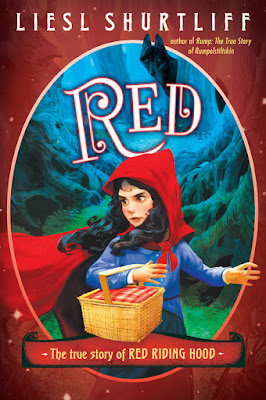 About the book...
Red is not afraid of the big bad wolf. She’s not afraid of anything . . . except magic.But when Red’s granny falls ill, it seems that only magic can save her, and fearless Red is forced to confront her one weakness.With the help of a blond, porridge-sampling nuisance called Goldie, Red goes on a quest to cure Granny. Her journey takes her through dwarves’ caverns to a haunted well and a beast’s castle. All the while, Red and Goldie are followed by a wolf and a huntsman—two mortal enemies who seek the girls’ help to defeat each other. And one of them just might have the magical solution Red is looking for. . . . 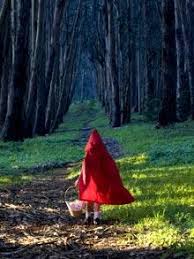 Say what you will but fairytale redos can be utterly amazing and this one falls right into that category feet first.

Here we have Little Red Riding Hood staying with her Granny while her parents are away but what's this? Granny's sick!  *gasp* No problem as Granny also happens to be a witch so a bit of her cure-all will save the day...if she had any left or the energy to make more.  Oh.  So THAT'S where the problem comes in.  Red is forced by circumstances to take things into her own hands and despite her hesitation in using her own magic, will have to find the power within herself to accept the things she cannot change, embrace life for all that it's worth, and let go of her fears.  It's a hard task but if anyone is up to the challenge, it's Red.  She's a force to be reckoned with and so are the merry band of friends and foes she makes along the way.  From Borlen the grumpy dwarf (not THE grumpy, but a grumpy fellow for somewhat good reasons) to Goldie the girl who doesn't value the beauty of silence (and yes, she's THAT Goldie with the locks to prove it), Beauty to the Beast, Wolf to the Huntsman, there's a formidable cast and many a tale to weave into the story but it does so so seamlessly that it feels almost like MAGIC.

I applaud the author for putting pen to paper and owning the challenge of how to put all these characters together in a way that makes sense and doesn't come out like that unfortunate movie, Into the Woods.  *shudders*  Sorry, but that just wasn't a well done concept but this...THIS truly is!  It's not just that she introduces characters from other tales but she has them recognizable beyond their name and in roles that both suit and stretch their limits.  Goldie was much more of a chatterbox than I would have guessed and watching her play out her "too this, too that, just perfect" routine within the dwarf dwelling was a humorous moment.  The Wolf was not what I expected in a GOOD way, though I must admit I was sad at how that connection ended.  It was right, but still sad.  The Huntsman isn't exactly the bumbling old dodger we believe, the Beast is closer to Beauty than you might think, and Granny it's just the Witch of the Woods.  So many secrets to uncover, and STILL an adventure to pursue all its own.

In the end, I thoroughly enjoyed my time on Red's path and highly recommend it to Middle Grade readers of all ages.  It's high time we see Red with a little more gumption, a little more power than simply a basket of goodies and kindness to spare.  Now, my fair readers, if you'll join me as we welcome a special GUEST POST penned by the author of this work.  I was tasked with submitting a topic suggestion and I thought, fairy tales....why not!  So here you go!  From me to her to you, the author's TOP 5 FAIRYTALES AND WHY she loves 'em. 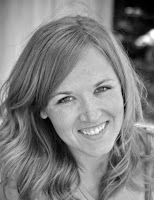 Liesl grew up in Salt Lake City, Utah, and has spent many magical days and nights in the woods. For better or worse, she has never come in contact with a wolf. Before she became a writer, Liesl graduated from Brigham Young University with a degree in music, dance, and theater. Her first book, Rump: The True Story of Rumpelstiltskin, was named to nine state award lists and won an IRA Children’s Book Award, as well as earning a starred review from Kirkus, proclaiming it “as good as gold.” Her second book, Jack: The True Story of Jack and the Beanstalk, was also a hit with both critics and kids. She lives in Chicago with her family, where she continues to spin fairy tales.

Special thanks to Cassie at Random House Children's Books for the ARC and chance to bring this tour to you.  (THANKS!)  For more information on this title, the author, or the publisher, feel free to click through the links provided above.  This title is set to hit bookstore shelves APRIL 12, 2016, so mark your calendar or pre-order it for your convenience.  In the mean time, be sure to check out the rest of the stops on the tour for some fairy tale fun! 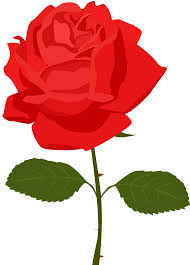 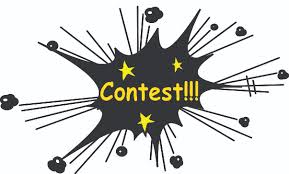 BEFORE YOU GO....
....would you like a chance to WIN A FINISHED COPY OF THIS BOOK?  I thought so.  Just CLICK HERE to enter the tour wide contest for your chance to win.

Ooh! I love fairy tale retellings. They're so much fun! (And the kids love them too.)