To the Rescue: Garrett Morgan Underground by Monica Kulling

Today, we're continuing along the same vein of things as yesterday's Ordinary People Change the World blog tour with a review of the latest addition to ANOTHER fabulous Children's Edutainment Storybook series.  It comes to us from an author whose work has been featured right here many a time before and hopefully many times to come.  She always brings a certain spark to her titles and manages to convey the information in such a way that readers of all ages are perceptive to the message.  It's a perfect fit after yesterday's post and a great match for Black History month which we are just at the start of.  Well now, enough with the suspense, let's get to it and do it!  Today's book of choice is... 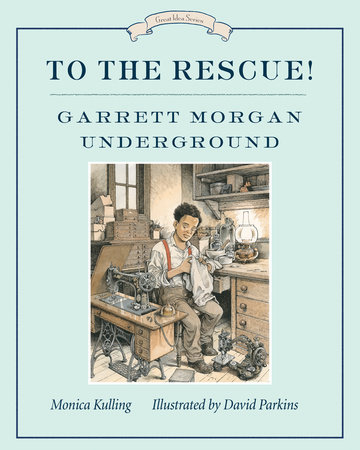 About the book...
The son of freed slaves, Garrett Morgan was determined to have a better life than laboring in the Kentucky fields with his parents and ten siblings. He began by sweeping floors in a clothing factory in Cleveland, Ohio, where he decided to invent a stronger belt for sewing machines. When he was promoted to sewing-machine repairman, Garrett was on his way. In 1911, 146 workers died in the shocking Triangle Shirtwaist Factory fire in New York City, so Garrett decided to invent a safety hood for firefighters. Little did he know that most people wouldn't be interested in buying his safety hood when they discovered its inventor was black. But an explosion that trapped workers in a tunnel under Lake Erie soon changed all that. Garrett's hoods were rushed to the scene and used to rescue as many men as possible. Developed further, Garrett's invention came to save thousands of soldiers from chlorine gas in the trenches of World War I.

A fascinating look at the life of a man whose work we take for granted yet never knew the mind behind.  That's what I LOVE about the Great Ideas series.  Every installment brings to light something everyday that we may not even look twice at, turns it inside out, and brings to the forefront the person or persons we have to thank for their creative genius.  In this case, it is one Garrett Morgan.

Now, admittedly when I first saw the title of this one combined with the imagery on both the front and back covers, I thought it had something to to with a little known member of the Underground Railroad.  Whoops!  I suppose I should have noticed the sewing machine odds and ends laying about but what can I say, I glanced quickly and I WAS viewing it on my phone so tiny picture = my mistake.  Once I had it in my hot little hands, I realized the "error of my ways" and dove right in to discover what this man's life was REALLY all about.

From his notice of things that could be made stronger so they were more efficient to the inventor's mind that lived inside of him, both combined to create a very remarkable life.  True, it wasn't easy going for him, as African Americans were just beginning to be accepted as free let alone businessmen, but that doesn't mean he gave up.  If he had, we wouldn't have hair refiner (straightens out the curliest of hair), modern day gas masks (the original format/idea came to him from watching elephants!), or even the traffic signal as we know it today.  Surprised?  I told you this series was good...

All in all, a great addition to any reader's library from the tall to the small, the home to the classroom, or anywhere in-between.  The informative nature of the story combined with the detailed illustrations that cover every page add up to an edutainment experience not to be missed.  If you haven't checked out this series as of yet, I highly suggest you do as it keeps growing and growing and growing and...well, you get the idea.  ^_^

Monica Kulling was born in Vancouver, British Columbia. She received a BA in creative writing from the University of Victoria. Monica Kulling has published twenty-six fiction and nonfiction books for children, including picture books, poetry, and biographies. She is best known for introducing biography to children just learning to read and has written about Harriet Tubman, Houdini, Eleanor Roosevelt, and Amelia Earhart among others. Monica Kulling lives in Toronto, Canada.

Special thanks to author Monica Kulling and the team at Tundra Books for the review copy.  (THANKS!)  For more information on this title, the Great Ideas series, the author, the illustrator, or the publisher, feel free to click through the links provided above.  This title just celebrated its BOOK BIRTHDAY last month via Tundra Books, an imprint of Penguin Random House Canada, so be on the lookout for it on a bookstore shelf or virtual retailer of your choosing.