Hi there!
Welcome back to the site that aims to satisfy the reader in you, Satisfaction for Insatiable Readers.

Today, we're taking a look between the epages of a Fantasy novella fit for the young adult crowd and beyond.  It comes to us from a new-to-me author that's gearing up for the release of her first full length Fantasy novel this summer (Heroes for Hire: Discount Prices) and if I may be so bold, I think this was a wonderful stepping stone into her writing world.  So without further adieu and to keep my review shorter than the book, I give you today's ebook of choice... 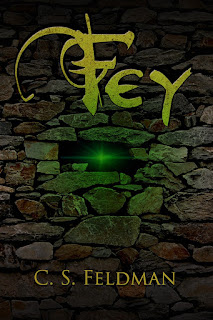 About the book...
Nessa Donnelly never expected to see her estranged and eccentric father again, but a phone call summons her back to her hometown and to the hospital in which the elder Donnelly lies in a comatose state for which his doctors have no explanation. Bit by bit, long-buried family secrets emerge, and Nessa begins to realize that those secrets were kept hidden from her for a reason.

She also realizes that there is something in the woods behind her father’s house that he never told her about, something that can’t be explained.

Short stories are generally my nemesis.  You have enough story to begin to get into things but not enough pages for anything to fully flesh out.  It's a double edge sword if ever there was one.  This one though can be counted among the few that pass into my "loved-it-now-if-you-could-please-give-me-more" category.  Allow me to illuminate why....

Nessa is a complex character and we really only get to know her on a surface level due to time and space.  Is it enough to love her?  Certainly...but I'd also love to explore her relationship with Matt, her past with her family, and see just what else might transpire should she make it through the trials she is about to unwittingly undertake.  The mysterious wall in the woods that (seemingly) supports nothing, (seemingly) connects to nothing, and (seemingly) serves no purpose also has a history and I'm quite certain many more stories to tell for better or worse of those on both sides.  Mr. Donnelly is rather underrepresented by his own self here (with good reason), but to see him as he raises his children, connecting with the brother while protecting the daughter, forging walls for others while continuing to maintain the integrity of the one that seems illogical in his own backyard, those are the things that the story leaves me wondering.

So, did I enjoy my time between the epages?  Certainly!  The mysterious green eyes were alluring and creepy all at once. The secrets they kept and the promises they made added to your uncertainty about their intent.  The creature hiding in her family home left one perplexed as to whose side it was on, and what it was seeking in the first place.  The initial reason for her being called home was curious but upon her arrival turned concerning.  The future for Nessa and her secret were bleak and with time running out you were left on the edge of your seat wondering if she'd pull it off.  The mix of fantasy, lore, and reality were solid, making the story approachable for more than one genre fan.  So yes, I'd say I rather enjoyed my time and consider it well spent.  Could I have used MORE time with them to gather their personal histories, backstory, and the like?  Yes indeed....perhaps the author will grant readers this wish someday in a future release.
*fingers crossed*

Recommended for Young Adult and Fantasy fans alike.  There's magic, mystery, life and death circumstances, and tricky creatures to say the least.  To say more would require a trade on your part and if I learned anything from the "green eyes", trades rarely come at a fair price.

Special thanks to author C.S. Feldman for the ebook for review.  (THANKS!)  For more information on this title, the author, her other works, or those still to come, feel free to click through the links provided above.  This title is available now, so be on the lookout for it at your favorite ebook retailers.

I usually avoid reading short stories for the same reason! It almost feels like a waste of time if you aren't going to get the world building and the back story. But it sounds like this one was pretty good. Glad you enjoyed it!

Thanks very much for the review, Gina! :) Please forgive the late posting--my husband and I have been in the throes of trying to fix up our kitchen for the past several weeks, and I'm not firing on all cylinders lately… I'm so glad you found Fey to be a worthwhile read!