Today, we're joining a blog tour already in progress that stars a COMING SOON (as in tomorrow) title from the folks over at Random House Children's Books.  It's an oddly titled sequel to the unusually titled initial release and the story...well, it has its oddities as well.  We're talking deathdates, cheating the reaper, outrunning the DIA (aka the Death Investigation Agency), and dealing with close kept family secrets that would blow your mind.  Interested?  Good!  Let's get to it.  Today's blog tour guest and book of choice is on deck... 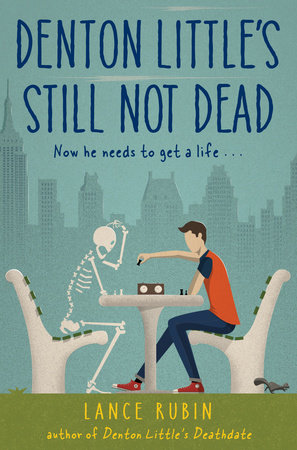 About the book...
You only live once—unless you’re Denton Little!
Denton Little lives in a world exactly like our own except that everyone knows the day on which they will die. The good news: Denton has lived through his deathdate. Yay! The bad news: He’s being chased by the DIA (Death Investigation Agency), he can never see his family again, and he may now die anytime. Huh. Cheating death isn’t quite as awesome as Denton would have thought. . . .

Lance Rubin’s debut novel, Denton Little’s Deathdate, showed readers just how funny and poignant imminent death could be. Now in this sequel, he takes on the big questions about life. How do we cope, knowing we could die at any time? Would you save someone from dying even if they were a horrible person? Is it wrong to kiss the girl your best friend is crushing on if she’s really into you instead? What if she’s wearing bacon lip gloss?

So...you know that age old question about whether a book within a series can be read as a stand alone?  You know how many times it's sort of a gray area, where it can go either way and you'd still be fine?  Yeah...I'm voting for a no on this one.  I think I would have enjoyed it more so if I wasn't playing catch up during the first third of the book.  Just saying...reader be warned...but then again, how many of you have shied away from reading MORE books, am I right?  ^-^  Anywho...

Things start off pretty hot and heavy...no, not like THAT....I just mean that we're right in the action, things are happening, lives are changing...even those that aren't suppose to actually be existing anymore.  We are immediately intro'd to Denton Little, furthermore to be known as Frank Big, but umm, yeah...still going to call him Denton.  He's the man (teen) with a plan...mostly.  You see, he's outlived his deathdate (that magical date the government has mandated everyone know -- unless they are "undated" on a genetic level) and if he can do it, so can his best friends, right?  Umm, about that.  That whole "world is his oyster" thing...so not what he thought.

Apparently, outliving one's supposed day of dying isn't all it's cracked up to be for many reasons.  First, you can no longer live your old life because hey, everyone thinks you're dead!  Second, you have to take on a new persona if you even want to consider doing something other than say hiding out in your supposedly dead mother's apartment and being tested like a lab rat.  Third, you have to stay two steps ahead of the DIA, which judging from Denton's past, is pretty much an impossibility (or his luck is just REALLY bad).  With all these rules looming over his head, how is he suppose to have any semblance of a life now?  I mean, what was the point in "cheating death" if he can only exist?  Good question, and just one of many that he's going to pose, ponder, and break through by the seat of his pants because hey...what else would a teenage boy do when presented with "you can't do that" from all the adults in residence?  Exactly.  Things are about to get out of hand on a HUGE level, but if you know Denton Little at all, you know he won't take it lying down (get it?  Because he's alive, not... ^-^)

All in all, an original read for certain.  Can't say that I've read a book quite like it before, and the concepts explored are certainly things that provoke thought.  I mean, would you REALLY want to know when your expiration date was?  Would it help anything?  Would you be a better person, live faster, try harder, or just put a particular finger in the air like you just don't care?  So many WHAT IFs, so many possibilities, and of course there's the whole choice of knowing versus "you have to know".  Some may be better for it, while others depressed by it.  I have to applaud the steps Denton and Paolo take towards helping their generation own their rights.  It was truly stellar.  Oh and Millie...you go girl!

Lance Rubin is the author of Denton Little’s Deathdate. He’s worked as an actor and written sketch comedy, including successful runs of The Lance and Ray Show at the Upright Citizens Brigade Theatre in New York City. He’s also co-written a new musical called Broadway Bounty Hunter. Lance lives in Brooklyn with his wife and son. He is very glad he doesn’t know his deathdate.

Special thanks to Allison at Random House Children's Books for the copy for review as well as the chance to participate in this tour.  (THANKS!)  For more information on this title, the author, or the publisher, feel free to click through the links provided above.  This title is set to hit bookstore and virtual shelves TOMORROW (02/07/17, as of this post), so be on the lookout for it at your favorite retail stores.