Go with the current...

Hi there!
Welcome back to Satisfaction for Insatiable Readers…the place you can always count on to have something fresh and new to start your day in a bookish sort of way.

Today…well, it’s already been one of “those” days and it hasn’t even reached the halfway mark (though it will have once this post goes live).  The bad day vibes are being fended off rather successfully though so I thought, why not push through all the crazy and get a review up for the day?  I pulled the book I was reviewing, gathered my notes and emails, and…discovered it was a title that I actually wasn’t scheduled to review for another month or two. Whoops…on my part (which totally explains why my reading schedule was so scrunched this month), but YAY on your part because you get to read all about this book all the earlier.

We’re all over the board recently with the Young Adult series feature last week, and the Fiction contest running this week, but hey…that’s just how I roll.  (…and you KNOW you love me for it… ^_^)  Today, we’re stepping back to a Children’s Fiction selection, Middle Grade to be precise (though older readers will enjoy it was well), that incorporates a little magic, a little wonder, and a whole lot of mystery that plays out both above AND below the sea.  Grab your goggles and your fins, you’re gonna need them….might wanna bring that underwater flashlight over there too.  Today’s featured book of choice is… 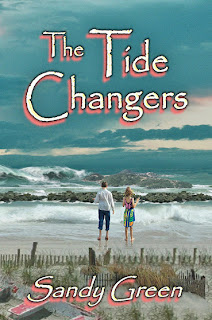 The Tide Changers
By
Sandy Green

For a thirteen-year-old kid who lives right by the ocean, Ford Kahr has never been a great swimmer. In fact, he sinks like a rock in the water. He's actually afraid to swim in the ocean after his dad, a marine biologist and experienced scuba diver, disappeared off the shore of their hotel in , three years ago.

As klutzy as Ford is in the water, his older brother Jag is a junior swimming champ, and his younger sister Mercedes has a mystical connection to the water that Ford can't explain. But when Jag swims out to investigate the disappearing island past the jetty, Ford uncovers an amazing secret that puts a new spin on his relationship with the ocean. The ocean harbors a whole other world beneath its surface that Mercy and Ford must explore - hoping they'll find some clue to the disappearance of their father and the astonishing secret they share about the water.

Legends of underwater people and stories of scary sea monsters push Ford and his sister to discover the truth about what's really out there in the ocean depths.

The mystery is stated there, plain for all to see.  The father of this family has disappeared some time ago and the only clue left behind that things may not have ended well was a dive watch discovered in the belly of a shark.  *-*  Ominous, right?  Surely that would be enough to let them know that his plans went a bit…south; but no, as with most families, the children refuse to believe what’s before their eyes.  Good for them because you know what?  Though we’ve no proof to the contrary (yet), they may just be right. 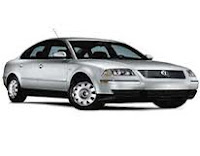 A rather unexpected read, this book deals with everything from the loss (maybe) of a family member to mysterious creatures under the sea (no, not mermaids exactly…), allowing it to take you on a journey beyond coral and into the stars…literally.  (Nope…I’m mum about how that figures in…^_^)  The three kiddos here are Jag (the swim star), Ford (the middle child and good kid, mostly), and Mercy (the youngest and only girl of the trio).  If you hadn’t noticed…yes, they are all named after cars, kinda ironic when their last name IS Kahr (pronounced C-A-R) though I’m sure they would disagree; call it an inside family joke.  Ford is the one who receives the spotlight in this story and he’s a great kid with the best of intentions, but Mercy is the one that steals the show.

Mercy is a special little girl; first in being the only daughter, and second due to her medical conditions.  She has to have a regular schedule or she gets flummoxed.  She takes medication with her snacks frequently.  She needs (though often doesn’t wear) a special shoe to help make walking a bit easier.  But in the water…the glorious water…she is FREE.  Free from all that is weighing her down on land.  Free to swim and play as good as anyone else (or at times even better!).  Free to just…BE Mercy.  It’s wonderful to see her gain her sea legs so to speak and really open up to the world around her and in doing so, embark on an adventure that’s been waiting JUST for her. 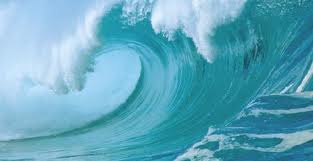 The two siblings rely on each other very much, a nice break from the usual “at-each-others-throats” version we normally see (though Jag fills that role by himself), so when one gets into trouble, the other is sure to follow.  Mercy falls into the clutches of …an evil minded someone not of our planet (thought you could fool me into telling you who, didn’t you?) that has their eye on taking over our world as their own.  It’s not a simple conquest thing though as in move-over-here-I-come; in order for them to rule the land, the sea needs to displace or rather replace it…hence the book title.  Things get rough but these two are much tougher than they appear…especially when an unexpected alliance and the finding of something (*ahem* or someone *ahem*) puts the odds ever so slightly in their favor.

By book’s end, you’ll have rooted for the good guys, faced down some wicked bad guys and discovered that although things are not always what they seem, where there’s a will (or Ford or Mercy) there’s a way.  A great summer read for middle grade readers and beyond.  The sea holds many mysteries, but it also holds some fascinating treasures…and I wouldn’t be surprised if it entices young ones to explore the world right below their fins.  What they discover may not be shape shifters and energy harnessing machines, but it will amaze all the same and who knows…it may even awaken the oceanographer in them! 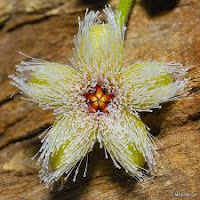 Review copy received courtesy of author Sandy Green.  (THANKS!)  For more information on this title as well as the author’s current happenings, feel free to visit her online, check out her blog, like her Facebook, or follow along on Twitter.  This book was released December 2011 via Penumbra Publishing, so be on the lookout for it on a bookstore shelf near you!  Can’t wait run out to the store just now?  Here’s a link or two to get you started online…Amazon…Penumbra Publishing.

Now, I’m off to see if I can figure out how to grow some of my own seastar flowers because I’m jonesing for a mango pineapple smoothie right about now….

Until next time…happy reading!
Posted by Gina at 12:56 PM

Wow that sounds like a wonderful read, full of everything one could go through as a family. Wonderful review.

Melissa: Yes...a surprise but in a good way!

Petty Witter: Have to agree...and it's at a level that middle grade readers can dive into too.