Hope has many forms...

Welcome back to the late night edition of Satisfaction for Insatiable Readers….the place you can depend on to be bookishly quirky any day of the week. Okay, so it may not actually be late night for YOU, but for me….it’s getting close to the end of the day (both hour wise AND time-for-bed wise…*yawn*), but I couldn’t let this week end without a final post that fit the healing and hope theme of the week.

Today’s addition to the week of reviews was a book I read last year that just never quite made its debut on the site. No, I wasn’t hiding it from you….for one reason or another it just never surfaced, until today. It’s another true life tail….forgive me, tale….that takes us to the front lines of tragedy and loss but places us gently into the hands of hope and a better tomorrow by story’s end. Without further ado, today’s book of choice is… 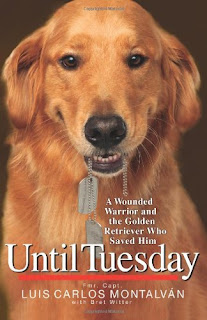 
A highly decorated captain in the U.S. Army, Luis Montalván never backed down from a challenge during his two tours of duty in Iraq. After returning home from combat, however, his physical wounds and crippling post-traumatic stress disorder began to take their toll. He wondered if he would ever recover.

Then Luis met Tuesday, a sensitive golden retriever trained to assist the disabled. Tuesday had lived among prisoners and at a home for troubled boys, and he found it difficult to trust in or connect with a human being—until Luis.

Until Tuesday is the story of how two wounded warriors, who had given so much and suffered the consequences, found salvation in each other. It is a story about war and peace, injury and recovery, psychological wounds and spiritual restoration. But more than that, it is a story about the love between a man and dog, and how, together, they healed each other’s souls.


This was a touching story in many ways and yet so hard to explain to another person. Have you ever had that trouble with a memoir? I have. I think it’s because it’s a personal story already that the journey you take into their lives is also personal thus making every reader’s experience just a bit different. It’s like if you witness a historic event. If you interviewed everyone there, you’d have 50 different sides to ONE story. It’s not because they didn’t all see the same events, it’s because their focus was on different things. Whether the stress in their lives had them mentally sorting out problems from the day, the pain in their bodies nagging at them to pay a visit to the doctor’s office, the children at their side needing 12 dozen cupcakes for tomorrow’s bake sale…..anything and everything plays a role in what we see, what we experience, hence my take on this book. 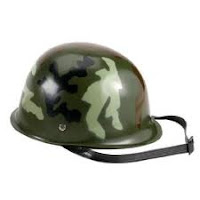 First things first, Tuesday’s picture on the front is definitely an attention grabber. I’ve said it once and I’ll say it again, there is something about the friendly mug of a Golden Retriever that gets me every time and this little beauty just shines off the page. Stepping into the book, we aren’t greeted with fur babies and paw shaking fun….we’re greeted by war and tragedy. Luis Carlos Montalvan is the “star” of this show and the hero of the hour having taken two tours of duty in Iraq whilst serving out country. The first time was out of need and duty as many young men and women experience; the second was partially that but also self serving. How so? You see upon his return he was already experiencing side effects of having seen too much making everyday life a bit of a challenge. The second tour and an injury later, he wasn’t much better off….in fact, he was worse. Thank goodness for second chances.

His second chance came on four legs with a golden mane but with mental injuries of his own. You see our future pal Tuesday was trained to assist others, but was handed off one too many times during his schooling thereby making his ability to trust others and form that necessary bond a bit of a challenge. Good thing soldiers like a challenge. Though not the most perfect match up from the start, in the end they were each others “saviors” bringing out the best and saving them from their worst. Many times Tuesday was able to sense an oncoming moment of weakness for the former Captain allowing him to get to a safe place or position before trouble struck. Just as many times, Tuesday’s lacks daisy attitude in some areas of his training regimen should have ended his ability to be eligible for the program but with Luis’s help, he got back on track. It’s amazing to see their bond go from simply needed companion to friendship to love. It just goes to show you the healing power that exists in all of us if only we’re able to look deep enough within.

In summary, a memoir featuring both man and man’s best friend. Though they start out on two separate paths, the convergence of their lives is something to behold even if not through experiences we would wish upon our worst enemies. You’ll see through the eyes of a soldier, potentially good men at their worst; through the eyes of dog, potentially bad men showing their best. The patience and understanding these two have shown each other in order to reach the relationship they have now is heart warming and, forgive for throwing this word out there again this week, full of HOPE. Hang On Pain Ends….a worthwhile use of the letters in such a short yet inspiring word and an explanation that says so much with so little.

ARC for review won via Shelf Awareness from Hyperion. If you haven’t subscribed to the Shelf Awareness newsletter as of yet, I highly suggest you do….and it’s easy peasy with the widget located in my left side bar! ^_^ Whether reader or bookseller, you’ll be kept up to date on the latest and greatest in bookish news…and given a chance to win now and then too. To discover more about this title as well as the complete Hyperion Books catalog, be sure to check out their website, like them on Facebook, pin them on Pinterest, friend them on Google+, or follow along on Twitter. This book was just released in paperback last month so be on the lookout on a bookstore shelf near you.

To learn more about this endearing pair, Fmr. Capt. Luis Carlos Montalvan and his pal Tuesday can be found online, on Facebook, and of course, on Twitter.

Oh I so badly want to read this book! The cover alone has sucked me in just like you wrote. I love stories about animals, always so inspiring!

this book sounds amazing. i actually have a copy on my shelf waiting to be read.

Ahhh...love the cover for this one! I can see why you'd want to pick it up.

I have the same problem with reading memoirs. They're such a personal experience that it's almost difficult to explain how it connected with you because it may be completely different for someone else. This one sounds like it was a wonderful read though. Fabulous review!