Hi there!
Welcome back to Satisfaction for Insatiable Readers…the place to be every day of the week for good times, fair weather and of course, great reads.

Today, we’re taking a look at a title via Pajama Press.  It’s from the Young Adult genre, steeped in history but only so far as to reach out and connect you directly with a time, place and person…not so much as to feel preachy, teachy, or any other word you’d care to add a “y” to that fits.  (^_^)  Of course, it also opens up the avenue of further investigation for you since it has real life connections, but we’ll get to that a little later.  Ready to greet today’s featured title?  Practice your curtsey and your bow, today’s book of choice is… 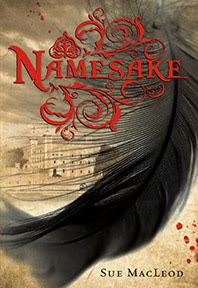 Look familiar?  Well, it darn well better…or else you haven’t been visiting the blog these past few months and then, and then I might just have to cry.  *sad face*  You don’t want me to burst out in tears now do you?  *sniff*  I didn’t think so.  *blows nose*  Besides, it wouldn’t be nearly as much fun as sharing my thoughts on this book because honestly, it SURPRISED me.

Okay, I admit it. When I hosted a spot on the blog tour back in September, I initially had my wires crossed.  I thought I was to review it for my day instead it turned out I was spotlighting it and so in my whole rush to read it before the supposed deadline that was about to pass…I was just NOT into it.  I couldn’t connect, no if’s, an’s, or but’s about it.  Turns out the reason was simply because I was too rushed.  Once my reading schedule kink was worked out (i.e. I read my own sticky note on the cover of the book…*hand to face*), I put it aside until its proper time and thus discovered a book much more fascinating than my first pass revealed.

This is the story of Jane Grey…and Jane Grey.  The only thing separating them is the inclusion of the name/title “Lady” and a couple of centuries.  No big deal, right?  Umm…well, here’s the thing.  JG from the here and now lives in Canada, crushes on TK (Tom Kantor), and has a history report coming up that she is doing on LJG.  Convenient considering the events that are about to unfold…plus of course the same name aspect.  LJG from the past was the teen ruler of Tudor England for about nine days…before she was imprisoned and executed.  Dun dun dunnnnn.  Her Booke of Prayre seems to have survived her beheading (~shudders~) and finds its way into the hands of our current JG with very unexpected results; for it’s not just a first hand account of LJG’s days, but a portal of sorts…or so it seems.  I mean, come on!  Do you really expect us to believe that she’s traveling back to the final days of the young ruler’s life, playing chess, dancing, and trying to find some way to stay her execution?  Pfft!  *chuckles*  Oh wait…unless the way there and back works BOTH ways…   ~oooh~

Curiosity may have injured the cat, but revealing the final plot line has off’ed enough readers and reviewers for me to know better than to spoil the mystery.  Suffice it to say, you’ll grow close to both young ladies as they explore each other’s lives in the here and there.  You’ll grow to understand both their positions and the choices they make regarding their own fates.  You’ll realize that it’s not just a history project in the making nor a chance to see life as it once was, but a story that reminds us that EVERYONE has difficult times in life; some struggles just aren’t as obvious to Johnny Q. Public.  It doesn’t make them any lesser or greater, it just makes them as tough to manage on your own.  You have to let others in for help to be lent; after all, not everyone is as discerning of the pains we have grown so accustom to hiding.  Share your true self with the world, the good and the bad.  Let them make their decisions regarding you with the whole picture in front of them…just don’t let their “judgment” determine your self worth.

Recommended read for Young Adult fans of all ages and beyond.  Whether historical read inclined or not, there’s still something to connect with and reflect on in this story.  Review copy received courtesy of Pajama Press.  (THANKS!)  For more information on this title as well as their full catalog, be sure to stop by their official site, pin them on Pinterest, friend them on Facebook, or follow along on Twitter.  Oh…and one more thing.  Seeing as how a lot of the events included actually happened, I do believe you’d be interested in knowing that the ‘Booke of Prayre’ mentioned actually exists…or at least the one widely accepted to have been hers does.  Thanks to the author’s note, we’ve got a lead on where to find it.  Just click here and then search for “Lady Jane Grey’s prayer book”.  (*types…clicks…reads*)