Hello!
Welcome friends to the site that reaches over the rainbow to pull out the bookish good in each day just for YOU…Satisfaction for Insatiable Readers.

So, how much do you know about your family history?  Can you trace your roots back generations upon generations or is your family tree a little more spotty?  Are you perchance named for someone in your family or is your name as unique as the nose on your face (no pun intended)?  Or perhaps though you are unique (because you totally are), your uniqueness isn’t simply NAME deep.  Perhaps it’s what’s inside of you, that thing that makes you, YOU and the discovery of a connection name wise is just a mystery waiting to be solved.  Welcome to Andi’s world!  Today’s book of choice is… 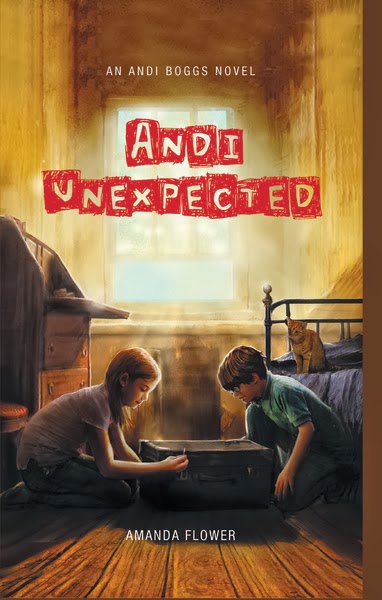 After the sudden death of their parents in the jungles of Central America, twelve-year-old science geek Andora “Andi” Boggs and her diva teenaged sister, Bethany, move to rural Killdeer, Ohio to live with their eccentric twenty-something aunt. And while the timeworn house has been home to the Boggs family for generations, Andi feels far from at home. Exploring the attic in her grief, she discovers proof of another Andora Boggs in the family tree hidden in a Depression-era trunk. Despite the meddling of the citizens of Killdeer, Andi and her new friend, Colin Carter, are determined to find out who this first Andora was, how she vanished, and why no one in town wants to talk about her. As more and more unanswered questions pile up, Andi and Colin must decide who they can trust with their secrets and who is interested in Andora’s story for the wrong reasons.

Andora, aka Andi, was an endearing character....and not merely for her "sweet" nature either.  She was a nice girl, don't get me wrong, and she knew the difference between right and wrong (even if she DID stretch those limits a time or two...it WAS for the greater good!), but she was also tenacious, calculating, and a truth seeker to her core.  So, of course, upon uncovering the little mystery of the "first" Andora, she HAD to know the whole who, what, when, where, and why about it.  The thing is....she never anticipated the reach of the truths she might uncover, nor the lengths to which others would go to claim the info treasure trove as their own.  I'm sorry but making a name for oneself is rather overrated at times...especially when it's put over family.  Tisk tisk Mr. ....well, someone we meet in the story.  ^_^  *ahem*  Anyway....

The supporting cast is equally worthy of notice; from Bethany (her sister) to Colin (her next door neighbor and sidekick in "crime"), Mr. Finnigan (the museum curator) to Miss Addy (the lady of some years that knows everything there is to know about anything in Killdeer, OH).    The discoveries of not only connections, trusts and betrayals along the way but friendships AND enemies, both shock and delight as we're lead from days gone by into the here and now with ease.  Speaking of those transitions...

I'm not a big fan of Historical Fiction nor a frequent reader of Christian Fiction, and yet I did find myself intrigued by this combination of both.  Perhaps it was the lack of needing to have foreknowledge of the places and times that worked in my favor.  Maybe it was the light handedness used in including the messages from above within the work.  Or better still, it could be the author's talent combined with the fact that it's written for a Middle Grade audience that kept all elements in balance, allowing me (and many of you, I'm sure) to enjoy this read the way it was meant to be.  Oh and before you go thinking this is merely a glimpse into the past without any action or adventure to speak of, think again.  There is danger to be weary of, and the extent to which it is carried out does surprise.  So beware.... ~oooohhhhoooohhhh~  Just kidding, well, at least about the ghostly wail part there.

ARC for review courtesy of author Amanda Flower.  (THANKS!)  For more information on this title as well as her future works, be sure to stop by her site, check out her blog, like her on Facebook or follow along on Twitter.  This title was released via ZonderKidz, an imprint of HarperCollins so be on the lookout for it on a bookstore shelf near you.

Sounds intriguing! Unfortunately, I know who I was named after and there's no mystery what-so-ever. *pouts*