Hi guys!
Welcome back to another week here at Satisfaction for Insatiable Readers...the site that knows when to scream, when to shout and when to shake it all about.  ^_^

Today's featured title is one that will make you do all three of the actions mentioned above in a totally and absolutely GREAT way.  That's right!  It was DEFINITELY a winner in my book and I think it will be in yours too....however, before I go making snap judgments on your behalf, perhaps I should introduce the book first, no?  No...I mean yes!  Ladies and gents, readers of teen age and above, may I proudly introduce today's book of choice... 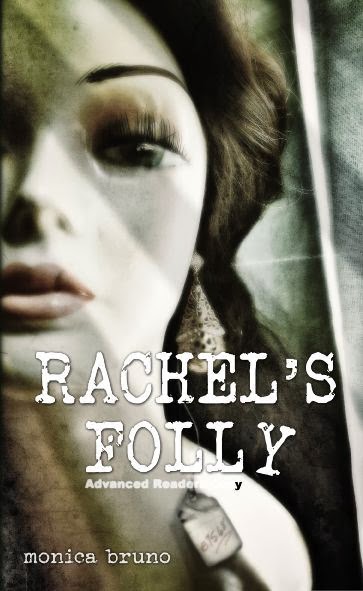 
Family therapist Rachel Richards’ life is about to come undone.
She has it all: a successful career, a beautiful house, a loving husband, and a son she adores. To top it off, her best friend is getting married. But who is this mysterious man who calls himself Jack and, more importantly, who is Rachel when she’s with him? After a night of drinking gone awry, Rachel is forced to face a dark part of herself she didn’t know existed. She must find a way to cope—with what she’s done, with the kind of person she might be—or lose her life in the process.
Told from three unique perspectives and set against the backdrop of an Austin, Texas both strange and familiar, Rachel’s Folly is an exploration of profound loss, morality, and the lengths to which we will go to save our loved ones and ourselves . . . from ourselves.

Yeah...did you catch that?
You know, the synopsis up there...did you actually read it?  If not, go back....I'll wait.  What's that?  Oh...you want to know why?  Well that's easy....because as of the time of this post, that's the most you're gonna find (besides word of mouth) about this little beauty online.  That's right.  It's top secret-ish at the moment, running incognito, behind the scenes....well, you catch my drift.  Anywho...the official launch of this book is scheduled for later this week, at last check January 9th you should find it online at the big "A", but YOU my lucky readers get to catch an inside glimpse at what awaits you.  Now, I am under strict orders not to include any spoilers, though that is my normal m.o. I will be especially dutiful this time around.  So, if my words seem a tad veiled, it's TOTALLY on purpose.  Okay?  Kay.  Let's jump into it then with both feet first and our eyes wide open because you're not gonna want to miss a minute....

Rachel is a great lead character.  She's genuinely a good person, but she's done something awful.  Is it something she should be condemned for, something she should let eat away at her for the rest of her life?  I'll have to let you be the judge but suffice it to say, it probably happens more often than not nowadays. Anywho, the terrible something affects more than just her.  It affects the lives and loves of those around her.  To reveal or not to reveal, that is the question.  Whether tis better to shed light on a bad choice and release all the guilt, or bury it deeper than the deepest ocean bed so as to not risk affecting the masses because after all, what good is being guilt free if you're all alone in every sense of the word?  Ahh...but what if things weren't exactly what they seem?

What if the idyllic life you pretend to live is just one of many facades?  What if those you thought you knew, you never really knew at all?  Hard to admit to yourself as a lay person, let alone someone who is suppose to help others uncover their true selves....like our friend Rachel, a therapist.  She works with people everyday that are searching for answers to this or that problem in their lives.  But tell you, who councils the therapist?  Family can sometimes help, in this case her brother Ben, but though their intentions are good, their choices don't always mirror our own whether we can admit that or not.  Case in point, Ben offers council somewhat reluctantly, but all it does is deepen his own guilt when events take a turn for the worst.  What events?  Oh no you don't...I'm not telling.  Nice try though.  Let's move along with the characters.

Ben is a great brother.  He's there for Rachel and her family, is genuinely into his nephew Jacob and has a little dog named Homer.  When times get tough, he's reachable by phone (normally...~whistles~) and can be counted on to lend a hand even from afar....and when things get a bit shady, from within the fire.  Keeping with the male end of the spectrum, we also have Edward, Rachel's husband.  Again with the great guy comment, but my only real beef with him is not believing more in Rachel.  I mean he had valid reasons not to after what happened is revealed, but to simply shut the door on a possibility because it's too hard...I don't know; it seemed less than noble.  Perhaps he was simply thinking of their little guy, Jacob.  Last on the male chain would be Jack, the new addition to their circle....we get to know him as the story progresses, until then, he seems like a cog that doesn't quite fit.

Story wise...there is action aplenty, morals explored, relationships tested, the three M's (that's murder, mayhem, and madness) and much much more all contained in just under 60,000 words and 250 pages.  Just goes to show you that it doesn't have to be a whopper of a book to be a GREAT read...and this my friends is just that.  From start to finish, this read was completed in about two days...and that's with working two jobs, so you do the math!  Oh, and one final note.  That cover?  That oddly unusual and yet drawing cover?  It's explained within the story so don't think too hard on it in the mean time.  I know, it'll be hard, but just wait.

In conclusion, a story you can really sink your teeth.  You come to know the characters, well....as good as anyone else....(~whistles~...I'm NOT spoiling it!)...while your heart tries to keep pace with the events as they unfold.  Recommended read for older teens and beyond due to one (maybe two?) intimate scenes and a bit of violence that while totally warranted may not be the best thing for younger eyes.  The grammar is spot on, the tale well written allowing the story to flow freely from page to page and viewpoint to viewpoint.  Make a spot on your wish list my friends and stay tuned to the online channels as this book makes its way into the Literary Suspense/Thriller arena.  I foresee it being quite a contender.

ARC received courtesy of author Monica Bruno.  (THANKS!)  For more information on this title as well as the mind behind it, seek thee out her official site, or follow along on Twitter.  This is the author's first novel, and I for one can't wait to see what else she has in store for us.

Ooh, I am intrigued. There really is nothing like top secret-ish and a good, spoiler free review like this to spark the imagination.