Blast from the Past: Chomp by Carl Hiaasen

Hi there!
Welcome back to Satisfaction for Insatiable Readers…the place to be when you’re in the mood for something to while the hours away, bookishly of course.

Today, we’re sampling another blast from my reading past with a title that released a year or two ago.  It’s a Children’s Fiction story from an author known both in this genre as well as General Fiction.  It’s been said he has a wicked sense of humor, an active imagination, a penchant for Florida locales and is pretty righteous with wielding the pen.  This being my first venture into his literary world, I have to say…I was not disappointed.  Ready to add a new pick to your wish list or perhaps even reminisce about an old favorite?  Let’s!  Today’s book of choice is… 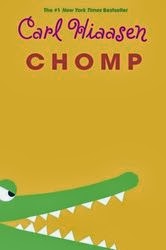 Wahoo Cray’s life is a zoo – literally.
His father, Mickey is a professional animal wrangler, so Wahoo’s backyard is crawling with gators, snakes, raccoons, monkeys, and turtles.  The critters, he can handle.  His dad is the unpredictable one.
When Mickey Cray takes a job with a reality-TV show called Expedition Survival!, Wahoo knows he’ll be doing some wrangling himself – to keep his father from strangling Derek Badger, the show’s outrageously inept and egotistical star.  The job gets off to a harrowing start when Derek stages a near-disastrous scene with Alice, the Drays’ gigantic gator.
Then things get even hairier after Derek, who foolishly believes his own PR, insists on using only wild animals in his stunts.
Meanwhile, Wahoo has acquired a shadow named Tuna – a girl who’s sporting a shiner courtesy of her father and needs a place to hide out.  Wahoo doesn’t know what else to do but bring her along on their Everglades adventure.
The TV crew is on location for barely a day before Derek gets chomped by a bat and goes missing in a storm.  Then, as search parties gather at the edge of the swamp, Tuna’s dad shows up waving a gun…
Will anyone survive Expedition Survival?

Think of this one as a mixture of Steve Irwin and Jeff Corwin, with middle grade leading man.  Well, come to think of it, Bindi did (or does?) have her own TV and book series, but she’ll represent the femme population.  Anywho…

Wahoo is hands down one of my favorite leading lads.  Why?  Well let’s see, for starters his name is amazing.  No, I wouldn’t name my son that (sorry Wahoo!) but he owns it and it fits him as well as his personality.  Then we have his nature.  For such a young boy, he is remarkably caring and his concern extends not just to his friends and family, but those in need, no matter if they are two, four, or more legged.  Speaking of the two-legged variety…our friend Tuna is a special gal too, though her life has been turbulent in far more dire ways than Wahoo’s; considering he basically lives in a wildlife rehabilitation center, that’s REALLY saying something.  Hey, give me an angry gator (not really) over a drinking, abusive human any day…or at least turn around so you can’t see what I’m about to do to that person.  *grr*  Let’s just say Tuna’s Dad is WAY less than worthy of the title.  Thank goodness Wahoo and his dad are there to lend a hand…even if things do get a wee more than dicey as the story moves along. 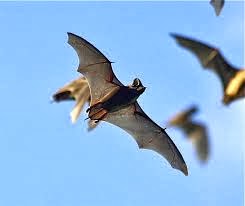 Rolling along with the river ripples, we would be negligent if we left out the team that is Extreme Survival…mainly shining the spotlight on Derek of course.  Who’s he?  Well, if you read the synopsis, you’d have at least a hint (^_^) but barring that, he’s the STAR of the show. You know, the main man, the top banana, the one who actually does all the survival practices that are showcased on his amazing show…or wait, maybe not.  Yeah, he might “demand” wild animals only on his show, but umm, don’t let him be the one to handle them.  He manages to tick off the semi-friendly croc that resides at the Cray’s residence and get “attacked” by a bat…which if you know anything about wildlife, you know their bites carry A LOT of disease; hence his running off on his own after being bitten was not only less-than-smart, but also QUITE entertaining.  *ahem*

In conclusion, it’s a deceptively hard hitting book with an ending satisfying on many levels.  The writing allows readers to visit Florida without ever driving South.  Inside the pages you’ll get swept away by the danger the Everglades and the people in them have to offer, caught up in the emotions, revel in the respect shown for animals and habitats (by most at least) and cheer on the good guys when the cheering is good.  There’s a little something for every reader whether boy or girl, young or young at heart, and a few valuable lessons to walk away with as well.  A definite recommendation for older middle grade readers through adults; if any of the elements discussed appeal to you, you won’t be disappointed.

ARC snagged from the reaching hands of my fellow associates at our local bookstore.  (^_^ …just kidding…well, sorta.)  Special thanks to Alfred A Knopf, a division of Random House Books, for spreading the word on their ever growing catalog and sharing special opportunities to read and share titles like this with all of us.  (THANKS!)  For more information on this title, be sure to stop by their official site.

Sounds like a fun read, thanks for the recommendation.