My sullen new friends had read so many books that I hadn’t and had already, by twenty-three years old, become fluent with so many terms, ideas, and words that I had never heard of.  And they could put sentences together in class using so many of them that I was sure if I tried to contribute to the discussion, it would be instantly discovered that I had been accepted by accident, that someone had messed up and put my application in the wrong pile.  In the world I had occupied before coming to this campus, I was the one with the words.
-- pg 96, Blood, Bones, and Butter by Gabrielle Hamilton (ARC)


This one was slow to draw my interest but it accomplished it about 30 pages or so ago now just after we learn about the author’s experience at a summer camp…and some wayward lobsters.  Curious to see where we go from here…. 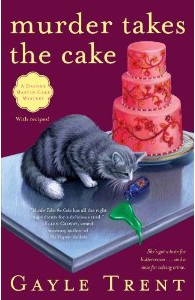 I like the third teaser the best....love the tone! Plus, a serial novel? That's so cool! I believe that is how a few of Dickens' novels were published originally. I hope you are enjoying all of these books.

Blood, Bones & Butter - an interesting title!
I've been hearing good things Murder Takes the Cake. I haven't read many cozy mysteries, but I want to read this one.
A serial novel? How interesting!

I love the look of Murder Takes The Cake.

Juju: Good deal! Off to check out your post...

Christina: If you love the tone in that tease, you've GOT to check out the book. It stays true to what you see/read there.

Misha: Agreed on the 1st. The 2nd I actually haven't heard much about, but good to know. The 3rd, yep...interesting AND good. ^_^

Petty Witter: Agreed! Lovely colors and such a cute kitteh. ^_^

@Christina - Yep, that's how Dickens published a LOT of his work, and it's why _The Mystery of Edwin Drood_ doesn't have an ending!

I've been hearing a lot about Blood, Bones, and Butter, and I want to read that one...and oooh, a cozy that involves cake somehow? I may have to read that!

Kate @ Candlewick: Hey there...thanks for stopping in! Ooh...did not know that about DROOD. On the BONES book, it's got my attention and then it doesn't; final verdict soon. The cozy...it involves LOTS of cake. Pretty sure I'm gonna crave it while reading this one. ^_^

Thanks for sharing. These books sound interesting, esp. the first one.

Three really good bits. I have to say that the first one struck me the most.

I'm loving your third teaser as well! It's such a fun book and I love the whole "serial" idea. I'm a huge fan of the original "War of the Worlds" and "The Count of Monte Cristo" which were all released in that way as well. Such a fun idea!

Oh! And I'm so dying over your second choice! I love that kitty...and the cake. Definitely need to look into getting a copy!

The1stdaughter: See now that's what I'm talking about. you picked my faves out of the bunch as well. ^_^

The Hicky of the Beast looks so funny. Hmm...I need to look into that.

The Hicky of the Beast looks so funny. Hmm...I need to look into that.

What great teaser! I LOVE the title of The Hickey of the Beast and the teaser is awesome! I do have to mention that my eyes are brimming green at Murder takes the Cake! The cover is awesome and I read Dead Pan a bit ago and really liked it. I want to read this one one of these days! I am seriously in the mood to do come cozy mystery reading!

April: Yes, really enjoying that one and the cover is funny but right on target. How? You'll see. Oh...you've read some of her other work? Do tell! This is my first one and so far, so good!