All These Things I've Done by Gabrielle Zevin

Hi there readers!
Welcome back to Satisfaction for Insatiable Readers…the place to FEED YOUR NEED TO READ…and today’s featured title takes that literally to some degree.  Allow me to explain.

Recently I had the pleasure of reading an ARC for an upcoming YA novel, with a curious premise and a glimpse at a (to some people, partially myself included) horrifying reality…I was ready to read all about it and share it with the world.  Then of course, life happened and wouldn’t you know it, it reached published status without my additional fanfare…but that doesn’t mean I still can’t share it with you and who knows?  Perhaps you’ve read it in the mean time and would care to share your thoughts on it!  In any case, let’s dive right in.  Today’s book of choice is…. 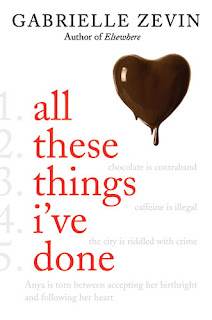 All These Things I’ve Done
By
Gabrielle Zevin

In 2083, chocolate and coffee are illegal, paper is hard to find, water is carefully rationed, and is rife with crime and poverty. And yet, for Anya Balanchine, the sixteen-year-old daughter of the city's most notorious (and dead) crime boss, life is fairly routine. It consists of going to school, taking care of her siblings and her dying grandmother, trying to avoid falling in love with the new assistant D.A.'s son, and avoiding her loser ex-boyfriend. That is until her ex is accidentally poisoned by the chocolate her family manufactures and the police think she's to blame. Suddenly, Anya finds herself thrust unwillingly into the spotlight--at school, in the news, and most importantly, within her mafia family.

Let’s talk cover choice as they seem to play a large role in many a reader’s selection process.  I love the way the title is listed on the front…no, really…as in listed from one to five; plays well with the actual wording if you think about it.  As for the chocolate heart, besides giving you a major craving for a piece of the sweet treat all your own (at least until you read about what happened to someone who…well, you’ll see), it illustrates visually one of those outlawed items in the future.  That’s right my friends…chocolate and caffeine…BOTH ILLEGAL.  *-*  (I’ll give you time to digest that one…)

I mean I can understand it to a degree, they are all addictive to some degree and too much of either can totally mess with your head (and your weight) but outlawed?!  Oye…I can see why a black market would exist for this commodity.  Most would get the shakes just thinking abouttttt ittt... (hehe).  Oh and did I mention that books are SCARCE?  (_faints_)  Yes…there is a black market for PAPER books too and though I’m not one to condone this type of behavior but I would totally be in on this one…how about you?  Any other paper reading rebels with me?  Anywho…back to the story…

It’s an interesting concept for a story, the removal of things many count on today, but that’s not all there is to it.  There’s a bit of a romance that starts out innocently enough between our main lead (Anya) and the newly appointed district attorney’s son (Win).  You can imagine how well THAT combination went over, right?  It’s like cops and robbers being on the same side…at least in Win’s father’s eyes.  There’s a word that comes to mind when we encounter his character…spineless…yep, I said it.  Now grant it, it doesn’t apply to him throughout the entire book because he is truly trying to do some great things with the city but his forbiddance of their romance…ugh!  Really.  Love will do as it likes and simply forbidding it from occurring is just silly…not to mention they are so good together!  Okay, so there’s the slim chance that he might get in the way of some gun play but really, if the mafiya’s daughter AND the district attorney can’t protect him, who can? 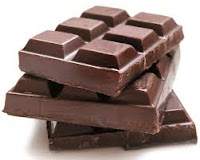 Underneath the love story that rises to the top is Anya’s struggle to come to terms with her future for better or worse.  I love the strength she shows in her character, not just in her personal choices but in those she makes for her loved ones behind the scenes.  She may be only sixteen, but those sixteen years add up to a lifetime of experience with the cards she’s been dealt even with her father keeping her out of the main fray of things.  She had to grow up fast (which is hard) but she held on to those things that make her who she is (family, friends, values) despite the controversy that swirls around her family name.  It’s like being a celebrity but for all the wrong reasons.  People respect you because of your name but is it true respect or respect brought about by fear?  I suppose they are one in the same to some degree but not in Anya’s book and though she may be tangled in the web left behind by her father, she just wants to live a normal life…or at least for those she loves to have the chance to.

Though Anya steals the show, there are several supporting characters that shape and mold the story that are certainly worth a mention.  Scarlet, Anya’s BFF and confidant (to some degree), she’s always there with an ear to lend even if she does often fall for the big sad eyes of innocence falsely thrown her way.  Speaking of those false looks, we have Gable Arsley.  Ex-boyfriend of Anya’s, caffeine-o-holic despite the restrictions, and…totally deserving of that last name.  I mean really, the scene where he stars opposite a blazing plate of school lunch lasagna…classic!  Next we have Win, whom I vaguely mentioned before.  Despite having a dad that’s got his thumb on the pulse of crime, he has a mind all his own and I have to give him props for punching through the obstacles set before him at times.  Natty (kid sister), Leo (older brother) and Nana (guardian/grandmother) all have special roles within the story as well and play integral parts in Anya’s life but I believe their true natures are best uncovered as you progress through the story, so I’ll leave it at that.

All in all, much more than a tale on the hazards of restricting a society from having their fill of caffeine and chocolate; it’s a story showing the hard edge of life in a new light with a lead character not afraid to make her own path even if part of it she only holds partial control over.  She’ll make the best of any situation thrown her way with the skills she’s picked up from the school of hard knocks.  One can only guess as she grows older those choices are going to become stickier and stickier….especially with the way book one ended… (ahem, do I hear a call for book two anyone?  Book two?)

This book was released by Farrar Straus Giroux at the end of September (2011), so it should be readily available on a bookstore shelf near you.  ARC for review (and special chocolate coated coffee beans…nice touch!) received courtesy of Ksenia at MacMillan Children’s Publishing Group.  (THANKS!)  For more information on the publisher as well as their full catalog of available titles, feel free to visit them online.  To discover more about this title in particular, visit the official website and check out the excerpt as well as the post from the author about why she LOVES books!  This is just one of the titles making the rounds on the Pen Fatal Tour…if you haven’t checked it out yet, I suggest you do.  To connect with author Gabrielle Zevin, like her on Facebook or follow along on Twitter.

Until next time….grab a bar of chocolate, a cup of your favorite caffeine heavy drink, and a fresh paper book….and settle in for some happy reading!

Chocolate is illegal? Of all of the scary book reviews that are around at the moment this one sentence frightens me the most. Seriously though thanks for another thorough review.

I got this book for review, too. It sounds really interesting and unique. I love the idea of what's banned. Looking forward to reading this one!