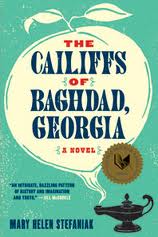 It may seem obvious to you that my brother Force was not an Arabian prince switched at birth, and that Miss Spivey had indeed made up a story, possibly one that she did not expect me to believe any more or less than I believed in Alaeddin and his lamp.  I was eleven, after all, old enough to know better.
-- pg 75, The Cailiffs of Baghdad, Georgia by Mary Helen Stefaniak

If that voice sounds strong for an eleven year old, you're right...it does...but does it not also evoke that classic work of fiction that works its way on the scene during Banned Books Week (as well as many other times throughout the year)?  You know the one...initials TKAMB?  Another romp through Southern literature, thus far...I'm enjoying it immensely.

A great teaser, I loved the Arabian Night tales as a girl.