The Scholar, the Sphinx and the Shades of Nyx by Alison Reeger Cook

Hi there!
Welcome back to the site that aims to please the reader in you every day of the week....Satisfaction for Insatiable Readers.

Today, I thought I'd kick off our week with a recent read from the Young Adult genre that's sure to garner your attention....if it hasn't already that is.  It's a relatively recent release from a first time author that we can expect to see more from in the future, especially as this is book one in a planned series, and I for one will certainly be on the lookout those future publications.  Ready to make the acquaintance of this possibly new-to-you author's work?  Let's!  Today's book of choice is.... 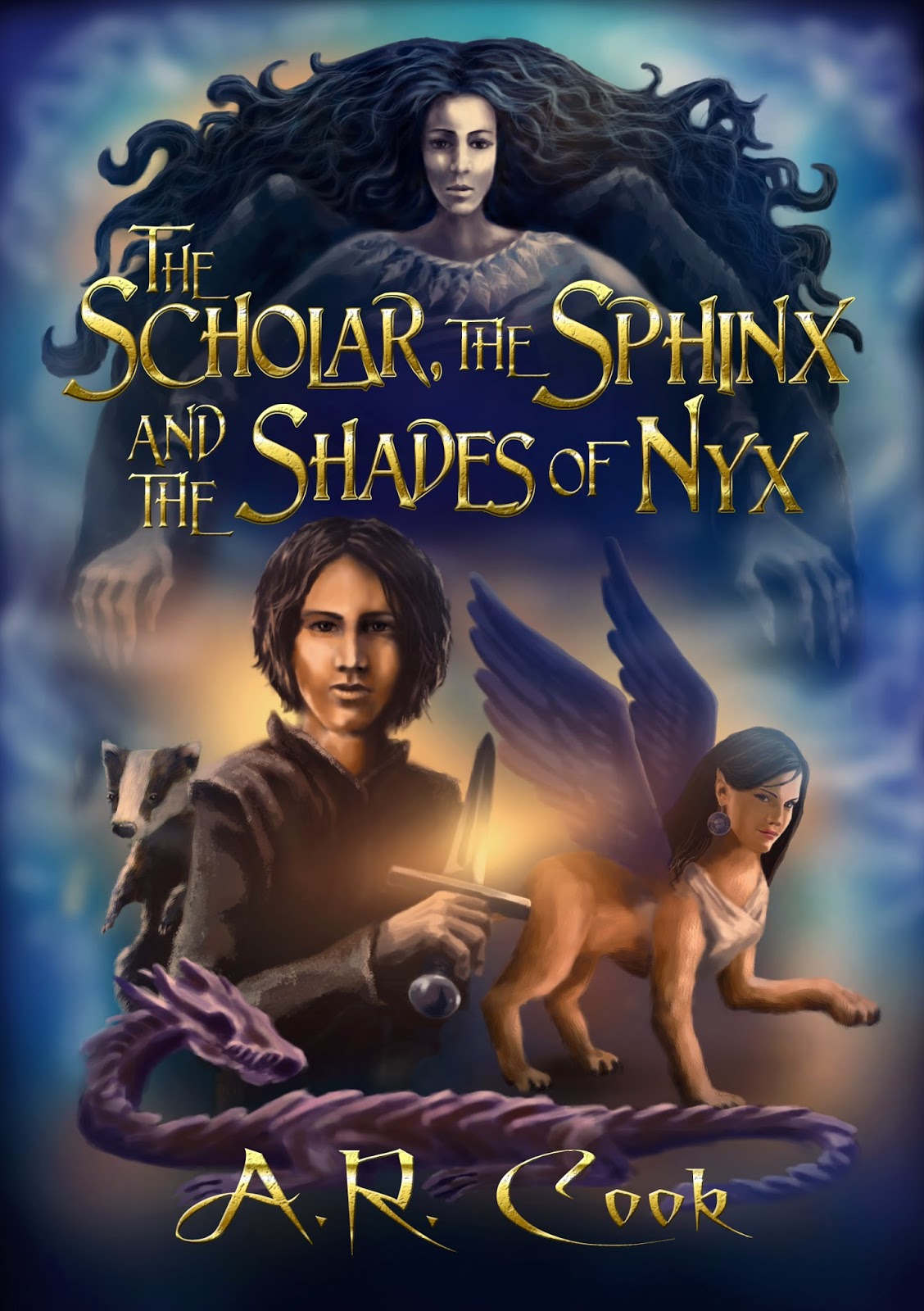 The Scholar and the Sphinx, Book 1:
The Scholar, the Sphinx and the Shades of Nyx
By
Alison Reeger Cook
9781908483874
Knox Robinson Publishing

Cervera, Spain, 1852.  David Sandoval is a sixteen-year-old genius on many different subjects, yet he is more content studying than becoming close with family or friends.  He accepts an apprenticeship offer from a French architect, and while on his travels to Paris, a foolhardy decision on his part gets him abducted by a gypsy caravan owned by a living Grecian sphinx.  The sphinx, seemingly intrigued by the fearless young man, takes him through the Curtain, the gateway between our world and the worlds of the unseen, where many creatures of myth and legend reside.  When David attempts to escape back through the Curtain to the human world, he learns a dark secret:  a Shade, an extension of the shadowy Night Goddess Nyx, is slowly draining the sphinx of her most precious talents.  Can one normal boy truly undo the inflictions of a goddess, and rescue both the seen and unseen worlds from her dark intentions?

Sounds a bit heady, right?  Ah, but that’s where you’d be wrong and in assuming as much, might pass up the opportunity to get in on the ground floor of this curious new series.

First things first…wanna know how I found out about this book?  It wasn’t in the usual fashion; you know, strolling the aisles of a bookstore or getting a recommendation from a friend and/or fellow reader.  It was at my second job.  Many of you know, job two actually places me in the hallowed walls of our local big box store and being that it is connected to the other locations information wise, the intranet (as in the internal web system) is our source of “knowledge”.  One day, there happened to be what we call a “High Five” (sort of an electronic pat on the back for something well done, a KUDOS if you will) featuring a former employee that was making her writing debut and holding a book signing at the store she use to work at.  I thought…now that’s pretty cool!  Talk about full circle!  Little did I know that the very next day, I’d see an email from the same said featured author in my inbox with a review request.  (^_^)  Small world, no?  Needless to say I as already intrigued by what I had read so my response of “yes” was certainly without delay and so here we are, with me rambling away and still ready to share my thoughts on this read.  Yes, well I will get to the point now, but I thought it a mighty fine story to share first.  Anyway….

You’ve heard it before and you’ll hear it a thousand more times before my blog ever disappears into the ether, I’m not a big fan of highly fantastical reads; you know, the ones that require a working knowledge of everyone, everything and the world at large created solely by the author.  The kind they have classes at the college for because it is THAT involved.  Thought this might sound somewhat along those lines, it’s really not.  A working knowledge of a few basic myths and locales of the world, not to mention a love of reading (LOVE that she built that into the lead character!), will take you pretty darn far in this Young Adult fantasy series…and I’d venture in the future installments, it’ll probably still hold true.

Story wise, it links multiple pasts with somewhat more present times, stepping back and forth between the worlds the Curtain affords us access to.  My favorite would have to be when he landed in Japan.  Not that I’ve held a long fascination with the culture or area, though I wouldn’t mind visiting someday, but the creatures and magical folk he encounters just stuck with me, especially Tanuki.  Anywho, back to that story….the way it’s told, we watch as young David over not too long a span grows into himself, discovering just the sort of “man” he really wants to be rather than the type simply pressed upon him.  The adventure that ensues due to the path he chooses is definitely out of a nightmare as opposed to a fairytale but it keeps us on our toes, wondering where the next turn leads to or the next puff of dragon breath will come from.  What?  Oh, I didn’t mention the dragons yet….no worries, you’ll meet them in due time.  By book’s end, you’ve grown fond of our young potential hero (hey, I won’t be the one to spoil the final outcome!  It’s a treacherous road ahead…ANYTHING can happen!) but you’ll be filled with wonder about the journey still to come and just whom shall make it with you.

Character wise, we’ve already met David and I’ve made a passing mention to Tanuki (the little guy can change shape into almost any critter he wants!).  The Sphinx is an obvious attention grabber as I don’t know a person whose fancy wouldn’t be nabbed by this creature of lore, especially this one as her tendencies don’t seem to play fair with all you might have heard…much to the surprise of our young friend.  Let us not forget about our human friends as well, though the main one of which I am referring is actually more than just your average human.  His name is Gullin and he’s not simply another gypsy from afar but a master huntsman, the gravity of which will be revealed along the course of the story.  He’s rough, he’s tumble, he’s downright unlikable at times, but in the end, he’ll win you over, or at least he did me.

Then there’s Yofune who, well okay, I guess it IS a stretch to put him in the human category as he’s actually…well, something more…but he appears in this form for a good portion of the story so there he shall be cast.  Honestly?  He left me unsettled.  I couldn’t trust him as far as I could throw him and yet, I wanted to…trust him, that is.  Once his story is told, it’s understandable why my feelings split upon his introduction but I’ll let you discover that on your own.  I could continue with my assessment of Nyx or even Hypnos or well, the list goes on and on but then this review would be more of a guide to her world and didn’t we already discuss how that wasn’t needed nor that I like that sort of writing?  (^_^)

In conclusion, a great new Young Adult series that will cater to fantasy fans as well as those simply seeking a bigger understanding of the world and the relationships that life presents us with.  Not everything is love or even like at first sight, but allowing time for the bigger picture to form  is what counts.  This book reminds us, or me at least, that first impressions are important but if you allow your opinion of things to be fully colored by what you already know or THINK you already know, you are sorely missing out.  Something to think about, indeed….and I DEFINITELY like when a book leaves me with a gem like that.

Review copy courtesy of author Alison Reeger Cook.  (THANKS!)  For more information on this title as well as the forth coming books in the series, be sure to seek her out online.  This title is available now via Knox Robinson Publishing, so be on the lookout for it on a bookstore shelf near you.

Wondering where the next breath of dragons breath will come from?Ooh I'm liking the sound of this and what a great cover. Great review as always, thanks.

Tracy: Agreed on the cover...complex yet spot on for the story.

Nice way to find the book. :) And it does sound good. Thank you for finding it.