Today, we're diving between the pages of a book that just celebrated its BOOK BIRTHDAY this week via Vesuvian Books.  My congrats to the author because really...whew!  You've got a doozy on your hands here, and readers...that's the BEST kind of news for all of you.  It came to my attention thanks to Erika at Meryl L. Moss Media Relations, Inc, and from the start, I was curious.  Little did I know how very dark and twisted a path the story would lead me down...one that kept me turning pages well into the wee hours of the morning.  Ladies and gents, grab a flashlight for comfort because there is serious evil ahead and you're not gonna want to sit around in the dark.  *glances around*  Today's book of choice is... 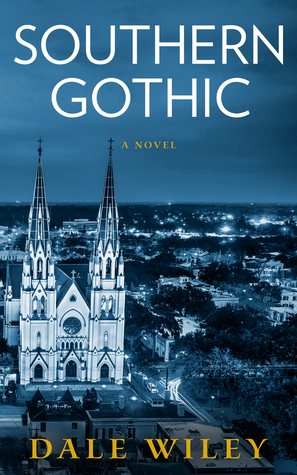 About the book...
Aspiring author Meredith Harper owns the hottest bookstore in Savannah.

Michael Black is her favorite writer—long thought dead—until he mysteriously approaches Meredith with a new manuscript, and a most unusual offer. Meredith can keep the manuscript to herself, or publish it under her own name.

Her decision results in a bestseller, but the novel contains a coded secret; one that will put her on trial for murder and in hiding from "the blood stalker," proving too late that making a deal with the devil comes at a heavy price.

This is one hauntingly addictive read.  From start to finish, I was entranced and the fact that the fiction within the fiction worked so well just speaks to the author's writing talent THAT much more.

Meredith Harper is a modestly successful bookstore owner (Southern Gothic is the name of her store...how cool!) with aspirations of becoming a writer...or at least she DID aspire to become one but a few too many rejections later and that dream went the way of Sleeping Beauty minus the princely awakening.  Still, she has much going for her and life is pretty ducky, until one day, all her wishes start coming true.  Now what was that little reminder about being careful what we wish for?  Oh, right...just that.  BE CAREFUL.

Meredith THOUGHT she was being careful, after all, it's not every day that the author you adore lands on your doorstep (or invites themselves in without your permission or even a key...*gulp*), bringing with him a manuscript so perfect, there's no way publishing houses could say no.  Oh the wicked webs we weave, and Meredith's is about to become EXTRA sticky.  What begins as a fandom dream come true quickly escalates into a nightmare beyond compare, and that's just the half of it.  We won't even get into what happened to the missing wife, or the tortured souls portrayed in 'Red Ribbon' (the novel within the novel), or even the other side of various people you think you know, only to be betrayed in the light of day.  Yes, Meredith...there will be blood spilled...the only question is, will it be yours?

Whew!  Seriously guys, this one blew me away...and with it being divided into three parts (Heaven, Purgatory, and H*ll), how could it not?  It was uber creepy, dark, and twisted with characters you can't help but get lost in and a story line that will keep you glued to the page.   I really felt for Meredith in the beginning.  All she wanted was a shot at her dreams and it blinded her to things she should have recognized, or that basic truth we're taught as youngsters...don't take credit when credit isn't due to you.  As the story progressed, however, while still feeling for her, I had to let go because she had OBVIOUSLY let go of her faculties and it's no fun being the only voice of reason.  I stopped feeling bad for her and just went with the flow...I really want to add "of blood"  because really, SO MUCH BLOODSHED.  Is it any wonder the fictional writing within the story hold water?  What's that?  Oh, yes....we are treated to many chapters of Meredith's re-imagined manuscript., and he may be an enigma, but that "Michael Black" is one talented foe!

In the end, I can honestly say although I was certainly creeped out, it was in the best way possible.  It had a healthy dose of literary fun without losing the overall mystery of the story. The only question I was left with was whatever happened to the car battery?  Guess we'll never really know... *wink*  Highly recommended read for ADULTS READERS (ONLY, due to violence and a few graphic encounters) unafraid of the dark, both outside and within.

Dale Wiley is a Missouri attorney who has had a character named after him on CSI, owned a record label, been interviewed by Bob Edwards on NPR's Morning Edition and made motorcycles for Merle Haggard and John Paul DeJoria. He has three awesome kids and spends his days working as a lawyer fighting the big banks.

Special thanks to Erika at Meryl L. Moss Media Relations, Inc. for the copy for review.  (THANKS!)  For more information on this title, the author, the publisher, or those promotions on the horizon, feel free to click through the links provided above.  This title is available now, so be on the lookout for it on a bookstore shelf or virtual retailer of your choosing.