Today, we're playing host to a Blue Slip Media blog tour starring a Two Lions publication that brings ADVENTURE, DANGER, MAGIC, and MYSTERY to the forefront for the Children's Fiction sector.  That's right.  ALL OF THOSE THINGS and more are what await you just inside the cover of the title we're about to discuss, but I must warn you...it IS the third book in a series and while it CAN be read alone, I think you'll discover (as I did) that "the more the merrier" applies in this scenario.  Ready or not, here comes today's book of choice.. 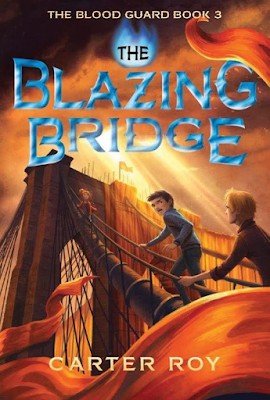 About the book...
Ronan Truelove’s best friend, scrappy smart aleck Greta Sustermann, has no idea that she is one of the thirty-six Pure souls crucial to the safety of the world. But Ronan’s evil father has figured it out—and he’s leading the Bend Sinister straight to Greta. If they capture her, she’ll suffer a fate far worse than mere death. But to get to Greta, they’re going to have to go through Ronan first.

Standing with Ronan are plucky hacker Sammy; witty, unkillable Jack Dawkins; and a sharp-tongued woman named Diz, who drives a dangerously souped-up taxi. One breathless close call after another leads to an ugly showdown: Ronan alone against his father, with the fate of Greta, his friends, and the entire world hanging in the balance. Will Ronan be able to rise up and prove once and for all that he has what it takes to join the Blood Guard?


First things first, that cover is enough to make anyone stop and wonder...am I right?  I mean, is the bridge on fire?  What's with all the ribbons-like scraps flying about?  Why are their children on the support wires of a bridge to begin with?  SO MANY QUESTIONS...the answers to which lie within.

Second things second (because what else would follow first things!), I had the most gosh-awful time trying to keep the characters straight, specifically our leading young man Ronan, aka Evelyn Ronan Truelove.  More specifically than I've been thus far...that he was a HE.  It's not a big deal, but for clarity of the story it became something of a sticky point for me.  It's the name that threw me and as I didn't read the other books, I'm not certain is Evelyn was actually his first name or something particular characters used to just peeve him off and get under his skin.  Anywho, moving on.

Third things third (because...well, you get the point), let's talk story.  So basics...there's The Blood Guard charged with protecting the Pures and the Bend Sinister trying to take them all out for their own nefarious reasons.  Bloodshed is not a problem (and there is some shed), loss of life is to be expected (unless you're one of the few that can't die), and evil is around every corner (Legion...it's a creepy effect used for maximum results!)...but so is good and they come in all shapes, sizes, and personalities (Diz!  Love her!).  It's a motley crew set to save the day and with their will, whit, and determination, there's nothing they can't do.  Even falling off a bridge without a tether!  Even pull a Pure back from utter demise (sort of)!  Even...okay, I'm not going to spoil everything for you, but rest assured the adventure within is going to be rough, tumble, and full of surprises (including a possessed cat!).

Last things last...I gotta go with my gut instincts here, but no matter what anyone tells you, READ THIS FROM THE START.  It's not THAT big a series (three books, possibly in completion...or at least it seems that way at this time) and to get the FULL experience, it's really a tad necessary, at least from my vantage point.  All in all though, despite those things I felt I was missing here and there, the story did still manage to keep my attention.  It was great seeing young heroes taking charge of their destinies without uber-fascinating super powers and what not.  It just goes to show you that you can do anything you put your mind to (including project things...inside joke) and to never underestimate the little guy. 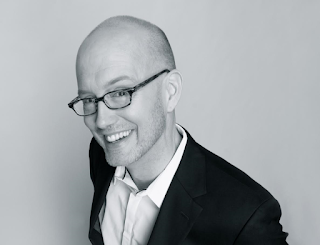 Carter Roy has painted houses and worked on construction sites, waited tables and driven delivery trucks, been a stagehand for rock bands and a videographer on a cruise ship, and worked as a line cook in a kitchen, a projectionist in a movie theater, and a rhetoric teacher at a university. He has been a reference librarian and a bookseller, edited hundreds of books for major publishers, and written award-winning short stories that have appeared in a half-dozen journals and anthologies. His first two books were The Blood Guard and The Glass Gauntlet. He lives with his wife and daughter in New York City and can be found at www.carterroybooks.com or on Twitter @CarterRoyBooks.

Special thanks to Barbara and Sarah at Blue Slip Media for the copy for review and chance to bring this tour to you.  (THANKS!)  For more information on this title, the author, the series, or those tours on the horizon, feel free to click through the links provided above.  This title just celebrated its BOOK BIRTHDAY February 21, 2017, so be on the lookout for it on a bookstore shelf or virtual retailer of your choosing.

BEFORE YOU GO...
...how would you like a chance to WIN THE COMPLETE SET? 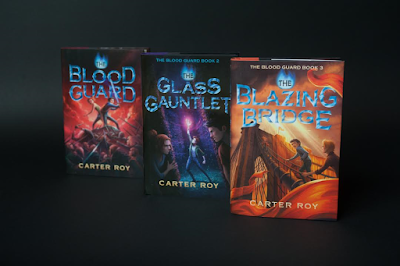 That's right!
ONE LUCKY WINNER will receive a complete set of The Blood Guard series!  This includes...THE BLOOD GUARD, THE GLASS GAUNTLET, and THE BLAZING BRIDGE!  All you have to do to enter is fill out the Rafflecopter form below and you're in it to win it.

The rules...open for entries TODAY through 03/10/17 CST.  US addresses only; no P.O. Boxes please.  Winner will have 48 hours to reply with their complete mailing address to be passed on to the publicist for prize send out.  If not response is received, a new winner will be chosen.  SFIR is not responsible for lost prizes.

Thanks for this captivating feature and giveaway. What an intriguing and special adventure this would be. An ideal book for my grandsons who would enjoy it greatly.